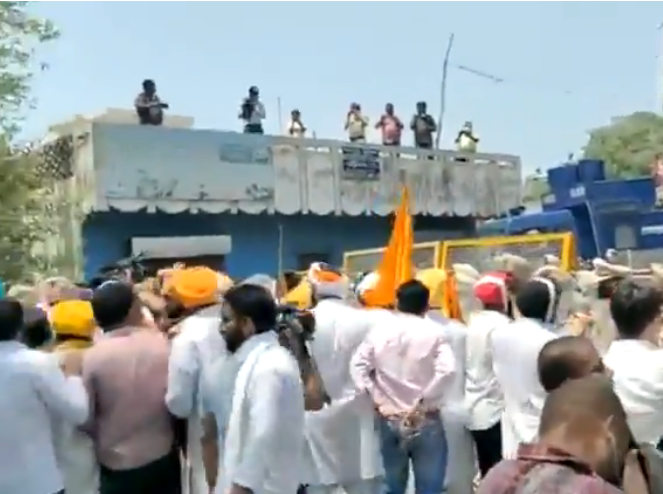 Amid huge protest outside the Punjab Chief Minister Amarinder Singh’s residence in Chandigarh, the Punajb police on Tuesday detained the Shiromani Akali Dal chief Sukhbir Singh Badal as he was leading the protest to demand the dismissal of state Health Minister Balbir Singh Sidhu.

Amidst the Covid-19 pandemic, hundreds of protesters – carrying party flags – marched together despite heavy barricading, triggered the security forces resorted to use water cannons.

Badal has sought a CBI probe into the alleged irregularities in the sale of vaccines and procurement of Covid-19 kits for the patients. Badal said the state government has engaged in various scams from vaccinations to scholarships and farmer lands being acquired.

Before his arrest, the Akali Dal chief said if a storm rises, Captain won’t be able to stop it, even if he uses all his force. He said that there is a scam in Covid vaccination and also in schedule castes scholarship. He also alleged that farmers’ land is being acquired.

The state president of the party’s new ally BSP, Jasbir Singh Garhi, has also joined the demonstration. Last week, the Akali Dal and the BSP had announced they will contest the state elections together.

The Akali Dal broke ties with the BJP last year over the contentious farm laws, which led to massive protests.

Several AAP leaders and workers, led by party MLA and leader of opposition Harpal Singh Cheema, raised slogans against the government and demanded dismissal of cabinet minister Sadhu Singh Dharamsot along with the release of pending amounts under the post-matric scholarship for scheduled castes.

The opposition leader is targeting the Amarinder Singh government over the issues just months ahead of the state elections, due next year.

This protests also come at a time when the Congress is handling infighting in the state.

Himachal unlock begins with most of Delhi, Punjab making beeline to Shimla