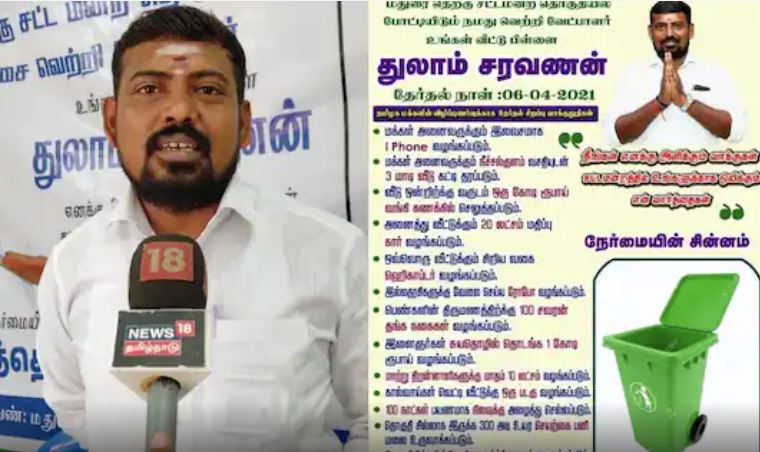 Ahead of Tamil Nadu assembly elections starting from April 6, candidates have been filing nominations and releasing manifestos promising people welfare schemes in case they win the polls. Following which, a 34-year-old Independent candidate Thulam Saravanan from South Madurai has promised the moon to the voters if he wins the election. Yes moon!

Starting from an iPhone, a car, helicopter, a boat robot and much more, the candidate has listed a number of outlandish welfare schemes in his manifesto. Releasing his manifesto, Saravanan promised that if he won, he will provide every household with one iPhone, a car, a helicopter, a boat, a robot, a three-storied house with a swimming pool, Rs 1 crore for youths and a 100-day vacation to the moon.

Thulam Saravanan is an independent candidate contesting from the Madurai South constituency. His manifesto and its outlandish promises have certainly grabbed attention in the constituency where there are 13 more candidates.

The journalist-turned-candidate told the NDTV that his aim is to raise awareness against people falling for freebies by political parties. he said he want them to choose good candidates who are ordinary and humble.

He also slammed the political parties for turning politics into a money battle and ignoring people’s welfare. He also said such politicians and political parties have polluted the state politics and have turned it to be the preserve of the rich.

When questioned about the outlandish manifesto, he responded that for the past 50 years, political parties have won elections by announcing welfare schemes. Their governments never served the people. He has admitted that he released manifesto to create awareness.

With so much at stake, political parties in Tamil Nadu have taken populism to a new high even though the state is in a five lakh-crore debt. Following the big promising trends, the ruling AIADMK promises free washing machines, monthly payment of Rs 1,500 for housewives, six free cylinders for every family and a government job for every family among others.

On the other hand, It’s main rival DMK has promised to cut petrol price by Rs 5 a litre, and diesel by Rs 4 a litre, free tab with internet. Kamal Haasan’s MNM first mooted the idea of a salary for housewives, promises Rs 3,000 every month, free computers with internet in all homes as a public resource to access government schemes, good governance and 50 lakh jobs.

In 1967, the DMK offered every ration card holder around 4.5 kg rice for a rupee. After winning the elections, it could not deliver on its promise while AIADMK in its 2011 election manifesto offered 20 kg rice free to every ration cardholder. In 2006 the DMK offered a free colour TV to every home. Since then parties have promised mixers, grinders, fans, laptops, etc.