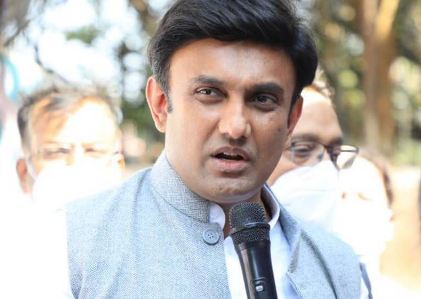 Karnataka Health Minister K Sudhakar’s statement daring the Opposition to come clean on their illicit or extramarital affairs by undergoing monogamy test, sparked controversy in the political circle on Wednesday.

As the row escalated and drew flak from MLAs, Speaker and Opposition leaders, Sudhakar later said his statement was misrepresented and that he regrets it if it hurted anyone. No one bothered when Congress deliberately tried to defame six ministers, but my statement asking them to instropect has hurt them. I request them not to take any statement literally but understand the pain and anguish of my words, he said.

Taking the names of Opposition Leader Siddaramaiah, Karnataka Pradesh Congress Committee (KPCC) president DK Shivakumar, former chief minister and JD(S) leader HD Kumaraswamy, Sudhakar, while speaking to reporters in Bengaluru, had said that leaders from Congress and JD(S) are projecting themselves as ‘maryada purushas (well-behaved gentlemen) and ‘Sri Ramachandras’… let there be an investigation on this for all 225 MLAs, as none is untouched by this. He also said, let it be proved who has had illicit relationships or not, including himself.

His statement came in response to the Congress MLAs including Leader of Opposition Siddaramaiah who have been demanding the resignation of him and five other ministers on moral grounds after they obtained a gag order from court on media broadcast of any CD or other material likely to defame them.

Those six ministers had moved the court for injunction after one of their colleagues Ramesh Jarkiholi resigned  amid allegations of sexual harassment after the a purported sex video involving him emerged earlier this month. However, the latter has termed it a fake.

Among the top Opposition leaders, Siddaramaiah, HD Kumaraswamy, and DK Shivakumar, have condemned Sudhakar’s statement. While Kumaraswamy said such remarks were uncalled for, Siddaramaiah said it could have been avoided as it affects the sanctity of the House.

Further, Shivakumar said that he has one wife and one family. I’m very happy. Pointing at Sudhakar, he added that he has given precious words to the state, the matter will be discussed in the Assembly after discussions with our leaders as it involves everyone, he added.

Tamil Nadu candidate’s promises: Free chopper for everyone, iPhone, trip to moon (why not)