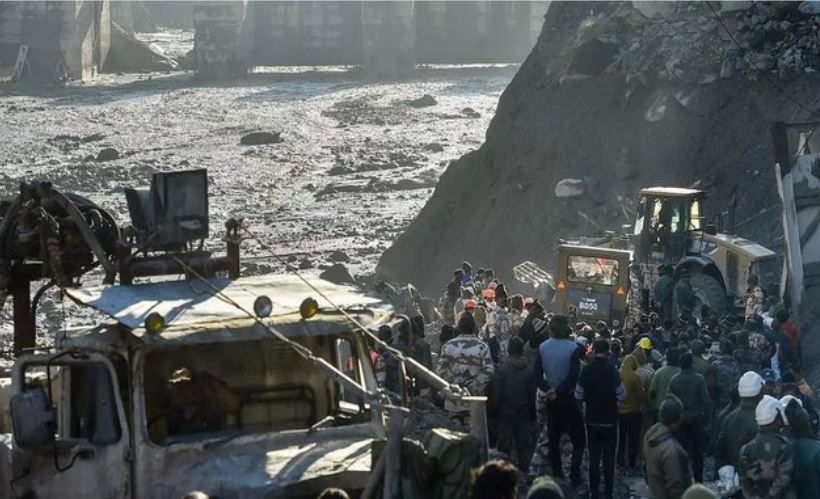 A massive operation led by a joint team of the ITBP, Indian Army, SDRF and NDRF is underway to rescue 39 people, which include power plant workers, trapped inside a tunnel after the glacier burst in Uttarakhand’s Chamoli district.

The search and rescue operations continues in full swing for the second consecutive day at Joshimath in Uttarakhand’s Chamoli dsitrict and higher reaches of the Himalayas. As many as 18 people are reported to be dead while authorities claim more than 200 people are still missing from the glacier burst incident which wreaked havoc in Uttarakhand’s Chamoli district on Sunday.

A joint team of ITBP, Army, SDRF and NDRF has entered the Tapovan tunnel to rescue the trapped people. The team is finding it difficult to make way inside the tunnel due to slit and dirt but nevertheless making a monumental effort to retrieve the people trapped inside the tunnel. The team had earlier managed to enter the 12-foot high and 15-foot wide tunnel at Tapovan and reach about 100 metres before they were forced to retreat as sludge and water blocked their way.

Meanwhile, the state officials confirmed that the death toll in the disaster reached 18 on Monday while more than 200 people were still missing, a day after a portion of the Nanda Devi glacier possibly burst through its banks at Joshimath. The missing people include those working at hydroelectric power project sites as well as the villagers.

Two power projects – NTPC’s 480 MW Tapovan-Vishnugad project and the 13.2 MW Rishi Ganga Hydel Project – were extensively damaged with scores of labourers caught in tunnels as the waters came rushing in.

While Indian Air Force teams left for the affected areas to ramp up relief efforts, personnel from multiple forces worked through the night. The state officials said 27 people were rescued alive. Of these, 12 were saved from the smaller of the two tunnels at the Tapovan-Vishnugad project site and 15 from the Rishi Ganga site.

With no clarity on what led to the disaster and experts pointing to climate change, scientists also headed to Chamoli to understand what had happened.