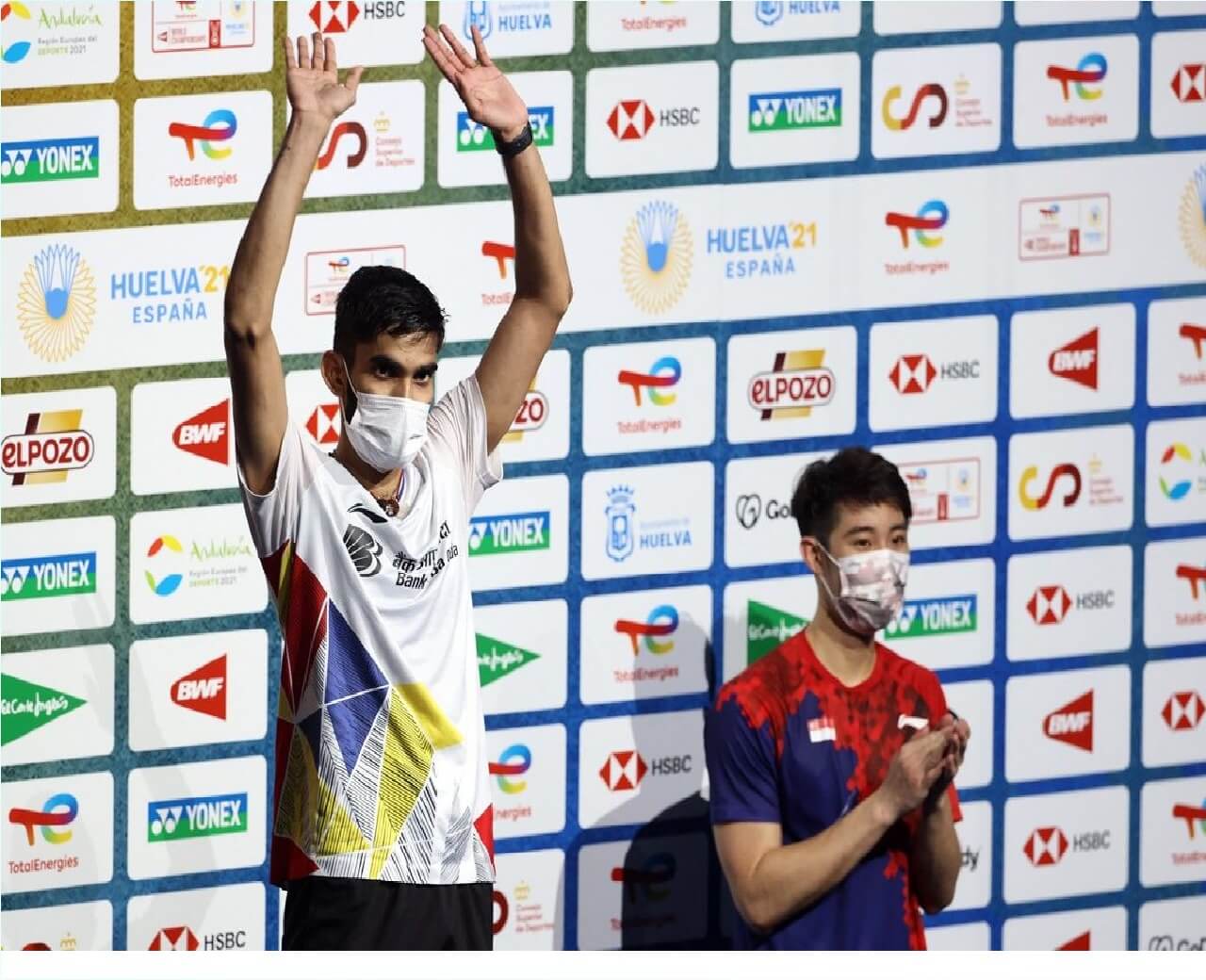 On Sunday, December 20, 2021, Indian badminton player Kidambi Srikanth created history. He is the first Indian man to win a silver medal at a World Championship.

In a vigorous match against Singaporean shuttler, Loh Kean Yew, Srikanth won a silver medal for India. From the beginning, his game was aggressive. After two sets that lasted for 43 minutes, Loh Kean Yew dominated the final blow. Srikanth lost 15-21, 20-22, but still created history.

Followed by his World Championship final, Srikanth shared his joy. He said that despite playing exceedingly well in some matches and not being able to perform in some, he learned a lot. The hard work and practice he has been doing for years bought him to this stage in his badminton career, the silver-medalist said. He also mentioned the prospects of 2022, which brings along some major events like the Commonwealth Games, Asian Games and World Championship.

Kidambi Srikanth shared how uncertain he was about being able to even qualify this year. He walked in the court with an aim to stay positive and not make any mistakes. His opponent pressed on how Srikanth’s game has improved a lot.

The former world number one is all set to jump his way up the ladder from the current 15th rank. After clinching the historic silver at the World Championship held in Huelva, Spain, Srikanth vowed to win the title next time. He also said that he will try his best to stay optimistic.

Lakshay Sen also bought a bronze back home. Sen is the third Indian male to win a World Championship bronze medal. Prakash Padukone and Sai Praneeth won bronze in 1983 and 2019 respectively. This is indeed a golden period for Indian Badminton.

The Indian athletes had racked up the medal tally to 61 total medals, out of which 22 are gold, 16 are silver and 23 are bronze. 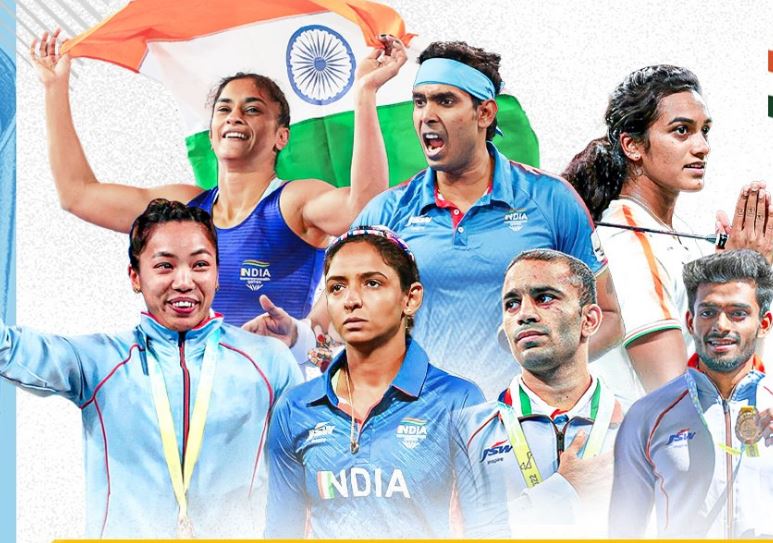 The Indian athletes have done a stellar job with their performances in the Birmingham Commonwealth Games 2022. As the Indian athletes kept the trend going for picking up medals and racking accolades under their names, they garnered a lot of admiration from the country as well.

Many celebrities, sports persons and the Prime minister himself came forward for showering their adoration and support for the athletes who made India swell up with pride. From the poster boy of Indian cricket Virat Kohli to Prime Minister Narendra Modi, here are all the people who came in support for the Indian athletes during their CWG 22 campaign:

The former Indian skipper was among the lot of people who came out with in support with admiration for the Indian athletes for their stellar performances throughout this edition of Commonwealth Games.

Indian cricketer Dinesh Karthik, also followed the Commonwealth Games for more reasons than one. The star cricketer is married to Indian squash player Deepika Pallikal, and wanted to show his love and support for his partner. Pallikal alongside Saurav Ghosh claimed a bronze medal in the mixed doubles and added to India’s tally.

Virender Sehwag, the Indian Cricket legend, has been actively following the Commonwealth games 2022. He has congratulated all the athletes throughout their campaign via his Twitter. Notably he recently posted and celebrated the win of wrestler Vinesh Phogat, Ravi Dahiya and wrestler Naveen Kumar, who had brought home 3 golds in wrestling for India.

The Bollywood actor, Tapsee Pannu, hasn’t shied away with her remarks and praise for the Indian team in the Commonwealth games 2022. She closely followed the multi-sport event and had been quite vocal with each win from India. She congratulated each athlete on her twitter. Taapsee came up with a special appreciation tweet towards the Indian badminton team for their commendable performances. .

The Indian football Skipper and veteran, Sunil Chettri, hasn’t been following every match of India but was able to make time for P.V Sindhu’s Badminton final. He praised Sindhu for her phenomenal performance in the Birmingham Commonwealth Games 2022.

The veteran Bollywood actor, Anil Kapoor, who is not an avid sports fan, found himself in complete admiration for the athletes and their immaculate performance throughout the Campaign of CWG 2022. The Bollywood actor congratulated all the Indian athletes for making the country proud.

The prime minister of India, Narendra Modi had also congratulated each athlete separately via Twitter and praised them for their extremely brilliant performance in putting India’s name in the top 4.

The prime minister had congratulated the Indian badminton Phenom, P.V Sindhu, and Indian Table Tennis legend Sharath Kamal, for their brilliant performances and in successfully bringing gold in their respective sports.

The Indian athletes had racked up the medal tally to 61 total medals, out of which 22 are gold, 16 are silver and 23 are bronze. India beat New Zealand for the race of 4th position in the overall medal standings, whereas Australia is leading the Table as usual.

This edition of Asia Cup is being played in the 20-over format and only two venues have been finalized for the 16 days tournament. The Board of Control for Cricket in India (BCCI) has announced the Indian Squad for the upcoming Asia Cup 2022. Skipper Rohit Sharma will be leading team India while Vice Captain KL Rahul will mark his comeback with this mega commencing in the United Arab Emirates (UAE) from August 27 onwards.

Team India will begin its campaign at the Asia Cup 2022 in with a heavyweight clash against their arch-rivals Pakistan on August 28. While Pakistan thrashed Indian batters and bowlers when they last played against each other in the ICC T20 World Cup, this time Men in Blue would look forward to avenge the defeat. With ICC T20 World Cup 2022 approaching, both the teams would want to stamp their authority.

However, Indian fans also have a reason to be upset. The Indian star bowler Jasprit Bumrah has been ruled out of this tournament due to his back injury. The Indian pacer has been sent to rehab at the NCA camp Bengaluru.

But the good news is that not only vice-captain KL Rahul will make a comeback but also former skipper Virat Kohli will also comeback for the Asia Cup 2022. However, Harshal Patel is also ruled out due to his injuries.

The Men in Blue will begin its Asia Cup campaign on August 28 against Pakistan. Then they will next play the Qualifying team match on August 31. The 5 teams qualifying for this tournament are India, Bangladesh, Sir Lanka, Afghanistan and Pakistan.

This edition of Asia Cup is being played in the 20-over format and only two venues have been finalized for the 16 days tournament. The initial matches will be played at Sharjah and qualifiers and final will be played in Dubai. For those who don’t know, India is the most successful team of this tournament with most titles (7), followed by Sri Lanka with 5 wins.

Former South Africa born international cricket umpire Rudi Koertzen has passed away at the age of 73 on Tuesday. As reported, Rudi died after a fatal car accident when he was heading back home from Cape Town after a golf weekend.

Rudi Koertzen was heading to his residence at Despatch in Nelson Mandela Bay but he met with the accident in the Riversdale area and died instantly.

For the unversed, Rudi Koertzen was one of the highly respected cricket umpires. He has refereed in nearly 400 international matches. The South Africa born served as the field umpire in 209 ODIs, 108 Tests and 14 T20Is in his umpiring career spanning nearly two decades.

Rudi Koertzen is the second umpire to have achieved this milestone after Aleem Dar exceeding those numbers in Tests and ODIs. Rudi also served as the TV umpire in 20 Tests, 41 ODIs and five T20Is.

Those who remember the international cricket umpire, would also know that Rudi had a unique style of umpiring. He used to slowly raise the dreaded finger to rule the batsman out, making it a memorable one. Koertzen also use to replace the white cap with a round hat with the sunglasses on it, making it his key dressing.