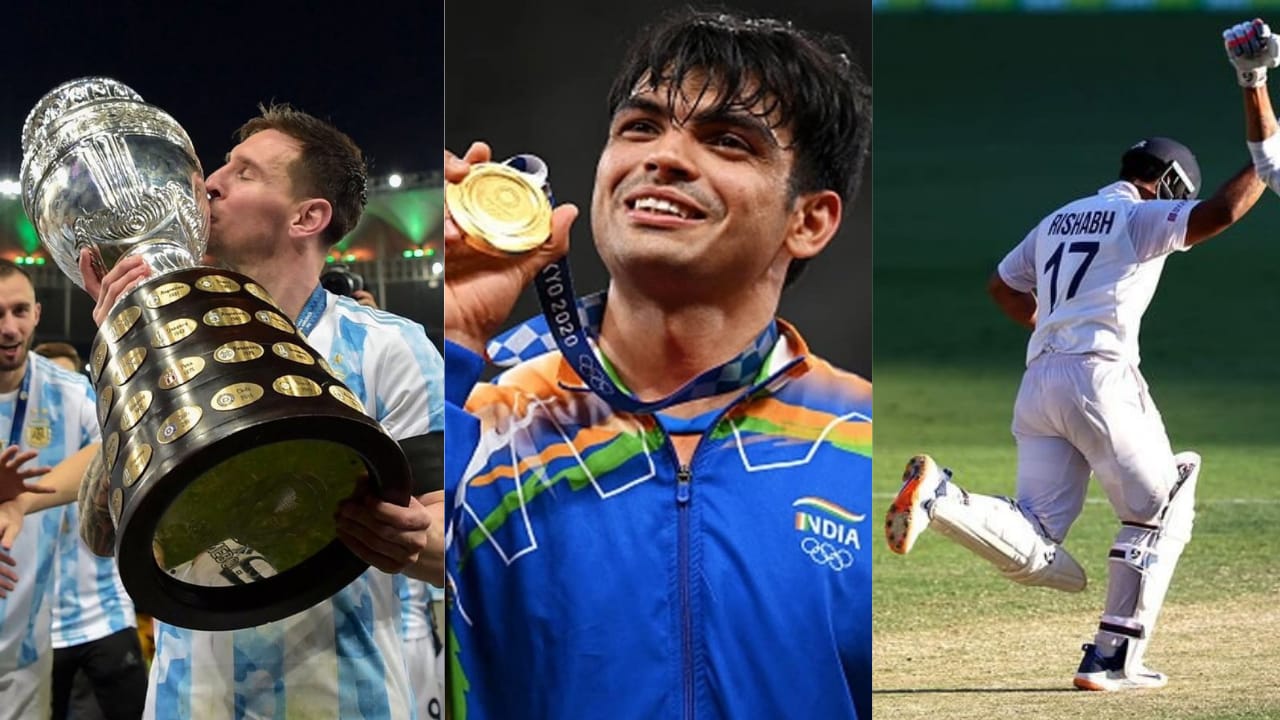 2021 has been a year unlike any for sport and sports lovers and will go down as a memorable one in the shadow the virus. In sport, there are many moments that stay in our minds beyond the runs, goals and trophies. These moments remain etched in our memories forever. Many teams scripted history while they were on peak, whereas sportspersons across the world achieved unimaginable highs. In 2021, many people lost their lives, lost hopes due to the coronavirus pandemic across the world, but it was the sport that gave motivation and opportunity to the people to celebrate life. Nothing and absolutely nothing deterred the will and motivation in the sport even when the world, as we knew it, perished under Covid-19’s onslaught. From football, cricket, tennis, and the deferred Olympics, we saw many glorious moments. Let’s have a quick recap of 2021.

Lionel Messi ended the trophy drought for his national team after Argentina beat Brazil to lift their first international title after 1993. This was also Messi’s first international trophy with his national team. Before that, Messi had led Argentina to FIFA World Cup final in 2014 and the Copa America final in 2015 & 2016. The year also saw the Blaugrana legend swap shirts and turn out for Paris Saint Germain.

2021 was also a very strange year for sports, as no one would have predicted that the captains of Spanish rival clubs Real Madrid FC and FC Barcelona will be playing for the same team. Yes, it happened in 2021, Lionel Messi and Sergio Ramos both left their iconic clubs in dramatic exits and landed at the same club, Paris Saint Germain. While Portuguese legend and former Real Madrid forward Cristiano Ronaldo left Juventus after three seasons in Italy and ended up at his former club Manchester United, after a brief heartattack for the United faithful when reports said he was headed to the other Manchester team.

After failing to make it to the 2018 FIFA World Cup in Russia, Italy announced their comeback in international football in a grand fashion by winning the European championship. Manager Roberto Mancini engineered the Azzurri to their second Euro title after beating England, again tantalisingly close, in a penalty shoot-out at Wembley. The Italians steamrolled through the tournament which was marked by Christian Eriksen’s collapse for Denmark.

This year the Balon d’Or was awarded to former Barca and Argentina legend Lionel Messi. It was his 7th (most) in his collection. However, the sporting world was divided over this year’s Balon d’Or winner and many described this as a ‘scandal’. German media and some English media including The Guardian declared Lewandowski as the stand out player of the year.

The Premier League already has some of the richest owners in club football. But no one imagined that Newcastle United will be bought by the richest owners of all. Saudi Arabia Public Investment Fund owned by Mohamed Bin Salman took over the Magpies. After the official announcement, Newcastle fans celebrated outside the club and in the city.

Until this year January, no team had beaten Australia in a Test match at Brisbane’s Gabba stadium in the last 33 years. The Gabba was an impenetrable fortress with its bouncy pitch and home-crowd advantage for the Aussies. But stand-in skipper Ajinkya Rahane’s team finally breached the Gabba fortress. Wicketkeeper-batsman Rishabh Pant shone bright in the match with his unbeaten 89. India went on to win the series for the first time in Australia.

2013 was the year when India won an ICC trophy last time. Since then, the Men in Blue have lost in knockouts in various ICC tournaments, including the 2014 final defeat to Sri Lanka, the 2017 ICC Champions Trophy against arch-rivals Pakistan, and recently the 2021 World Test Championship final against New Zealand. The Kane Williamson-led Kiwis thrashed the Men in Blue by 8 tickets in the World Test Championship final at the Lords. All these defeats came during Virat Kohli’s captaincy. During his 7 years as captain, India had not won a single ICC tournament.

India’s finest captain MS Dhoni once again led his IPL franchise Chennai Super Kings to the title. Earlier in the 2020 season of the cash-rich cricket tournament, CSK finished second last on the points table, but in 2021, the MS Dhoni-led franchise became the first team to qualify for the playoffs. CSK handed a 27-run defeat to Eoin Morgan’s Kolkata Knight Riders in IPL 2021 final to clinch the title for the 4th time.

India defeated New Zealand in the Mumbai Test match and won the series, but it was New Zealand’s Ajaz Patel who stole the limelight. The 33-year-old Patel took all 10 wickets in a Test match innings and equalled the record of Anil Kumble and Jim Laker.

2021 didn’t end on a positive note for Virat Kohli. After India’s poor performance in the T20 World Cup, he voluntarily stepped down from T20I captaincy. But Virat was sacked by the BCCI from the ODI captaincy. Reports suggest the BCCI had given him a 48-hour ultimatum to resign from ODI captaincy. But the 33-year-old claimed he was informed 90 minutes prior to India’s team selection for the South Africa tour. BCCI appointed Rohit Sharma as the new captain to lead the Indian side in white-ball cricket. BCCI boss Sourav Ganguly has since then ducked the fast-rising Kohli bouncer with great elan.

In a nation beset with vegetarian-loving people, winning a javelin throw gold at the Olympics is special. The 24-year-old Haryana boy scripted history at the Tokyo Olympics and won the first-ever gold medal in the track and field category for India. Chopra delivered on the biggest stage by throwing his javelin farthest (87.58 m). He became the second Indian to win an individual gold in the Olympics after shooter Abhinav Bindra in the Beijing Olympics 2008.

Former World no. 1 doubles Chinese tennis player Peng Shuai accused Zhang Gaoli, China’s former vice-premier, of sexual assault. The news spread like wildfire in the whole world, but she reportedly went missing. Concerned over her whereabouts took the sports fraternity by storm. However, a few weeks later a Chinese website claimed that the allegation was false and Peng Shuai is ok. The Communist Party of China seems to have blanked out all traces of the story now.

In tennis, 2021 belonged to 20-times Grand Slam title winner, Serbian Novak Djokovic. The 34-year-old went on to win three of the 4 Grand Slam titles of the year, the Wimbledon, Australia Open, French Open. However, his dream to win all 4 titles to complete his Grand Slam was shattered by Russia’s Daniil Medvedev, who clinched his first-ever Grand Slam at the US Open.

Emma Raducanu fairytale at US Open

In one of the most dramatic finishes in Formula One history, Max Verstappen won the Abu Dhabi Grand Pix with his insane final lap over former champion Lewis Hamilton. Not all were convinced but Verstappen did win the chequered flag!

Kerala-based athlete Paul jumped 17.03 meters in his third attempt and became the first jumper to clear 17 meters in the CWG. Aboobacker jumped 17.02 metres in his first attempt and won silver. 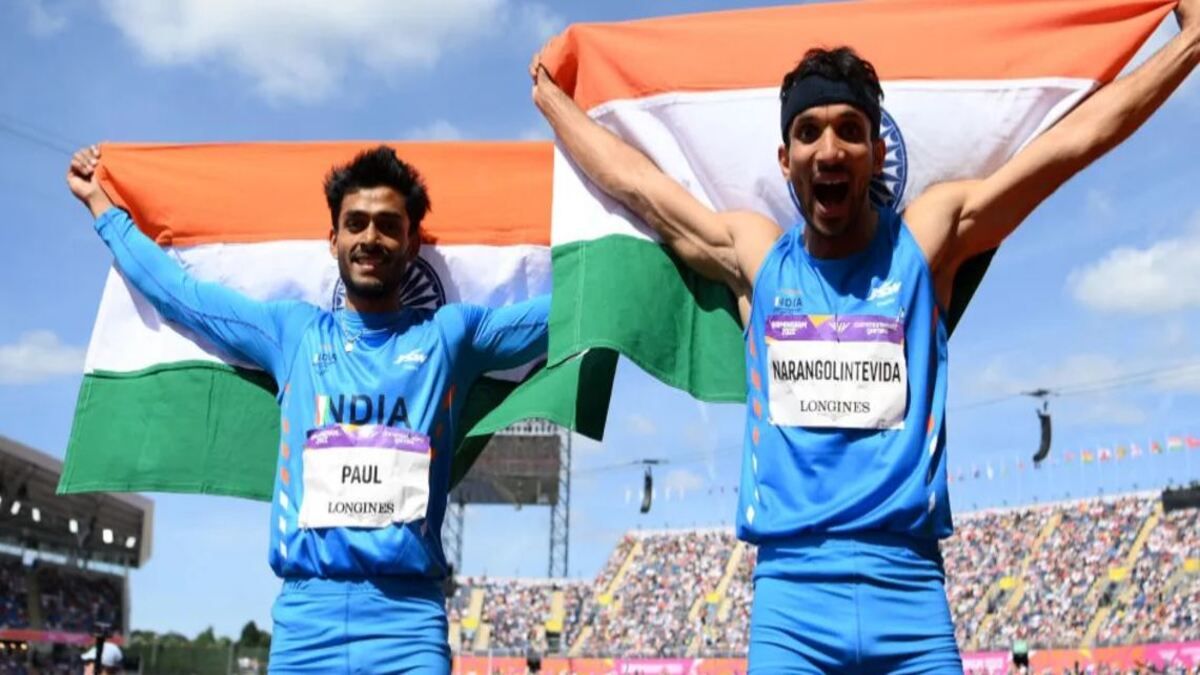 India’s Eldhose Paul scripted history by winning the gold medal in the men’s triple jump final at the Commonwealth Games in Birmingham on Sunday. Last month, he also became the first Indian triple jumper in the world athletics championship final.

Another player Abdulla Aboobacker won silver in the same game. It was Indian men’s first ever 1-2 in CWG athletics. Bermuda’s Jah-Nhai Perinchief won a bronze medal in the men’s triple jump.

Kerala-based athlete Paul jumped 17.03 meters in his third attempt and became the first jumper to clear 17 meters in the CWG. Aboobacker jumped 17.02 metres in his first attempt and won silver.

Praveen Chitravel finished at the fourth position with the best jump of 16.89 metres in his third attempt.  Another Indian Perinchief too had the lead in his first attempt.

Australia is at the unshakeable top spot after winning 155 medals in total, with 59 golds, 46 silvers and 50 bronzes included. They are followed by the host, England with 148 medals, Canada is at the third position with 84 medals and New Zealand is at the fourth spot with 44 medals, leading ahead of India with a difference of just 4 wins.

India on the other hand is at the fifth spot with 14 gold, 12 silvers and 16 bronze and is also marching ahead of Nigeria with a difference of 8 medals. After keeping the form of Indian athletes in this multi-sport event, it is safe to say that India can easily end up at the fourth spot out of 72 countries participating in the Birmingham CWG 20222. 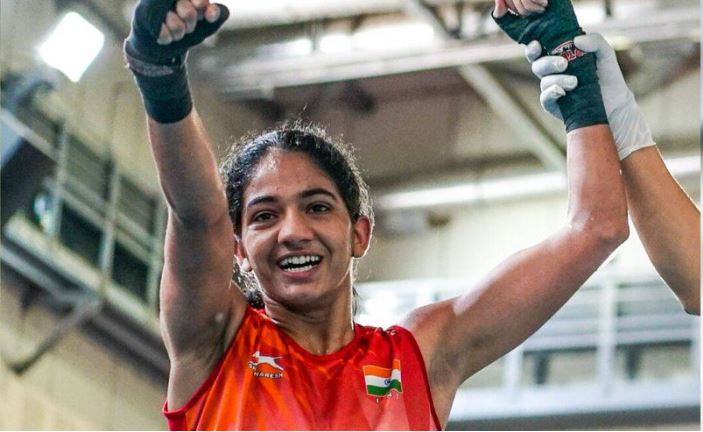 And later in the day, Rohit Tokas won bronze in men’s Welterweight Category of boxing (63.5-67kg). And just in! Indian Boxer Amit Panghal has won a gold medal in the 48-51kg weight category defeating England’s Kiaran Macdonald by 5-0.

At the Delhi Commonwealth Games when India was at the second position with its best ever score of 101 medals. 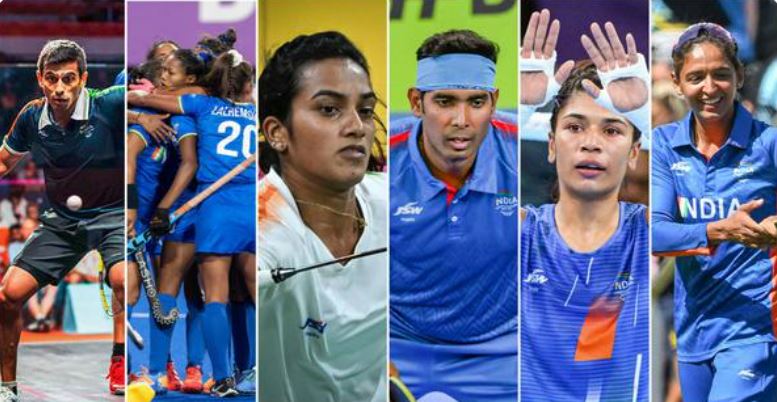 The Indian athletes are leaving no stones unturned to hoist Indian flag the highest at the Birmingham Commonwealth Games 2022. With 40 medals in total, India has cemented its position in the top five of this edition’s medal tally.

Australia is at the unshakeable top spot after winning 155 medals in total, with 59 golds, 46 silvers and 50 bronze included. They are followed by the host, England with 148 medals, Canada is at the third position with 84 medals and New Zealand is at the fourth spot with 44 medals, leading ahead of India with a difference of just 4 wins.

India on the other hand is at the fifth spot with 13 gold, 11 silvers and 16 bronze and is also marching ahead of Nigeria with a difference of 10 medals. After keeping the form of Indian athletes in this multi-sport event, it is safe to say that India can easily end up at the fourth spot out of 72 countries participating in the Birmingham CWG 20222.

But for the unversed, who are thinking this is the best India had done at Commonwealth games, let us remind you of the time when India hosted this quadrennial event back in 2010. Yes! It’s the Delhi Commonwealth Games when India was at the second position with its best ever score of 101 medals. Indian athletes like Saina Nehwal, Abhinav Bindra and many others had clinched 38 golds, 27 silvers and 36 bronze by playing the perfect host to 71 countries.

Another interesting fact about the Delhi Commonwealth Games 2010 is that just like is edition, Australia was at the no 1 spot and India, Canada and England were in the top 5. Hence, it will be interesting to see that with just two days left for Birmingham Commonwealth Games 2022 to end, how far will Indian athlete will take this year’s medal tally.