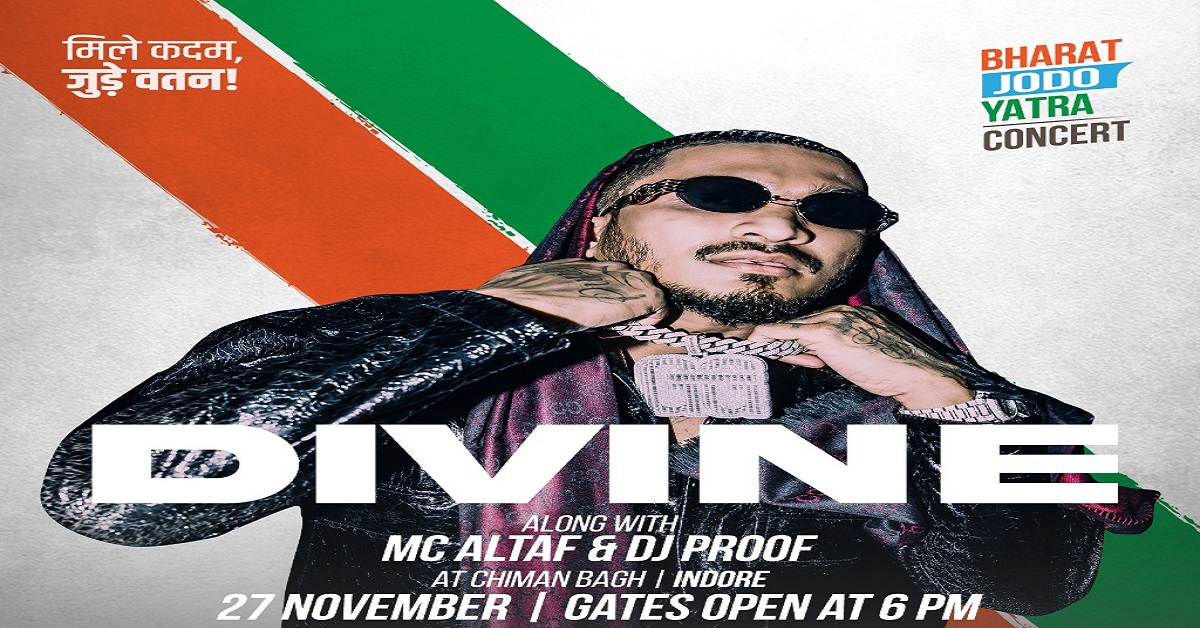 The Congress announced on social media on Saturday that Gully Boy fame rapper Divine alias Vivian Fernandes will stage a show on Sunday, November 27, during the Bharat Jodo Yatra in Indore.

He introduced Gully rap to the world, and now he’s joined our efforts to enhance the message of love and unity, reads the Congress’ official Twitter account, which tweeted a poster of the concert.

Watch Divine, a hip-hop artist from India, perform live on November 27 in Indore alongside MC altaf and DJ Proof. Be bold and stand up for the truth for Bharat Jodo Yatra.

Gully Gang, Divine’s own company, also announced that the singer will appear at the Bharat Jodo Concert in Indore.

DJ Proof and MC Altaf, two well-known hip-hop artists, will also give their performance. Registration for the performance may be done on Bookmyshow and Insider.com; it will be held at Chiman Bagh in Indore. The concert’s tickets are free. According to the poster, the concert’s gates will open at 6 PM and entrance will be on a “first come, first served basis.”

Rapper Divine hails from Mumbai, Maharashtra. After “Yeh Mera Bombay,” one of his songs, was released, he began to grow in fame (2013). With the 2019 release of “Mere Gully Mein,” a song he co-wrote with fellow Mumbai rapper Naezy, he made a name for himself.

Then, for his album “Punya Paap” (2020), which had topped Apple Music India’s charts, Divine became the first Indian rapper to be featured on the Spotify Times Square billboard in New York City on December 12, 2020. He made his Grammy début at the 64th Grammy Awards in 2022, becoming the first hip-hop artist from India to do so. He is well renowned for representing Mumbai’s street culture.

The Indian National Congress initiated the current nationwide movement known as the Bharat Jodo Yatra. Rahul Gandhi began the Yatra on September 7 from Kanyakumari and aims to travel through 12 Indian states in the course of roughly 150 days.

Bihar Police beats up youth in the middle of the road, video viral | Watch 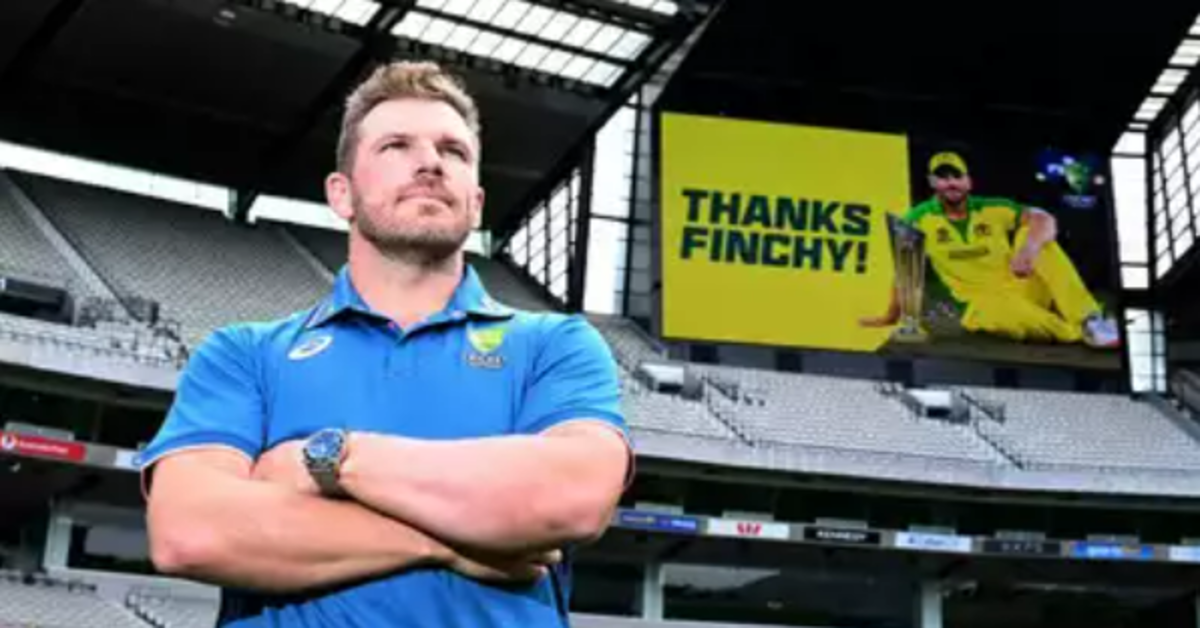 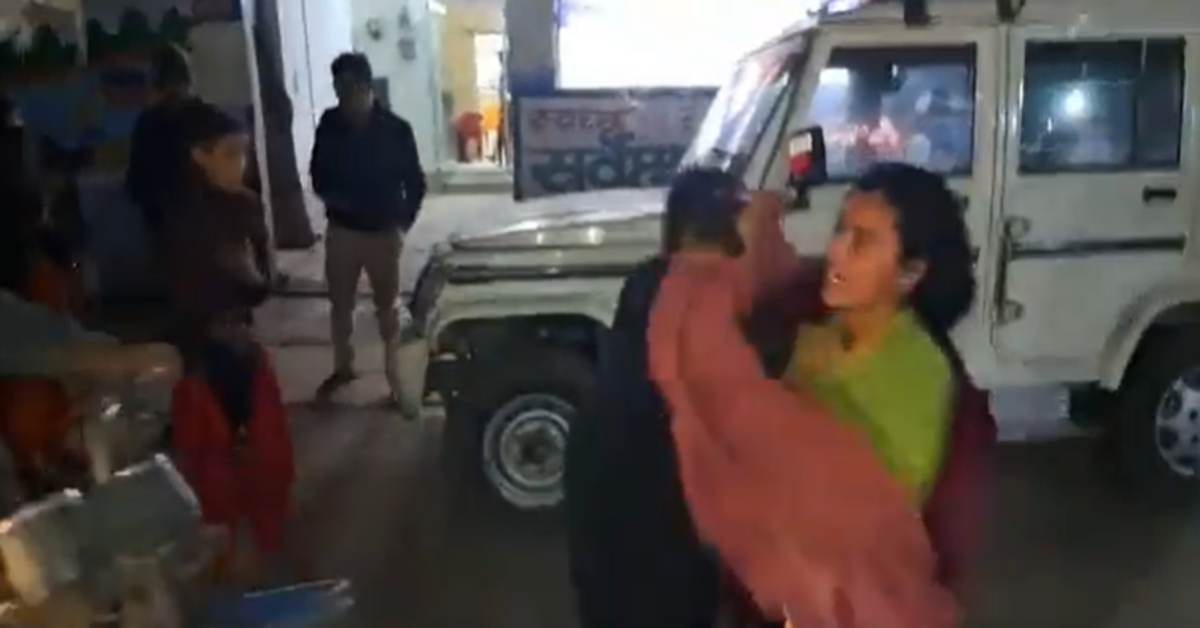 A bizarre story has come to light from Uttar Pradesh’s Meerut where the two wives of a man came face to face and ended up in a brawl on a busy road in Lisari, as per the reports. The two women can be fighting, dragging each other by their hair.

In the video, two women can be seen getting into a brawl with each other both of them hurl abuses at each other. The video shows both the women grabbing onto each other’s hair and kick each other.

The video also shows the woman in yellow giving life threats to the other woman as commotion continues. Subsequently after a bit, other people were also seen rushing in to stop the matter from escalating further as they separate the two women from each other.

After the video went viral, many users came forward and added their take on the incident as one user wrote and said that this is and facetiously wrote that if it indeed is a matter of a fight between two wives for a husband then the husband should be divided in half. The user then wrote things on a serious note as they asked for authorities intervention to reprimand the man for having two wives.

One user also facetiously wrote and asked as the two women can be seen fighting each other over the husband , the husband himself is nowhere to be found, implying that the husband should have been reprimanded instead of the two women getting into a tussle.

Another incident came to light from Uttar Pradesh’s Hapur where a group of men can be seen brutally beating up an elderly man for crashing into their car. The video of the incident was recorded by a bystander who saw the horrific incident unfold.

Man dragged by car for 12 KM on Yamuna Expressway