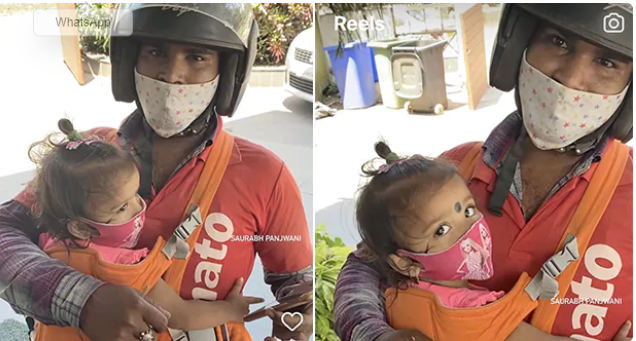 A video is doing rounds on social media platforms where a Zomato delivery partner gets a lot of appreciation for his loyalty to the job. The viral video also melts the heart of internet users after seeing the delivery guy carrying his minor kids while dispatching food orders.

The video has been shared by an Instagram user, where he was seen with a baby wrapped in his arms. While another toddler was seen jumping and playing around him. The person who ordered the food recorded the whole scenario on the phone. He also was seen being asked by the other persion that if these kids belongs to him. The delivery agent replies saying both the kids are his. He further informed me that he has to take both of his kids to work as they are too small to be left at home.

Ever since the video has uploaded on the internet, it has gained millions of vews, thousands of likes in no times. When clip went viral on the internet, many were bombarded also into the comment section of the video and filled it with a lot of positive messages.

One of the internet users wrote that proud of the man who is working so hard to raise his kids. Another user prayed for him and wrote that soon he will achieve whatever he is working hard for. While another user criticized the company for taking so much work from people and not providing enough paychecks in return. The fourth user wrote that he has a special respect for these kinds of people who are working tirelessly all day long without cribbing about, may god bless such people, the user added.

Viral: Flying parcels? See how Railways treat your parcels before they reach your doorstep | WATCH