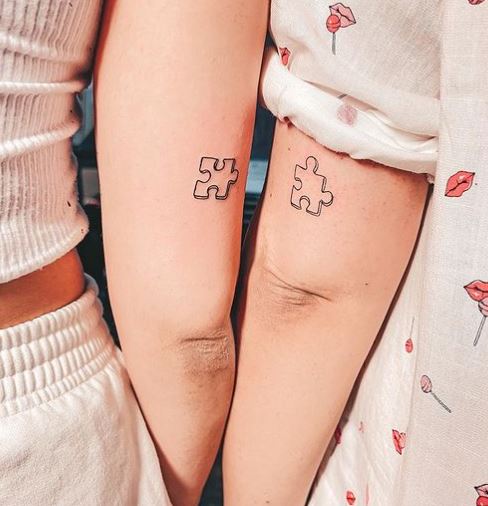 Anshula Kapoor, Boney Kapoor’s daughter with his first wife Mona Shourie Kapoor, has shared a solid testimony of her unbreakable bond with her stepsister Khushi Kapoor.

Anshula recently got inked with a permanent mark of design of a puzzle piece. Interestingly, the tattoo fits perfectly with the puzzle piece on Khushi’s arm.

Earlier, Anshula’s brother and actor Arjun Kapoor had got inked and shared it through an Instagram video. His body art has the letter “A” and a “spades” symbol, which he dedicated to Anshula. He captioned the post as, “She is the ace up my sleeve, Anshula Kapoor and I, intertwined forever in life and also by the letter A.”

After the demise of Bollywood actor Sridevi, Boney Kapoor’s children- Arjun, Anshula, Janhvi and Khushi Kapoor- have gotten along very well. Day by day their bond has been growing stronger which is definitely loved by their fans.

Recently, Arjun had shared how he is still getting used to being called ‘bhaiya’ by Janhvi and Khushi. He had said that it sounds very strange. Anshula calls him ‘bhai’ in a very different manner, and now this ‘Arjun bhaiya’ is a very new thing. So, when Janhvi says that it sounds very new to me, he had said.

Meanwhile, on the work front, Arjun Kapoor recently commenced shooting for Ek Villain 2. The actor is also awaiting the release of Bhoot Police on Disney Plus Hotstar. On the other hand, Janhvi Kapoor is geared up for the release of Good Luck Jerry.