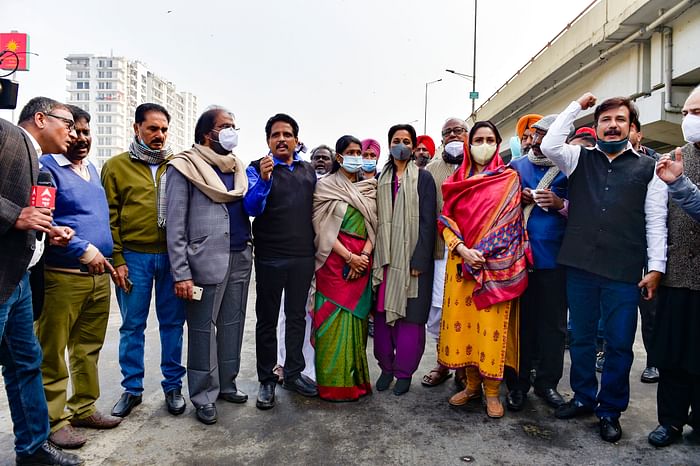 As many as 15 opposition leaders representing 10 political parties visited Delhi-Uttar border Ghazipur border on Thursday to meet the farmers protesting against the Centre’s three newly-enacted farm laws. Shiromani Akali Dal (SAD) leader Harsimrat Kaur Badal was one of the leaders who visited the protest site. The leaders said they were stopped by the Delhi police.

Apart from Badal, the 15 MPs included Supriya Sule of the Nationalist Congress Party (NCP), Kanimozhi of the DMK, and Saugata Roy of the Trinamool Congress, among others.

The SAD leader Badal tweeted that the 15 MPs visited the Ghazipur border to express solidarity with farmers. She said the opposition leaders saw the first hand the conditions created at Ghazipur border. She said she was shocked to see the treatment being meted out to the annadaata. Farmers are barricaded behind fortress like concrete barriers and barbed wire fencing. Even ambulances and fire brigades cannot enter the protest site, she added.

The police have set up rows of barricades, barbed wire fences and spikes on the roads to puncture tyres of the tractors and prevent the protesting farmers to enter the national capital after the violent clashes erupted between the protesters and Delhi police on Republic day last week. Several borders continued to remain closed for traffic movement this morning as well.

During a discussion in parliament’s upper house yesterday, several opposition parties asked the government to withdraw the three contentious farm laws adding that strict actions should be taken against the culprits behind the January 26 violence in Delhi.