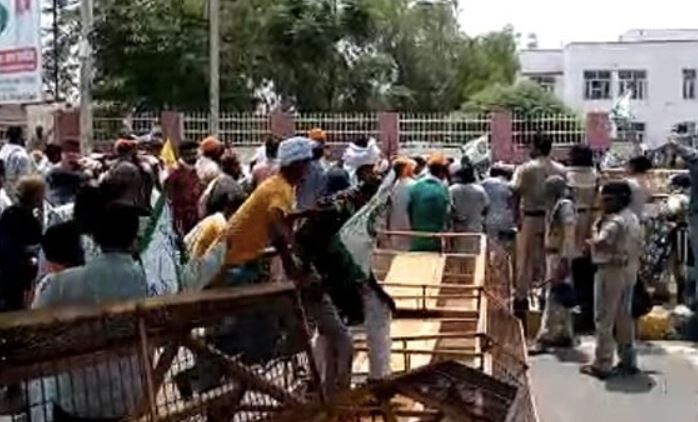 Despite the massive deployment of paramilitary troops in Haryana’s Sirsa, the farmers protesting against a sedition case, clashed with the police and knocked down the barricades on Saturday, and continued the demonstrations.

The Haryana police had deployed a huge force after farmer unions called for a protest against the arrests of five farmers in an alleged attack on the car of the Haryana Deputy speaker during a protest against the new agricultural laws. Hundreds of farmers have staged a blockade outside the district police chief’s office, demanding their release.

Since morning, Sirsa has been on high alert. A 20-member committee of farmers had met a group of officials to discuss their demands this afternoon.

Earlier, the police had earlier invoked sedition, attempt to murder charges against more than 100 farmers, most of them unidentified, at the violent protest against Deputy Speaker Ranbir Singh Gangwa in Sirsa on July 11. Later on Thursday, the police had arrested five farmers who are currently lodged in judicial custody.

This is the first time that any sedition case has been slapped against the farmers protesting against the contentious farm laws for the past nearly eight months. Among the farmer leaders, Harcharan Singh and Prahlad Singh were also named in the First Information Report.

Criticising the police action in the matter, the farmers have pointed out that even the Supreme Court recently called the sedition law a colonial one and questioned its need 75 years after the Independence.

Bharatiya Kisan Union leader Rakesh Tikait had tweeted that Haryana Police is booking farmers with charges of sedition at a time when the Supreme Court is commenting on striking down the law.

Meanwhile, Haryana Superintendent of Police Arpit Jain has said adequate deployments have been made to stop protestors and maintain law and order. Over 10,000 personnel from across all districts of Haryana, Rapid Action Force and paramilitary forces have been deployed along with 30 checkpoints so that nobody disrupts law and order and attempts to break the law, he has said.