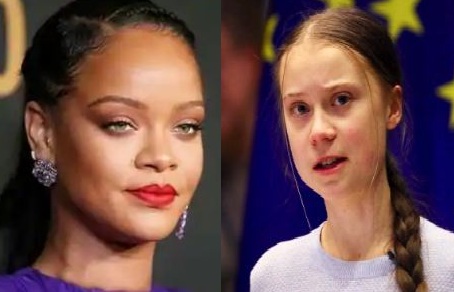 Rihanna shared a news article highlighting the Centre’s crackdown on the farmers by suspending internet services in many regions of India. Why aren’t we talking about this?, wrote the pop star adding the hashtag #FarmersProtest along with the post.

The singer’s tweet began trending on Twitter with thousands of responses from across the world. Among the responses, one came from actor Kangana Ranaut, who strongly expressed her disliking towards the ongoing farmers protest.

She tweeted that no one is talking about it because they are not farmers, they are terrorists who are trying to divide India, so that China can take over our vulnerable broken nation and make it a Chinese colony much like the USA.Sit down you fool, we are not selling our nation like you dummies, read Ranuat’s post.

Hours after Rihanna’s tweet, Greta Thunberg, a teenage climate activist also wrote on Twitter, extending the support to the ongoing agitation in India. We stand in solidarity with the #FarmersProtest in India, tweeted Thunberg while attaching a news story about internet shutdowns in Delhi.

Farmers feed the world, fight for them and protect them #FarmersProtest, wrote Ugandan Climate Activist Vanessa Nakate on Twitter and  expressed support to the protesting farmers of India.

The UK Member of Parliament Claudia Webbe also expressed solidarity with the Indian Farmers. Thanking Rihanna, she wrote on Twitter that in an era where political leadership is lacking, we are grateful for others stepping forward #FarmersProtest.

Author and niece of US Vice President Kamala Harris, Meena also showed her support towards the agitating farmers. She wrote, it’s no coincidence that the world’s oldest democracy was attacked not even a month ago, and as we speak the most populous democracy is under assault. We all should be outraged by India’s internet shutdowns and paramilitary violence against farmer protesters, added Meena Harris.

US Representative Jim Costa has called the ongoing agitation troubling. As a member pf the Foreign Affairs Committee, he said the situation is being closely monitored, the right to protest must always be respected.

Meanwhile, the internet services in areas of Singhu, Ghazipur and Tikri borders of the national capital, the epicentres of the farmers’ protest were suspended on Saturday. The shutdown was later extended twice till at least 5pm on Wednesday on the orders by the authorities.

Thousands of farmers have been camping at the Delhi’s border for over two months demanding the repeal of the Centre’s three agricultural laws. The agitation became violent when a group of protesters deviated from the assigned route on Republic during the tractor parade, storming the Red Fort.

Despite the rounds of talks, the Centre and the farmers have not been able to reach a consensus on the issue.While the government has offered to suspend the farm laws for a period of one and half years, farmer leaders have been adamant on their demand of complete withdrawal of the legislations.