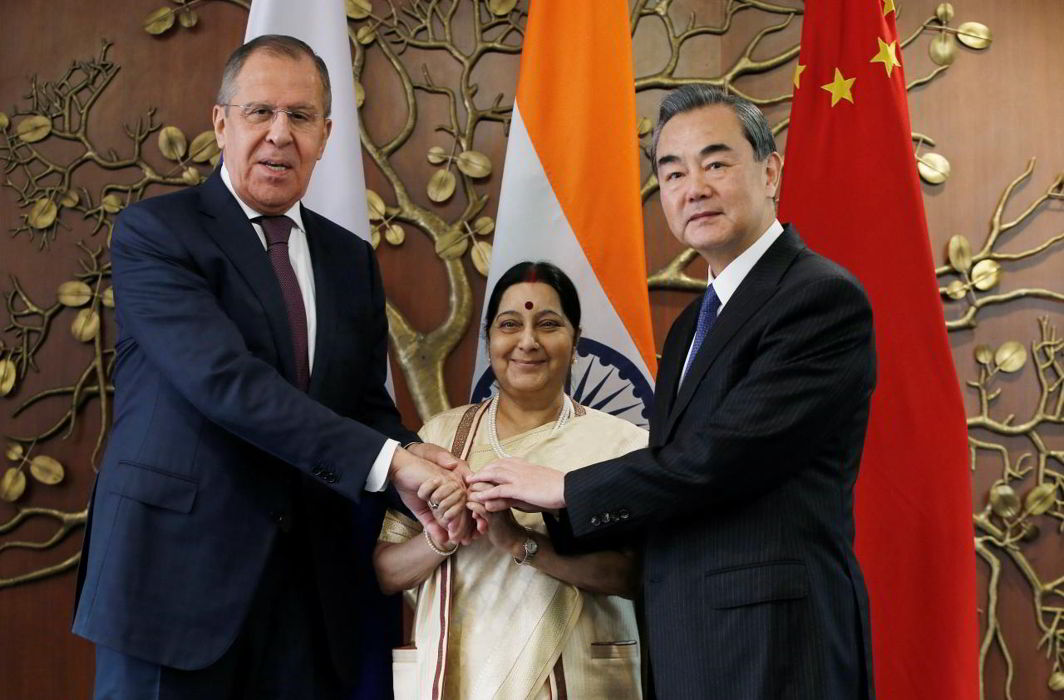 All three agree to strengthen bilateral and trilateral ties

The foreign ministers of India, China and Russia met in New Delhi on Monday and discussed several important issues of mutual interest spanning through security and economic architecture in Asia-Pacific region. The three countries have also decided to strengthen bilateral ties as well as expanding trilateral cooperation.

Sushma Swaraj, the Minister of External Afairs, while addressing a joint press conference with the visiting dignitaries said, “Our discussions today were focused on four broad cluster of areas, namely, economic and developmental issues; fight against terrorism; global/multilateral issues; and, regional issues.”

She said, “While discussing terrorism, I put across my view that significant rise in acts of terrorism by terrorist organizations like Taliban, Daesh (ISIS), Al-Qaeda, and LeT directly undermine international peace and security and endanger ongoing efforts to strengthen the global economy and ensure sustainable growth and development. India strongly recommends a comprehensive policy for dealing with global terrorism.”

Without naming Pakistan, she advised, “The policy should include dealing with extremism, countering religious fanaticism, preventing recruitment of terrorists, disrupting terrorist movements, stopping all sources for financing of terrorism, stopping flow of FTFs (Foreign Terrorist Fighters), dismantling terrorist infrastructure, and countering terrorist propaganda through the internet, but we should not limit ourselves to these only.”

The three foreign ministers shared the view that a capable and effective Afghan National Defence and Security Forces (ANDSF) should be the key to the stabilisation of Afghanistan.

The joint statement said issued at the end of the trilateral meeting said, “Noting the significant increase of opium poppy production in Afghanistan and the nexus between narcotics revenue and its financial support for terrorism, we emphasise the need for stepping up result-oriented international efforts aimed at countering the Afghan drug threat.”

Russian Foreign Minister Sergey Lavrov said the RIC format is about to become one of the key drivers of overall regional efforts to improve the architecture of interstate relations within the Asia-Pacific Region (APR). He advised that this should be based on the principle of inclusive, equal and indivisible security.

“Guided by this vision, our countries seek to step up dialogue with their regional partners, above all with ASEAN members,” Sergey said.

The joint statement further said, “We believe that various crises in the world should be resolved in accordance with the international law and the principles enshrined in the UN Charter, without resorting to force or external interference and through establishing broad national dialogue with due respect for political independence, territorial integrity and sovereignty of the countries,” it said.

Meanwhile, Russian foreign Minister Sergei Lavrov, while responding to a question at a lecture organised at Vivekananda International Foundation, a Delhi based think tank on Monday  said, that India has enough very smart diplomats and politicians to find an way which will allow it to benefit from (the Chinese) One Belt One Road (OBOR) process without sacrificing its position.

India has opposed the construction of China-Pakistan Economic Corridor (CPEC) as it proposes to pass through Pakistan occupied Kashmir (PoK).

According to Russian news agency TASS, Lavrov, while talking after the RIC meeting, Lavrov said that tensions on the Korean Peninsula can only be settled through political and diplomatic means in accordance with Russian-Chinese roadmap.

Recently the Chinese Foreign Minister Wang Yi, said in Beijing that the strategic interests of the two countries outweigh “partial friction” and handling of the Doklam standoff through diplomatic means reflects the importance of bilateral ties.

Wang’s New Delhi visit is the first by a top Chinese official to India after the 73-day long Doklam standoff and after the beginning of the second term of President Xi Jinping.