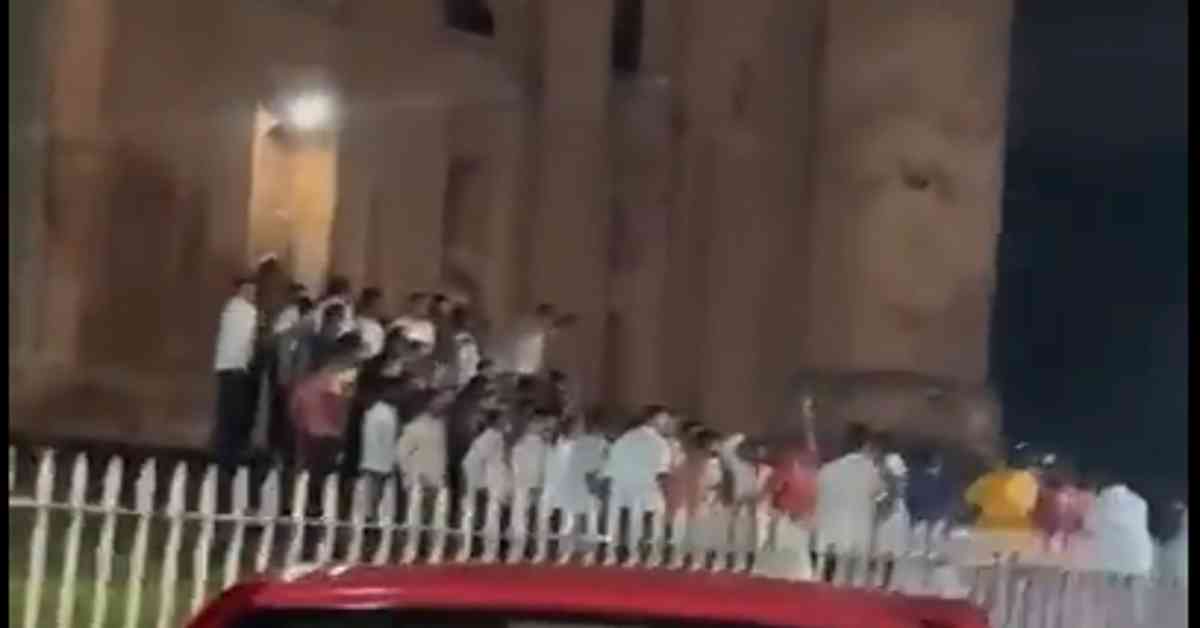 A mob forcefully entered a medieval mosque in Karnataka’s Bidar in the wee hours of Thursday morning and performed puja and chanted slogans like Jai Shree Ram, Jai Hindu Dharam, and Vande Mataram.

A video of the incident is surfacing on the internet wherein a mob could be seen taking puja procession on the occasion of Dussehra after they forcefully broke the lock. For the unversed, Mahmud Gewan Madarsa and Mosque is a heritage site under the Archeological Survey of India. The incident happened on October 6.

The police registered an FIR against 9 people and no arrest has been made so far, reports said.

Superintendent of Police Dekka Kishore Babu said there is a Minar inside the mosque complex and it is a regular practice from the Nizam period to perform Dussehra puja. The SP further said no one illegally broke the lock to enter the mosque complex, however, an FIR has been registered and the miscreants will be arrested soon.

All India Majlis-e-Ittehadul chief Asauddin Owaisi condemned the act and demanded Karnataka Chief Minister Basavaraj S Bommai to take stringent action against the miscreants and also claimed that BJP is promoting such activity only to demean Muslims.

Mahmud Gawan was built in the 1460s and has Indo-Islamic architecture under the Bahmani Sultanate. It was founded by the prime minister of the Bahamani empire in the late 15th century. In 2005, the Archaeological Survey of India took an initiative to preserve and protect the monument.

A man shot by the police in Kalaburagi in Karnataka after he was seen brandishing knives in a market and threatening to assault people in the area, reports said. 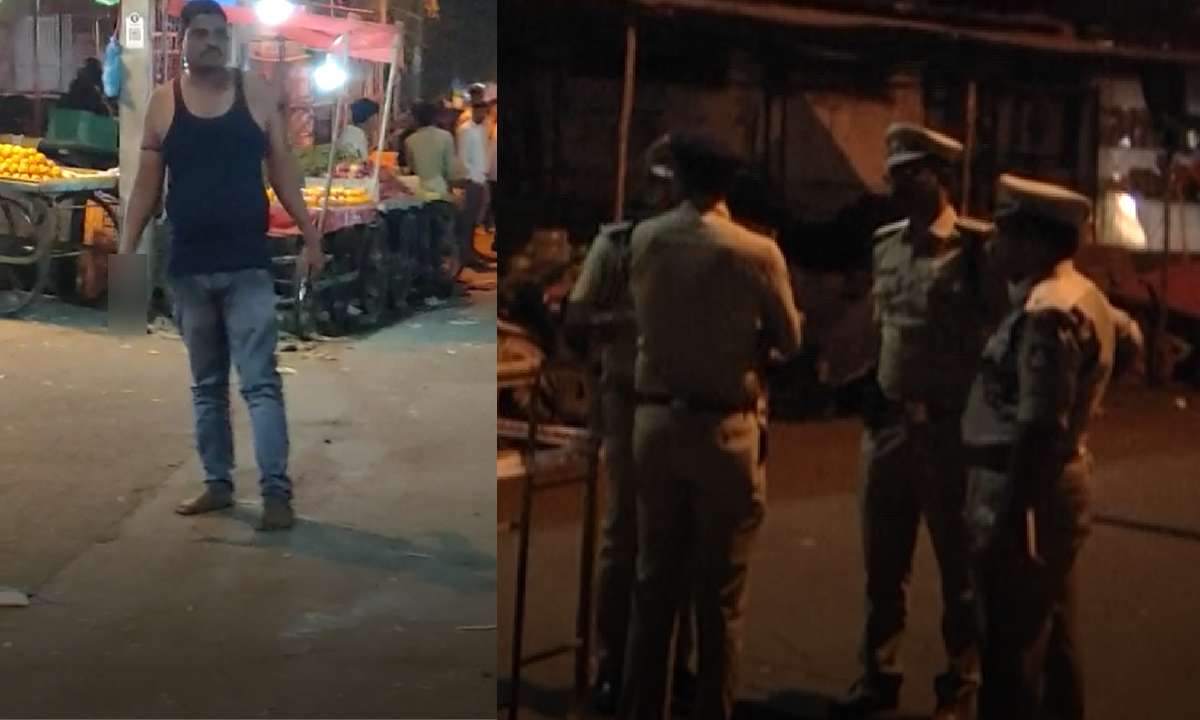 A man was shot by the police in Kalaburagi in Karnataka after he was seen brandishing knives in a market and threatening to assault people in the area, reports said.

As per the police, the incident happened on Sunday night, when the accused, identified as Fazal Bhagwan, was spotted threatening people with knives and other sharp-edged weapons in his hand. The police were alerted, arrived at the scene, and tried to restrain the man.

However, the accused tried to assault the police who shot at him in self-defence and to prevent him from causing harm to anyone in the public, police said, adding that the man sustained minor injuries in the incident and was admitted to a hospital and later arrested.

A video of the incident was caught on camera and is doing the rounds on the internet.

A senior official said the incident occurring during evening hours in Kalaburagi market, when the miscreant was trying to attack the public near the supermarket with a knife and sharp pieces of equipment.

He said that the accused tried to attack the police when they attempted to stop him from causing any possible harm and they (police), had to open fire in self-defence and for the sake of public safety, adding that more details about the accused are still being collected.

The official added that the assailant’s motive behind the act was not known yet.

Th accused has been arrested after being treated for his injuries and booked under relevant sections of the law. Further investigation is ongoing.

Bengaluru man guises as woman, exploits 13 women in return for job in IT sector, read how

After falling victim to the man’s exploitation, one victim approached the cybercrime cell and registered a complaint on January 26. 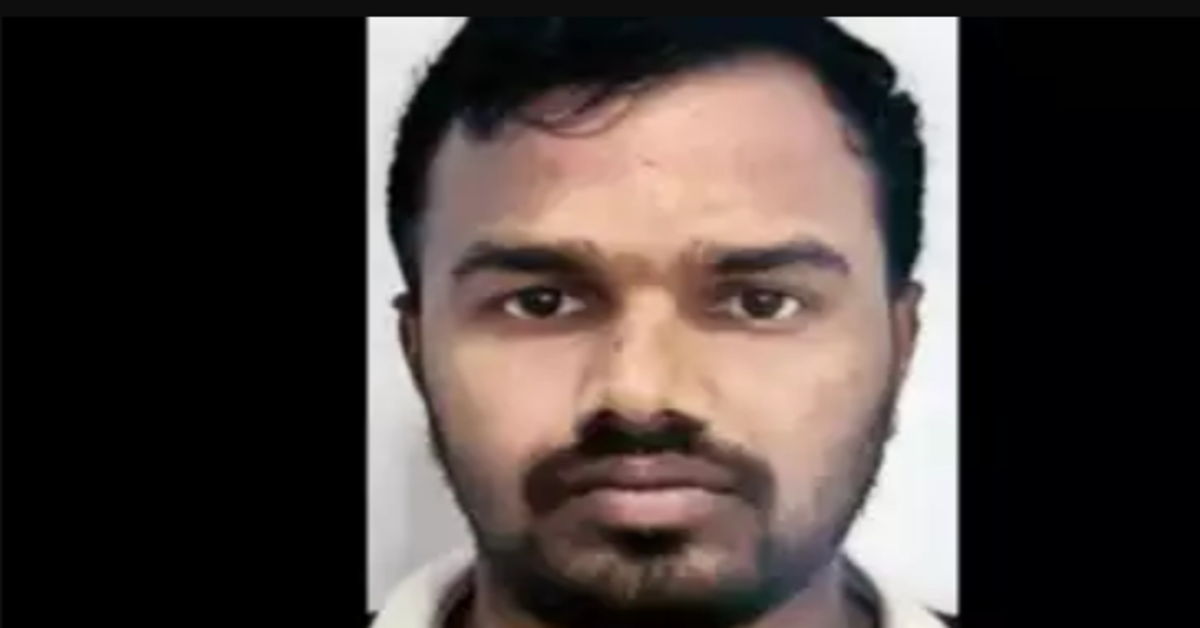 A harrowing story has come to light from Karnataka’s Bengaluru where a man, who used to pose as a woman or a manager and offer jobs in the IT sector to individuals in return for sexual favours. According to reports, the man had reeled in 13 women in his scam for an IT job.

It was reported that the man used the identities of Monika and Manager to offer jobs to individuals in the IT sector. The man used to befriend the women through popular picture-sharing phone applications after which he used to narrow down the list to women who were vulnerable, unemployed and were looking for jobs.

According to reports, the man used to gradually direct his victims to meet him on the pretext of offering advice and help with IT jobs. The culprit identified as Prasad with his experience in the IT sector used his knowledge to gain on the woman’s mind and then used to persuade them into having sex with him in hotel rooms.

The man, unabashed by his actions, even went further and even used to film the act between him and his victims only to later use it blackmail his victims.

The police, while talking to the media, said that the man used to make enough money for himself that he didn’t commit such acts out of compulsion to get money, however, the police suspect that used to do it for his own pleasure and has habitual behaviors.

After falling victim to the man’s exploitation, one victim approached the cybercrime cell and registered a complaint on January 26. After probing the case further, the police learnt that Prasad had started his sex for job scam during the covid lockdown.

However, police suspect that the man’s actions look habitual and could possibly trace back to the man’s college days. The man is reportedly native from Andhra and works in Bengaluru in the IT sector.

The DCP of South-East Bengaluru CK Baba has told the media the man has been arrested and charged under IPC section 376 and IT Act, 2000. The DCP has also praised the victim for coming forward and approaching the police to report the matter. 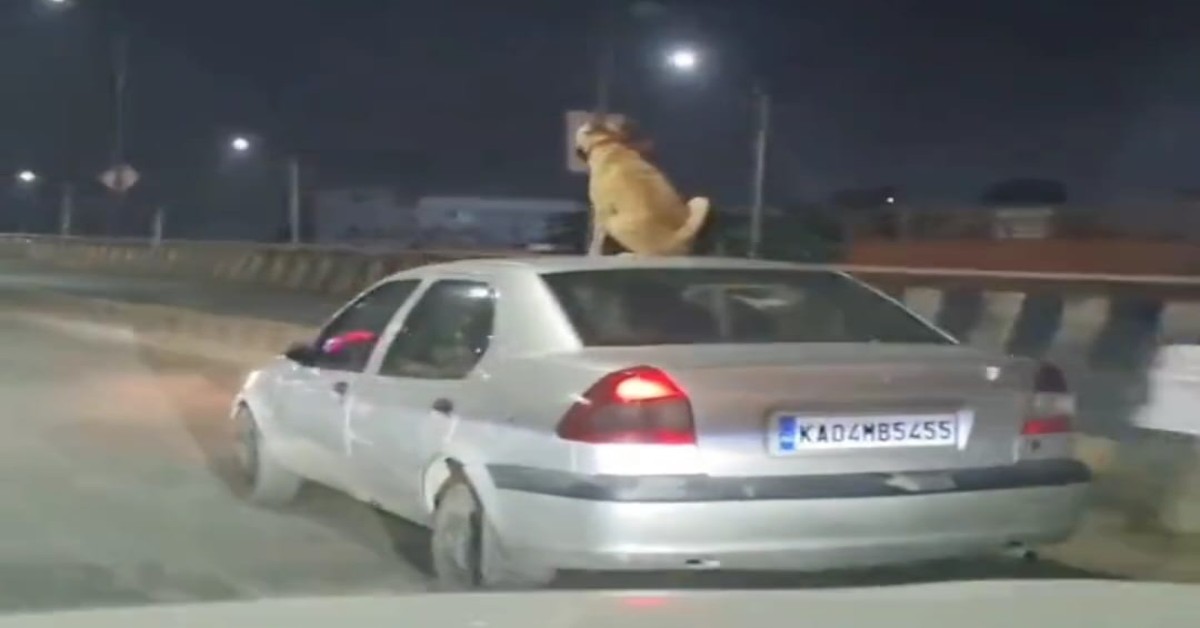 Several funny videos of dogs go viral on the social media platforms every other day, but have you ever seen a dog travelling on the top of a car. Most people’s answer would be no, however, a video is going viral on social media, in which a dog is sitting peacefully on top of a moving car on the road of Bangalore.

The video was shared on Twitter by a user named Forever Bengaluru on Thursday.

The caption of the post read “Just Bengaluru Things.” Also, the post has been viewed more than 159,2000 times so far. Apart from this, the video has been retweeted 1,030 times and shared 1,030 times. The viral video has enraged internet users and sparked a debate on road safety and animal abuse. Twitter users have criticized the driver of the car for putting the dog in danger. Along with this, they are also demanding action against the driver.

Appropriate action against driver should be taken