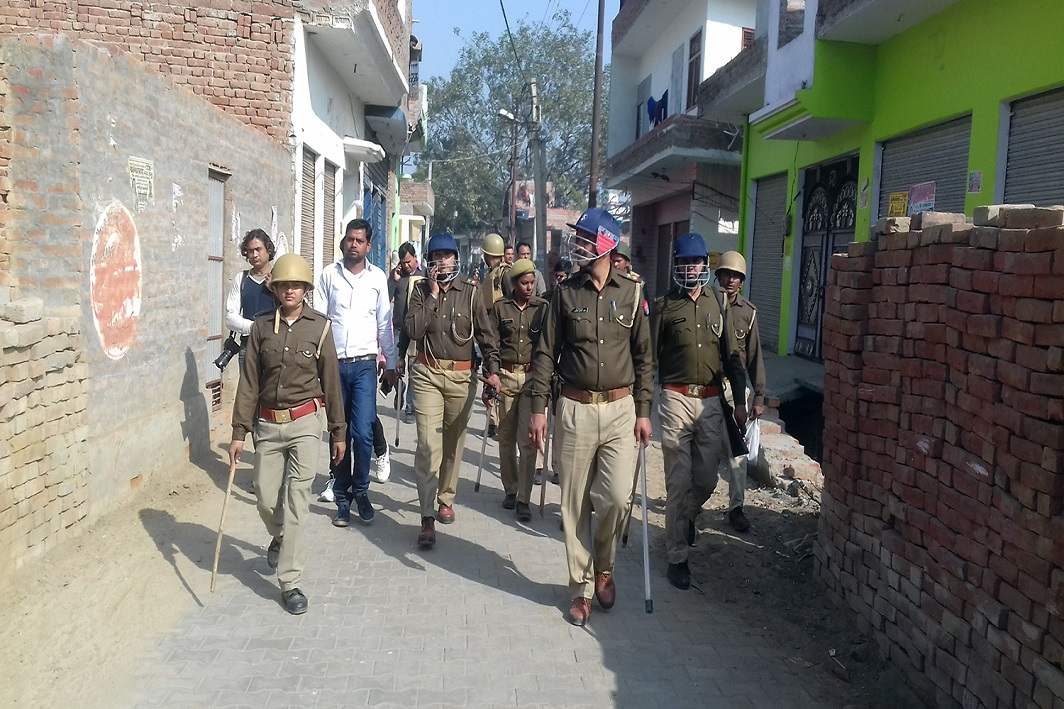 “Violence started after Muslims objected to the ‘Tiranga Yatra’ by ABVP and VHP activists”, goes the common refrain.

How about this: “Violence started after a bike rally by ABVP and VHP activists disrupted Republic Day celebrations”?

Both are partly true, and misleading. As often happens in instances of sectarian violence, there is much distortion of facts.

In the ‘controversies’ twisting facts about the riots in Kasganj, the latest is the Facebook post by Bareilly district magistrate Raghavendra Vikram Singh, saying it has become a trend to raise anti-Pakistan slogans in Muslim dominated areas.

Singh deleted the post after his post created a stir on social media, with some supporting him and others against him.

In another post on Facebook, Singh asked why slogans are never raised against ‘bigger enemy’ China. He said: “Cheen to bada dushman hai, Tiranga lekar Cheen murdabad kyon nahin? (China is a bigger enemy to us. Why isn’t the tricolour being waved and anti-China slogans shouted)?”

Talking to the Times of India, Singh said he was hurt and angry at what was happening “in the name of nationalism.”

“Such fringe groups are coming up in every part of the state, taking the same ugly route to instigate people of the minority community by forcefully entering their locality in the name of nationalism. These people don’t care about the fabric of our mixed culture and brotherhood,” he said.

He was right. Such slogans are meant to annoy Muslims by implying they are Pakistan supporters. As one senior journalist commented some time ago, “When ‘they’ say Pakistanis should be taught a lesson, they keep looking towards Muslims.” The implication is clear. It is bound to irritate and inflame passions.

Attempts to create tension where there was no reason to was evident even in instigating violence on Republic Day. Unfortunately, the dominant version is wrong in saying that it started when a ‘Tiranga Yatra’ taken out by RSS wings of ABVP and VHP was passing through a Muslim dominated locality and the people there objected to its passage.

This is patently false. Most news reports ignored or downplayed the fact that Muslims were celebrating the Republic Day and were hoisting the national flag in the not-so-wide lane when the ABVP-VHP group taking out the so-called ‘Tiranga Yatra’ on bikes came with saffron flags and demanded that they be allowed to pass.

Instead of letting the locals to go ahead with their Republic Day program and hoist the national flag, they demanded that the Muslims should  also hoist the saffron flag and join in shouting ‘Vande Mataram’. They also started shouting slogans against Pakistan.

The celebration was disrupted and the locals objected to this unwarranted interference with their program. The dispute soon deteriorated into violence. In the clash, some shots were fired. A Hindu boy and a Muslim sustained bullet injuries. The Hindu, Chandan Gupta, died later. The Muslim, Noushad, had been shot in the leg and he lived.

In the violence and arson that followed, Mohd Akram was also injured when a mob dragged him out of his Maruti car and tried to gouge out his eye when he was trying to reach a hospital with his pregnant wife. He lost an eye and somehow managed to take his wife to the hospitalwhere she delivered a baby girl.

Subsequent reports spoke only about the Hindu boy getting shot and not about any firing by the Hindus. To add to this, a rumour was spread about another Hindu young man, Rahul Upadhyay being killed in the riots.

The UP Police refuted this and later Rahul himself spoke out to deny the rumours. “One of my friends informed me of rumours on social media about me getting killed during Kasganj clashes. But I was not present in Kasganj at the time when the riots took place. I had gone to my village. I am absolutely fine,” Rahul said, according to a media report.

A day after the clashes happened on Republic Day, the local BJP MP and MLA had visited Kasganj and participated in the cremation of Chandan Gupta. The mob there demanded status of martyr for him with compensation to his family and, on its way back, indulged in further violence and arson.

Reacting to the violence, Union Minister Sadhvi Niranjan Jyoti took forward the same line of people objecting to ‘Tiranga Yatra’. “The incident means that anti-national elements cannot tolerate Tiranga Yatra. The UP government is taking strict actions. Such incidents will not be tolerated and it should also not be politicised,” she said, according to News 18.

Governor Ram Naik had called the Kasganj violence a “blot” for the state ruled by Chief Minister Yogi Adityanath. The situation in Kasganj was reportedly tense but a heavy deployment of police personnel combined with a crackdown on hooligans in the district has ensured peace, reported NDTV.[/vc_column_text][/vc_column][/vc_row]