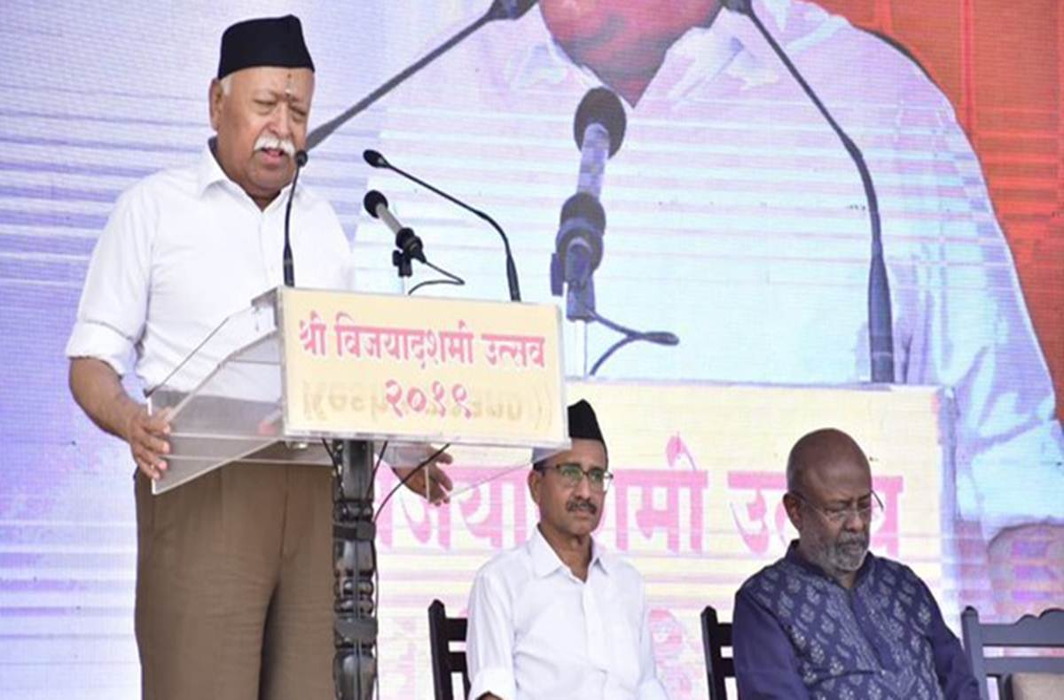 [vc_row][vc_column][vc_column_text]Rashtriya Swayamsevak Sangh (RSS) sarsanghchalak Mohan Bhagwat in his Dussehra speech today – Tuesday, Oct 8 – at Vijayadashmi function of the outfit in Maharashtra’s Nagpur, said lynching is “alien to Bharat” and by using such words, “efforts are underway to defame our country and the entire Hindu society and create fear among the so-called minority communities.”

The RSS chief also said that the Sangh (RSS) is firm on its vision that “Bharat is a Hindu Rashtra.”

“Those who belong to Bharat, those who are descendants of Bharatiya ancestors, those who are working for the ultimate glory of nation and joining hands in enhancing peace, respecting and welcoming all diversities; all those Bharatiyas are Hindus,” he said.

The RSS chief also lauded Prime Minister Narendra Modi and Union Home Minister Amit Shah over the government’s move to abrogate Article 370 in Jammu and Kashmir, but said some vested interests do not want the country to be strong and vibrant.

He said in the past few years, there has been transformation in “direction of thought process of Bharat.”

“There are many people in the world and in Bharat as well, who don’t want this. A developed Bharat creates fear in the minds of vested interests…such forces will also not want Bharat to be strong and vibrant,” the RSS chief said.

Even well-meaning policies, statements from persons in government and administration were being misused to benefit nefarious designs by vested interests, he rued.

“We must be alert in identifying these plots and counter them on intellectual and social levels,” he said.

Voicing his displeasure over several incidents of mob violence in the country, he said, “Nowadays, there have been reports that members of a community in our society have been attacked by another community, making them victims of social violence. Such incidents have not been one-sided. There are reports of incidents happening from both sides and allegations and counter-allegations. It has also come to light that some incidents have been deliberately fabricated while some others have been published in a distorted manner.”

“However,” he added, “it must be accepted that these tendencies of violence have somehow or the other crossed the limits of the law and order and wreaked havoc by eroding the mutual relations in the society.”

He went on to dissociate the Sangh from this and called it un-India. “Neither this tendency is the tradition of our country nor does it fit in the spirit of the Constitution. Howsoever deep the difference of opinion be, howsoever provocative actions might have taken place, still, we should act by remaining within the limits of Constitution, handing over such cases to the police and reposing faith in the judicial system of the country. This is the duty of the citizens of a free nation. The Sangh has never supported the people who were involved in such incidents and it stands against each and every such incident. Swayamsevaks are working in this direction so that such incidents do not take place,” said Bhagwat.

“Lynching is not the word from Indian ethos, its origin is from a story in a separate religious text. We Indians trust in brotherhood. Don’t impose such terms on Indians.”

“Lynching is a western construct and one shouldn’t use it in the Indian context to defame the country,” he said.

Bhagwat urged citizens to create harmony, and that everyone should live within confines of law. “Swayamsevaks are brought up with that sanskar,” he said.

Bhagwat said the world was eager to know if the 2019 elections in such a huge country will be conducted smoothly. “Democracy in India is not something imported from any country, but a practice which has been prevalent here since centuries,” Bhagwat said.

He said India’s borders were now safer than ever, and more focus was needed on coastal security.

“The number of guards and check-posts on land borders and surveillance along the maritime border, especially on islands, have to be increased,” he said.

On concerns over the economic sector, he said the slowing down of world economy has left its impact everywhere.

“The government has taken initiatives to tide over the situation in the last one-and-a-half months. Our society is entrepreneurial and will overcome these challenges,” he added.

HCL founder Shiv Nadar was the chief guest for this year’s event.

Inflation below 4 per cent, Centre hikes dearness allowance to 17 per cent, up by 5 per cent