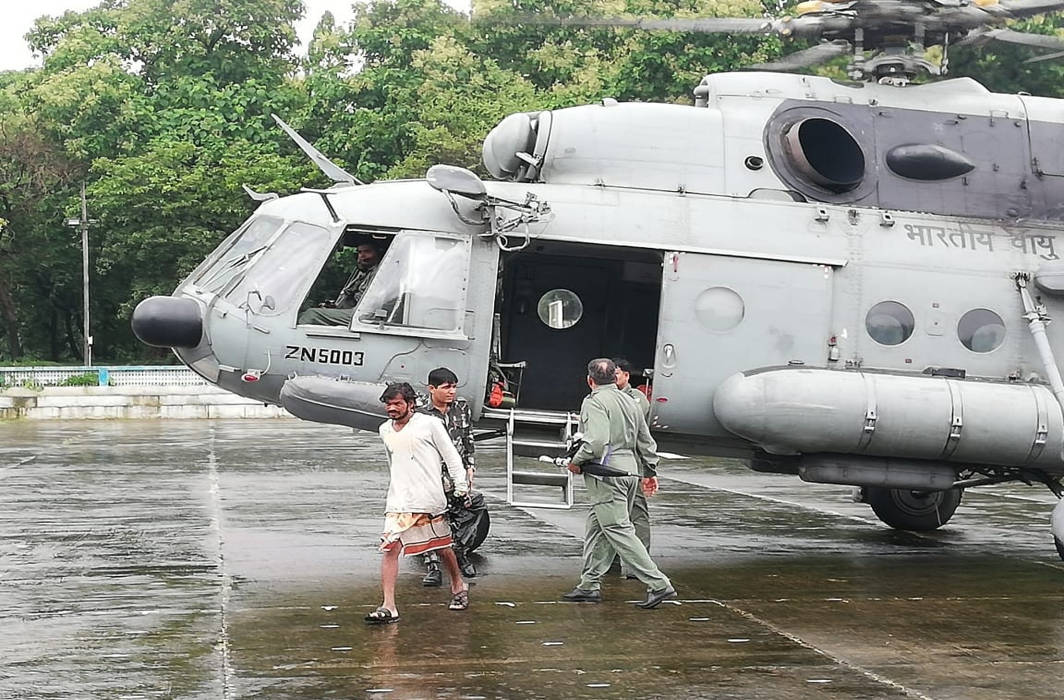 In Gujarat, around 45 people were air-lifted in two Indian Air Force (IAF) choppers and close to 9,000 shifted to safer locations from flood-ravaged districts of Navsari and Surat on Sunday.

The Navsari district administration had to seek the help of IAF to rescue 45 villagers who were stranded in five-foot-deep waters in Mendhar Village of Gandevi Taluka due to incessant rainfall.

Dr M D Modiya, Navsari collector, said these villagers had returned to their homes ignoring the advice of the administration and got trapped in the gushing waters of Ambika river. They were given shelter in Surat.

The National Disaster Response Force (NDRF) also rescued 140 people of 40 families who were trapped in Kuwarda viallge on the banks of overflowing Kim river in Mangrol Taluka.

In Bharuch, another tragedy struck a farm labourer couple whose three young daughters got buried when the wall of the house adjoining theirs crashed on them in Nandeda viallge.

All schools and colleges of the various flood affected districts will remain closed on Monday.

Train Movements and connectivity to large number of interior villages have been cut off with all interior roads heavily inundated, said Surat collector Dhavan Patel.

In Maharashtra too, situation has not improved. At least six persons were killed in Mumbai and Satara as rain continued to clobber the coastal Konkan region. Five persons drowned in three separate incidents at Navi Mumbai, Palghar and Thane since Friday. While five bodies have been recovered, another person feared dead in Navi Mumbai is yet to be traced.

Moreover, several passengers were stranded at Mumbai’s Lokmanya Tilak Terminus on Sunday night after trains were cancelled, shortly-terminated, diverted or rescheduled due to heavy rain.

At least 18 trains have been cancelled on Monday morning.

Schools and colleges will remain close on Monday in Mumbai and its suburbs, Thane, Palghar and Raigad district, Chief Minister Devendra Fadnavis said. He also asked the people to stay indoors and avoid coming out of their homes.

The India Meteorological Department (IMD) has predicted that Maharashtra will continue to be under the grip of a vigorous monsoon till the middle of this week with “heavy to extremely heavy” showers over Pune, parts of Konkan and Vidarbha till August 8.[/vc_column_text][/vc_column][/vc_row]