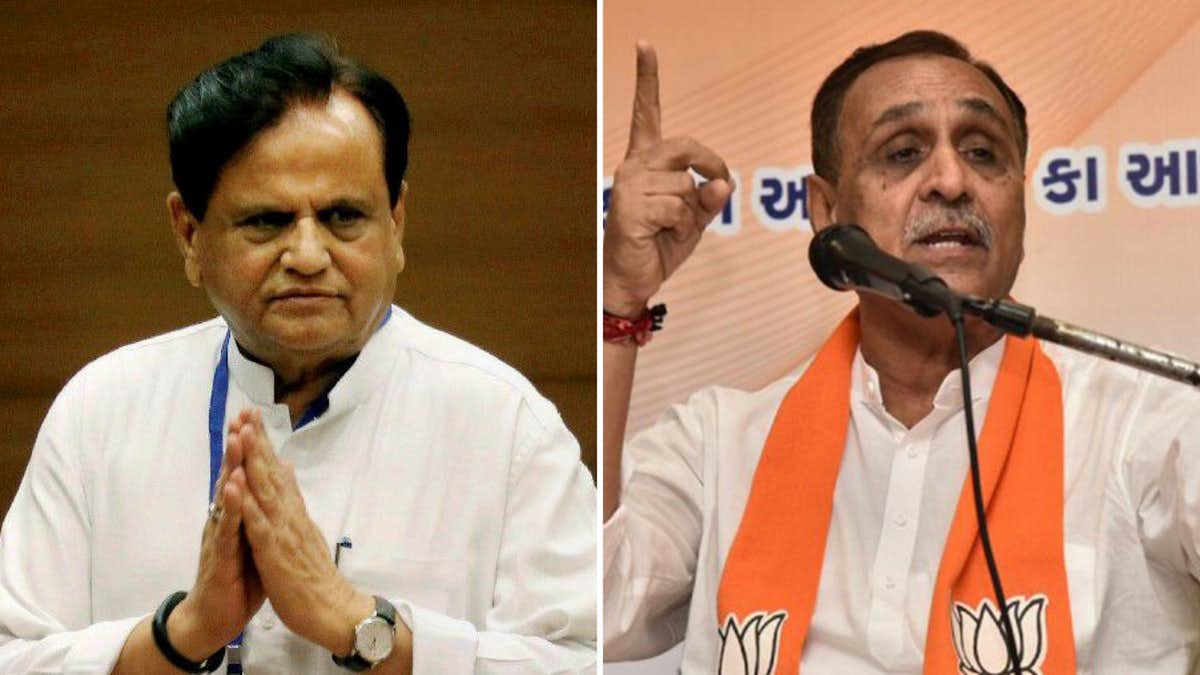 [vc_row][vc_column][vc_column_text]Vijay Rupani alleged that two arrested ISIS suspects worked at a hospital where Patel, political secretary to Congress chief Sonia Gandhi was once a trustee

As the heat for Gujarat Assembly polls intensifies, the two key political forces vying for power – BJP and the Congress – have begun to play an ‘allegation ping-pong’. And with the stakes as high as they could be, considering that the state is no longer being viewed as an impregnable BJP fortress, the manner of allegations too are more specific and not purely political rhetoric in line with the infamous ‘Maut ka Saudagar’ jibe.

Rupani sought Patel’s resignation from the Rajya Sabha over what he termed as the latter’s alleged links with two men arrested earlier this week by the state’s anti-terrorist squad (ATS) for being suspected Islamic State (ISI) operatives. The Gujarat chief minister also demanded an explanation from Rahul Gandhi, the Congress key campaigner for Gujarat, and Patel over the allegations terming the case as one that involved a “matter of national security”.

Two suspected IS operatives were arrested by the Gujarat ATS two days ago. According to an FIR, one of the accused, Mohammed Kasim Stimberwala, earlier worked as a echo technician at Sardar Patel Hospital in Ankleshwar town of Bharuch in Gujarat, the home district of Ahmed Patel.

Ahmed Patel had been associated with the foundation of the hospital where on October 23, 2016, the then President Pranab Mukherjee had inaugurated the renovated Sardar Patel Hospital and Heart Institute. In 1986, when Ahmed Patel was the Gujarat Pradesh Congress Committee chief he had reportedly helped raise funds for the hospital and had served as one of the trustees of the hospital for some time.

According to Rupani’s allegation, Patel was guilty of links with the arrested IS suspects as he was associated with the hospital where Timberwala was employed till October 24, when he was relieved of his duties. Timberwala had reportedly submitted his resignation from the job to the hospital management on October 4 on the grounds that he was moving to Jamaica where he had secured a job at a hospital to work as an echo technician. Stimberwala was arrested by the Gujarat ATS on October 25 – a day after being relieved from his job at the hospital – from Ankleshwar railway station in Bharuch district.

According to Rupani, the charges leveled by the ATS against the two arrested IS suspects –lawyer Ubaid Mirza (29) and Kasim Steamerwala (31) – the duo had planned to attack a Hindu Godman, Hindu shrines and a synagogue. “They were well-prepared with passports and visas to flee abroad,” Rupani claimed.

“This is a serious issue, as a terrorist was arrested from a hospital which is being run by Patel… It has been revealed that though Patel had resigned as a trustee of that hospital in 2014, he is still at the helm of the hospital’s affairs,” the Gujarat CM alleged. Rupani wondered “what would have happened if these two terrorists were not arrested… Patel, Rahul Gandhi and the Congress must come clean on the issue. We also want Patel to resign as Rajya Sabha MP.”

Jayesh N Patel, a trustee of the hospital has denied that “Ahmed Patel or any of his family members are connected with the hospital and the trust in any away’’. In a statement issued on Friday evening, shortly after Rupani making the allegations, the hospital trustee said that “some elements are levelling baseless allegations against the hospital”.

In a series of tweets, Ahmed Patel too denied the allegations made by Vijay Rupani, terming them “completely baseless”.[/vc_column_text][vc_raw_html]JTNDYmxvY2txdW90ZSUyMGNsYXNzJTNEJTIydHdpdHRlci10d2VldCUyMiUyMGRhdGEtbGFuZyUzRCUyMmVuJTIyJTNFJTNDcCUyMGxhbmclM0QlMjJlbiUyMiUyMGRpciUzRCUyMmx0ciUyMiUzRU15JTIwcGFydHklMjBhbmQlMjBJJTIwYXBwcmVjaWF0ZSUyMHRoZSUyMEFUUyVFMiU4MCU5OXMlMjBlZmZvcnQlMjB0byUyMG5hYiUyMHRoZSUyMHR3byUyMHRlcnJvcmlzdHMuJTIwSSUyMGRlbWFuZCUyMHN0cmljdCUyMGFuZCUyMHNwZWVkeSUyMGFjdGlvbiUyMGFnYWluc3QlMjB0aGVtLiUyMCUyODElMkYzJTI5JTNDJTJGcCUzRSUyNm1kYXNoJTNCJTIwQWhtZWQlMjBQYXRlbCUyMCUyOCU0MGFobWVkcGF0ZWwlMjklMjAlM0NhJTIwaHJlZiUzRCUyMmh0dHBzJTNBJTJGJTJGdHdpdHRlci5jb20lMkZhaG1lZHBhdGVsJTJGc3RhdHVzJTJGOTIzOTUzODc1NDk2NzkyMDY1JTNGcmVmX3NyYyUzRHR3c3JjJTI1NUV0ZnclMjIlM0VPY3RvYmVyJTIwMjclMkMlMjAyMDE3JTNDJTJGYSUzRSUzQyUyRmJsb2NrcXVvdGUlM0UlMEElM0NzY3JpcHQlMjBhc3luYyUyMHNyYyUzRCUyMmh0dHBzJTNBJTJGJTJGcGxhdGZvcm0udHdpdHRlci5jb20lMkZ3aWRnZXRzLmpzJTIyJTIwY2hhcnNldCUzRCUyMnV0Zi04JTIyJTNFJTNDJTJGc2NyaXB0JTNF[/vc_raw_html][vc_raw_html]JTNDYmxvY2txdW90ZSUyMGNsYXNzJTNEJTIydHdpdHRlci10d2VldCUyMiUyMGRhdGEtbGFuZyUzRCUyMmVuJTIyJTNFJTNDcCUyMGxhbmclM0QlMjJlbiUyMiUyMGRpciUzRCUyMmx0ciUyMiUzRVRoZSUyMGFsbGVnYXRpb25zJTIwcHV0JTIwZm9yd2FyZCUyMGJ5JTIwQkpQJTIwYXJlJTIwY29tcGxldGVseSUyMGJhc2VsZXNzLiUyMCUyODIlMkYzJTI5JTNDJTJGcCUzRSUyNm1kYXNoJTNCJTIwQWhtZWQlMjBQYXRlbCUyMCUyOCU0MGFobWVkcGF0ZWwlMjklMjAlM0NhJTIwaHJlZiUzRCUyMmh0dHBzJTNBJTJGJTJGdHdpdHRlci5jb20lMkZhaG1lZHBhdGVsJTJGc3RhdHVzJTJGOTIzOTU0MDE0MzY2MDAzMjAwJTNGcmVmX3NyYyUzRHR3c3JjJTI1NUV0ZnclMjIlM0VPY3RvYmVyJTIwMjclMkMlMjAyMDE3JTNDJTJGYSUzRSUzQyUyRmJsb2NrcXVvdGUlM0UlMEElM0NzY3JpcHQlMjBhc3luYyUyMHNyYyUzRCUyMmh0dHBzJTNBJTJGJTJGcGxhdGZvcm0udHdpdHRlci5jb20lMkZ3aWRnZXRzLmpzJTIyJTIwY2hhcnNldCUzRCUyMnV0Zi04JTIyJTNFJTNDJTJGc2NyaXB0JTNF[/vc_raw_html][vc_raw_html]JTNDYmxvY2txdW90ZSUyMGNsYXNzJTNEJTIydHdpdHRlci10d2VldCUyMiUyMGRhdGEtbGFuZyUzRCUyMmVuJTIyJTNFJTNDcCUyMGxhbmclM0QlMjJlbiUyMiUyMGRpciUzRCUyMmx0ciUyMiUzRVdlJTIwcmVxdWVzdCUyMHRoYXQlMjBtYXR0ZXJzJTIwb2YlMjBuYXRpb25hbCUyMHNlY3VyaXR5JTIwbm90JTIwYmUlMjBwb2xpdGljaXNlZCUyMGtlZXBpbmclMjBlbGVjdGlvbnMlMjBpbiUyMG1pbmQlMjAlMjgzJTJGMyUyOSUzQyUyRnAlM0UlMjZtZGFzaCUzQiUyMEFobWVkJTIwUGF0ZWwlMjAlMjglNDBhaG1lZHBhdGVsJTI5JTIwJTNDYSUyMGhyZWYlM0QlMjJodHRwcyUzQSUyRiUyRnR3aXR0ZXIuY29tJTJGYWhtZWRwYXRlbCUyRnN0YXR1cyUyRjkyMzk1NDUzNzQ0MTkxMDc4NCUzRnJlZl9zcmMlM0R0d3NyYyUyNTVFdGZ3JTIyJTNFT2N0b2JlciUyMDI3JTJDJTIwMjAxNyUzQyUyRmElM0UlM0MlMkZibG9ja3F1b3RlJTNFJTBBJTNDc2NyaXB0JTIwYXN5bmMlMjBzcmMlM0QlMjJodHRwcyUzQSUyRiUyRnBsYXRmb3JtLnR3aXR0ZXIuY29tJTJGd2lkZ2V0cy5qcyUyMiUyMGNoYXJzZXQlM0QlMjJ1dGYtOCUyMiUzRSUzQyUyRnNjcmlwdCUzRQ==[/vc_raw_html][vc_raw_html]JTNDYmxvY2txdW90ZSUyMGNsYXNzJTNEJTIydHdpdHRlci10d2VldCUyMiUyMGRhdGEtbGFuZyUzRCUyMmVuJTIyJTNFJTNDcCUyMGxhbmclM0QlMjJlbiUyMiUyMGRpciUzRCUyMmx0ciUyMiUzRUxldCVFMiU4MCU5OXMlMjBub3QlMjBkaXZpZGUlMjBwZWFjZSUyMGxvdmluZyUyMEd1amFyYXRpcyUyMHdoaWxlJTIwZmlnaHRpbmclMjB0ZXJyb3Jpc20lM0MlMkZwJTNFJTI2bWRhc2glM0IlMjBBaG1lZCUyMFBhdGVsJTIwJTI4JTQwYWhtZWRwYXRlbCUyOSUyMCUzQ2ElMjBocmVmJTNEJTIyaHR0cHMlM0ElMkYlMkZ0d2l0dGVyLmNvbSUyRmFobWVkcGF0ZWwlMkZzdGF0dXMlMkY5MjM5NTQ2OTM4OTM1ODI4NDglM0ZyZWZfc3JjJTNEdHdzcmMlMjU1RXRmdyUyMiUzRU9jdG9iZXIlMjAyNyUyQyUyMDIwMTclM0MlMkZhJTNFJTNDJTJGYmxvY2txdW90ZSUzRSUwQSUzQ3NjcmlwdCUyMGFzeW5jJTIwc3JjJTNEJTIyaHR0cHMlM0ElMkYlMkZwbGF0Zm9ybS50d2l0dGVyLmNvbSUyRndpZGdldHMuanMlMjIlMjBjaGFyc2V0JTNEJTIydXRmLTglMjIlM0UlM0MlMkZzY3JpcHQlM0U=[/vc_raw_html][vc_column_text]The Congress party’s in-charge of communications Randeep Singh Surjewala too rubbished the allegations made by Rupani, insisting that “a frustrated BJP facing imminent defeat in Gujarat is resorting to levelling reckless and baseless allegations against Ahmed Patel.”

Rupani’s charges against Ahmed Patel come at a time when the Congress is aggressively questioning the BJP to come clean on allegations that Jay Shah, son of the saffron party’s national president Amit Shah, had made windfall gains in his wealth ever since Narendra Modi steered his party to victory in the 2014 general elections. The Congress has turned the meteoric rise in Jay Shah’s wealth into an electoral issue in Gujarat – the home state of both Prime Minister Narendra Modi and BJP president Amit Shah – which goes to polls in two phases, first on December 9 and then on December 14.[/vc_column_text][/vc_column][/vc_row]

CPM: Modi faking war against corruption, black money while claiming to fight them