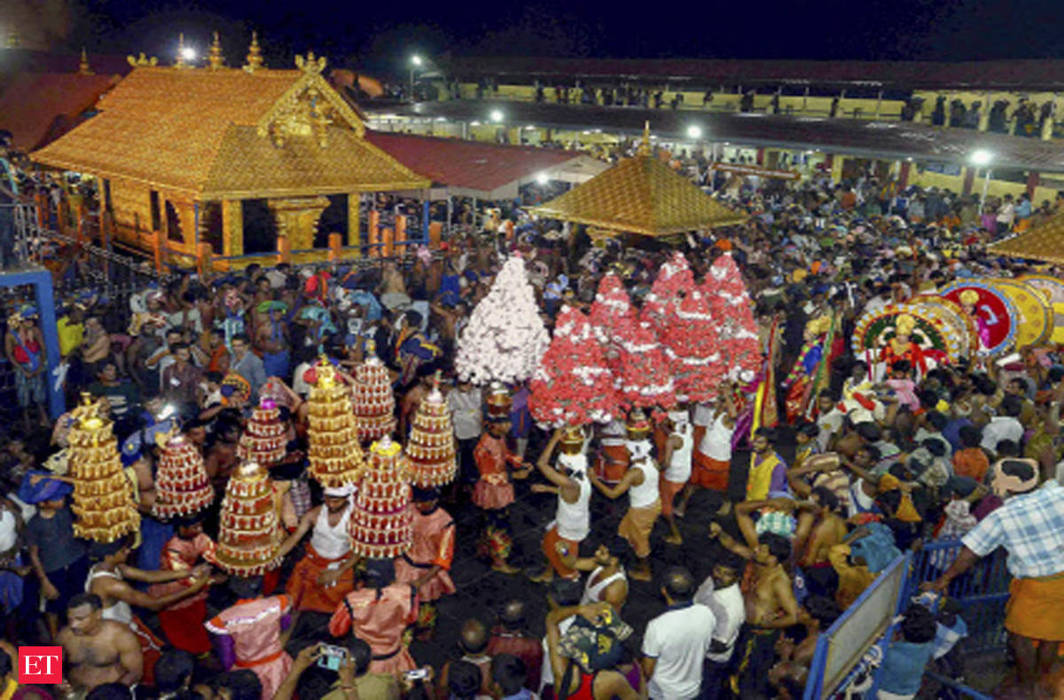 Interestingly, the Travancore Devaswom Board (TDB) that manages the Ayyappa temple did a U-turn today to say that women of all age groups should be allowed to pray there.

The Devaswom Board told the apex court that it has no objection to the entry of women inside the temple and urged the people to “gracefully” abide by the apex court’s verdict.

“People who are opposing entry of women in 10-50 age group in Sabarimala temple should accept the SC verdict gracefully and allowing entry of all women inside temple,” Devaswom Board told SC.

The board, which also comprise state government nominees, told the Constitution Bench that it is high time that a particular class not be discriminated on the ground of “biological attributes”.

“Women cannot be excluded from any walk of life on biological attributes … equality is the dominant theme of the Constitution,” said Dwivedi adding that people should gracefully accept the apex court verdict.

The board had earlier vehemently opposed the PIL by Indian Young Lawyers Association saying that the celibate character of Lord Ayyappa at Sabarimala temple was a unique religious feature which was protected under the Constitution.

Speaking to reporters later, the TDB chief said that the board accepts the top court’s September 28 verdict and believes that there should not be any discrimination.

“Based on the verdict (September 28) we have decided not to file a review petition. The board accepts the SC verdict and if of the opinion that there shouldn’t be any discrimination,” TDB president A Padmakumar was quoted as saying by news agency ANI.

Several organisations including the Nair Service Society (NSS) and the Thantri of the shrine, have sought reconsideration of the verdict.

During the hearing, the petitioners argued that the court cannot force its views upon the people of Kerala who, it said, have not accepted the verdict. The petitioner also claimed that the apex court’s verdict has resulted in disturbing the social peace in the state.

The first to present the case was senior advocate K Parasaran, who was appearing for the Nair Service Society. Speaking for more than 20 minutes, he submitted that the Constitution bench had failed to deal with the interplay of the Constitution’s Preamble and Articles 15, 17 and 25 of Constitution. Parasaran highlighted that Article 15 (prohibition of discrimination), which threw open all public institutions of secular character to all classes of person, conspicuously omitted religious institutions and therefore it was an error to strike down a temple custom under Article 15.

He also asserted that the Supreme Court’s September judgment did not consider the crucial aspect that Article 15 (2) does not cover religious places. The omission to consider this aspect constitutes an error apparent on record, the counsel submitted.

He argued that the practice was limited to a particular age group, and therefore cannot be equated with untouchability — which excluded an entire class of people. Parasaran concluded saying that the exclusionary practise in Sabarimala is based on the character of the deity, which is that of Naishtika Brahmachari or permanent celibate.

Appearing for the chief priest or Thantri of the Sabarimala temple, senior advocate V Giri reiterated that right to pray has been in consonance with the nature and form of the deity. He argued that the restriction in Sabarimala had been based on the character of the deity. Advocate VV Giri argued that any person who asserts right under article 25(2)(b) to worship has to do it in consonance with the nature of deity.

The Kerala government, however, opposed the review petition, saying that it was in agreement with last year’s verdict and urged dismissal of petitions seeking review of the verdict.

Advocate Jaideep Gupta, appearing for the Kerala government, made it clear that the government was opposing the review petitions as no grounds had been made out for review.  The state government said that the ban on women entry is not part of “essential practice of Hinduism” which have the protection of the Constitution of India.

The Kerala government’s counsel also opposed arguments put forward by various petitioners that it was a private issue. “It is about public law issue unless they argue that women between age 10 to 50 are not a class of Hindus,” Jaideep Gupta said.

He also told the bench that it should not consider the tension and violence that followed the judgment. “That social peace has been destroyed is not a ground for reviewing the judgment. Constitutional invalidity cannot be permitted to go on,” he argued.

“Social harmony will ultimately prevail in the state,” the state government told SC.

On September 28, a five-judge constitution bench, headed by the then CJI Dipak Misra, in a 4:1 verdict had paved the way for entry of women of all ages into the shrine, saying the ban amounted to gender discrimination.[/vc_column_text][/vc_column][/vc_row]