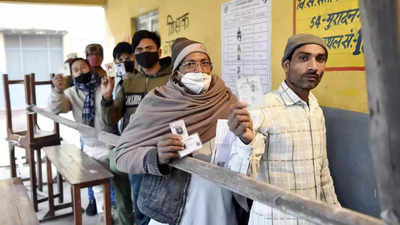 The first phase of the Uttar Pradesh assembly elections started today. The first phase covers 58 constituencies spread across 11 districts. There have been reports of peaceful voting across western UP. However, an issue has emerged in UP’s Shamli district, where the Dalit community has been compelled to vote for BJP.

A complaint has been lodged by the Dalit community, alleging that they were pressured to vote for the party. The incident occurred in Bhainswal, Shamli’s Garhi Pukhta area. According to reports, the police have filed a complaint against District Panchayat member Umesh Malik, who allegedly intimidated the Dalit community in order to bring the BJP to win power.

Umesh Malik is a member of the Seventeenth Legislative Assembly of Uttar Pradesh representing the Budhana assembly constituency.

Neither did we get jobs, nor has there been any improvement in wages. Rising prices are adding to our distress, complains a member of Dalit community.

The first phase of voting in UP has already started and is taking place in 11 districts namely, Shamli, Muzaffarnagar, Baghpat, Meerut, Ghaziabad, Hapur, Gautam Buddha Nagar, Bulandshahr, Aligarh, Mathura and Agra. The polling began at 7:00 am today and is being conducted in accordance with the Election Commission’s Covid rules. The voting will close at 6 pm.