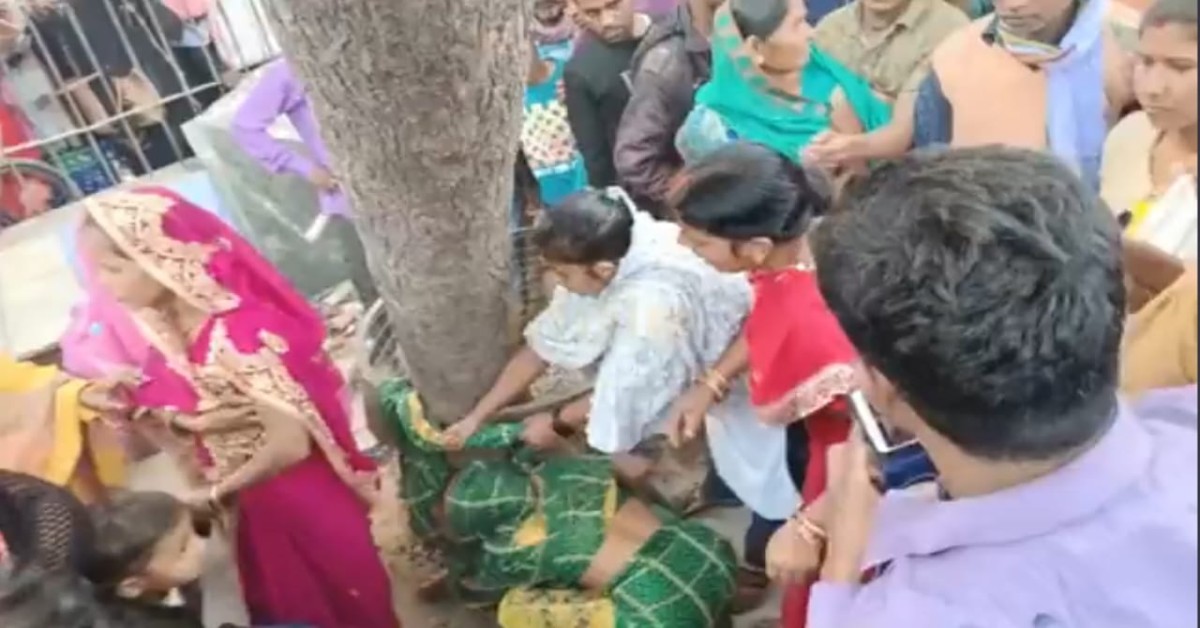 Suspecting theft, a group of women beat up a woman. They did not stop here as they tore her clothes and tied her up to a tree. The incident was reported from Siwan of Bihar.

The video of this embarrassing incident has gone viral on social media.

A girl’s mobile was stolen in Siwan. The gold chain of another woman near her was stolen. The theft that took place in Siwan Sadar Hospital premises was blamed on another woman present there. The woman kept claiming herself to be innocent, but first she was thrashed fiercely by calling her a thief and then the woman who accused her of mobile theft tore the woman’s clothes in front of the crowd.

The incident happened in front of the main gate of Sadar Hospital on Tuesday morning, and people neither stopped the girl from tearing the clothes of that woman nor bowed their eyes. Moreover, many people started making videos of this incident.

Tied to the tree with her sari

The reports say that the woman was caught red handed by people snatching a chain and mobile. Due to being caught stealing at the main gate of Sadar Hospital, no one came forward to save her. Rather, whoever got the opportunity left no stone unturned to beat the woman. Even after beating her up, the anger of the girl whose mobile was stolen did not calm down. Neha, a resident of Goreakothi, tore the clothes of the woman in front of the crowd and with her sari, she tied the woman to the tree. The woman whose chain was stolen was identified as Guddan Devi of Nirala Nagar. Guddan has filed a complaint to register an FIR against the woman with the city police station regarding the theft.

Woman accused of theft is a resident of Chhapra

The identity of the Chhapra resident woman was not made public, because it is also mandatory by law for the dignity of women. The woman who was caught stealing and beaten up by eyewitnesses, claims herself to be innocent. When the information of the incident spread around, the police reached the spot and brought the woman accused of theft to the city police station. Police are collecting information about the crime record of the accused woman. The recovery of the mobile and chain has not yet been confirmed by the police.