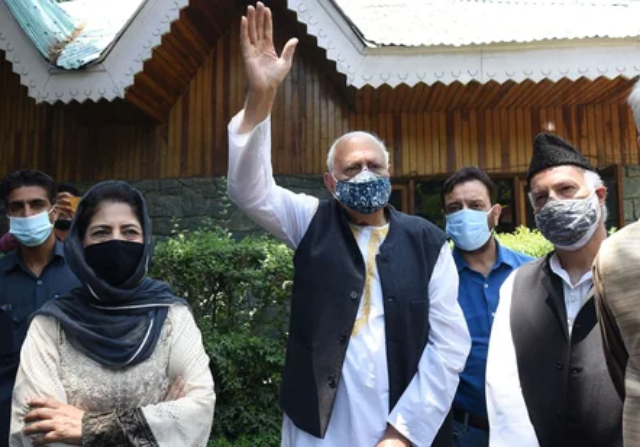 Almost two years after the Jammu and Kashmir lost its statehood and special status, Prime Minister Narendra Modi will chair a meeting with mainstream leaders of Jammu and Kashmir at his Delhi residence at 3 pm on Wednesday to discuss the future course of action for the Union Territory.

The meeting gains importance as sources have indicated that discussions on restoring Jammu and Kashmir’s statehood could be on cards while other reports predicted that it may be related to assembly polls in the region.

Fourteen leaders from eight political parties — including Mufti’s PDP and the National Conference — have been invited to the meeting. The Gupkar Alliance of Mehbooba Mufti and National Conference leader Farooq Abdullah – a seven-party collation formed to push for restoration of statehood and special status — has said it will attend the meeting.

The Congress has also said it would attend the meeting, and that restoration of statehood was its first priority.

The meeting comes ahead of the discussions scheduled in New Delhi on Thursday between Prime Minister Narendra Modi and leaders of the People’s Alliance for Gupkar Declaration (PAGD), a coalition of mainstream parties in Jammu and Kashmir.

With all eyes on the crucial meeting, leaders from several Jammu and Kashmir based parties have reached New Delhi.

The sources have indicated that the Central govt is ready to discuss all issues that the Jammu and Kashmir parties will bring to the table but for now it is focused on getting the delimitation exercise completed and hold elections in Jammu and Kashmir as soon as possible. The government said while restoration of statehood will be considered at an appropriate time, that time has not come yet.

At the meeting on Wednesday, the Deputy Commissioners were asked about problems faced by voters of an area of an assembly constituency which does not have any geographical contiguity, whether voters have to travel long distances in such constituencies or places which fall in one district but are included in a constituency falling in some other district.

On June 3, the office of the Joint Chief Electoral Officer of Jammu and Kashmir, wrote to the DCs of all 20 districts, seeking details on intra-district demographic distribution, distribution of administrative units, pockets of high and low density population, and migratory population.

In December, local body elections were held in Jammu and Kashmir, in which Gupkar Alliance won more than 100 seats and the BJP emerged as the single largest party with 74 seats.

This is the first such political exercise after August 5, 2019 when the Centre decided to abrogate Article 370 of the Constitution that gave Jammu and Kashmir a special status. Apart from this, the Centre also reduced J&K’s status from a state to a UT and bifurcated it.