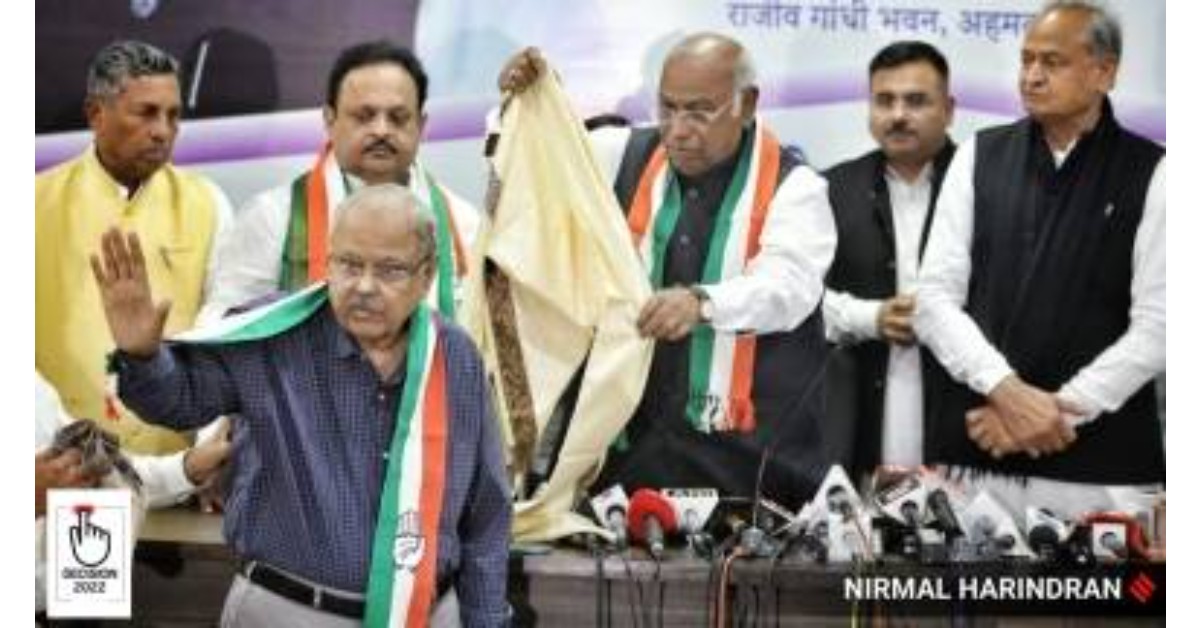 Jay Narayan Vyas, a former Gujarat minister, joined Congress on Monday, along with his son Sameer, ahead of the Gujarat Assembly elections. The 75-year-old former minister resigned from the Bharatiya Janata Party (BJP) earlier this month, citing five personal reasons.

Vyas was felicitated by Congress President Mallikarjun Kharge in Ahmedabad. He was also welcomed by Rajasthan Chief Minister and Congress veteran Ashok Gehlot.

Vyas was a minister in the state when Narendra Modi was the chief minister. He had earlier contested elections from Sidhpur in 2012 and 2017 but lost. Earlier, he said that he will fight the election from Sidhpur but not as an independent candidate.

In his resignation letter, Vyas wrote that he has been actively serving the BJP for the last three decades as per the ideology of the party. He said he is resigning from the party for personal reasons.

He said that the BJP has been targeting leaders one by one in order to remove or replace them. So far, the saffron party has denied tickets to 42 sitting MLAs.

Read Also: Ramdev issues apology for women look good without clothes remark, says his statement has been taken out of context

Congress state unit president Jagdish Thakor said Vyas, who helped BJP build the party in the state, is being ignored by that party. He had recently met Soniaji, Gehlotji and Gujarat Congress in-charge Raghu Sharma.

Reacting to Thakor’s statement, the BJP’s state unit chief said they had given him tickets many times despite his repeated defeats. He stated that the party has a rule that it will not give a ticket to those who have crossed 75 years of age. He concluded that he might have decided to resign because of his election candidacy or for some other reason.

BJP is seeking its seventh term in Gujarat in upcoming elections. The elections for the 182-member assembly constituencies will be conducted in two phases on December 1 and 5. The counting of votes will take place on December 8, along with the Himachal Pradesh Assembly Elections result.