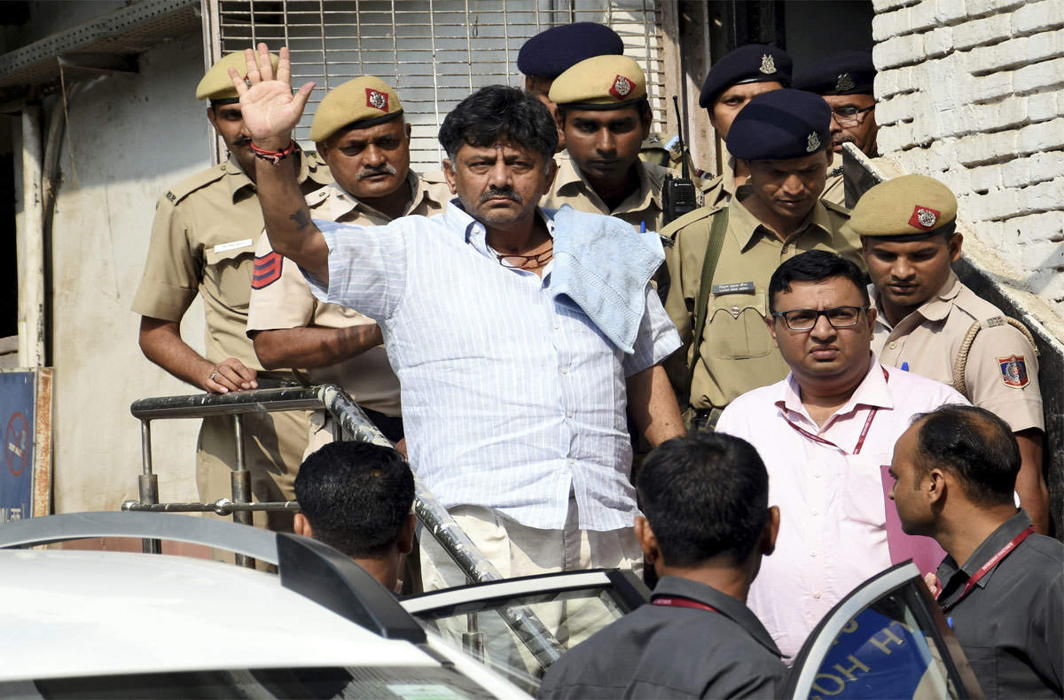 Former Karnataka Minister and Congress troubleshooter DK Shivakumar will continue to remain in Tihar jail as the special court at Rouse Avenue rejected his bail in connection with the money laundering case yet again today (Wednesday, Sep 25).

However, given the health concerns raised by his lawyers, the court has issued necessary directions to the authorities concerned.

Shivakumar has been in custody since September 3 after the Enforcement Directorate (ED) had arrested him after four days of interrogation in relation to the case. The ED had cited Shivakumar’s non-cooperation during the questioning as the reason for his arrest.

After the end of the maximum period of police custody, DK Shivakumar was sent to 14-day judicial custody – till October 1 – on September 17.

Till now, Shivakumar’s bail plea on medical grounds has been rejected by the court after the prosecution told the court that the former minister could tamper with evidence if he walks out.

While his police (ED) custody ended on September 19, he was remanded to judicial custody till October 1 by the Rouse Avenue court.

During the course of arguments, the ED argued that the probe under Prevention of Money Laundering Act, 2002 (PMLA) was operating independently of the offences committed under the IT Act in order to ascertain the source of “tainted” money.

Paying income tax on ‘tainted money’ would not absolve the accused of liability under PMLA, the ED argued.

The ED accused Shivakumar was amassing wealth and property disproportionate to his income on record as an agriculturalist.

Shivakumar’s lawyers countered that investigation under PMLA could not be sustained in the absence of a scheduled offence and mere insertion of Section 120B could not grant jurisdiction to the ED to initiate a probe under the PMLA.

It was further argued that Shivakumar’s income and property, as well the income and property of his family members was a matter of record owing to the affidavits filed by him before the Election Commission for various Assembly elections in Karnataka. Hence, there was no possibility of any wealth or asset bring hidden or unaccounted for.

After hearing the parties at length for more than two days, the CBI court had reserved its order in the bail plea on September 21.

The ED had been probing accusations of money laundering registered against Shivakumar since August 2017, when a cash amount of Rs 8.86 crore was found in his New Delhi residence. The money laundering case is based on a charge sheet filed by the Income-Tax Department last year, alleging tax evasion and “hawala” transactions running into crores.

On September 12, DK Shivakumar’s daughter Aishwarya too had appeared before the ED and was questioned for seven hours in connection with the case. At the time, officials from the ED stated that she was being questioned about a trust fund set up in her name. The ED also interrogated her regarding the increase in her wealth between 2013 and 2018. Shivakumar had declared that his daughter held assets worth Rs 108 crore, ahead of the 2018 state assembly elections. However in 2013, she supposedly had only Rs 1.09 crore.

The ED has also questioned many of Shivakumar’s aides including Karnataka Congress MLA Laxmi Hebbalkar in this case. As part of the probe into the case back in 2017, the Income Tax Department found that some transactions made by him were linked to Lakshmi Hebbalkar. Further, when the raids first took place on August 2, 2017, Shivakumar had allegedly made a phone call to Lakshmi.