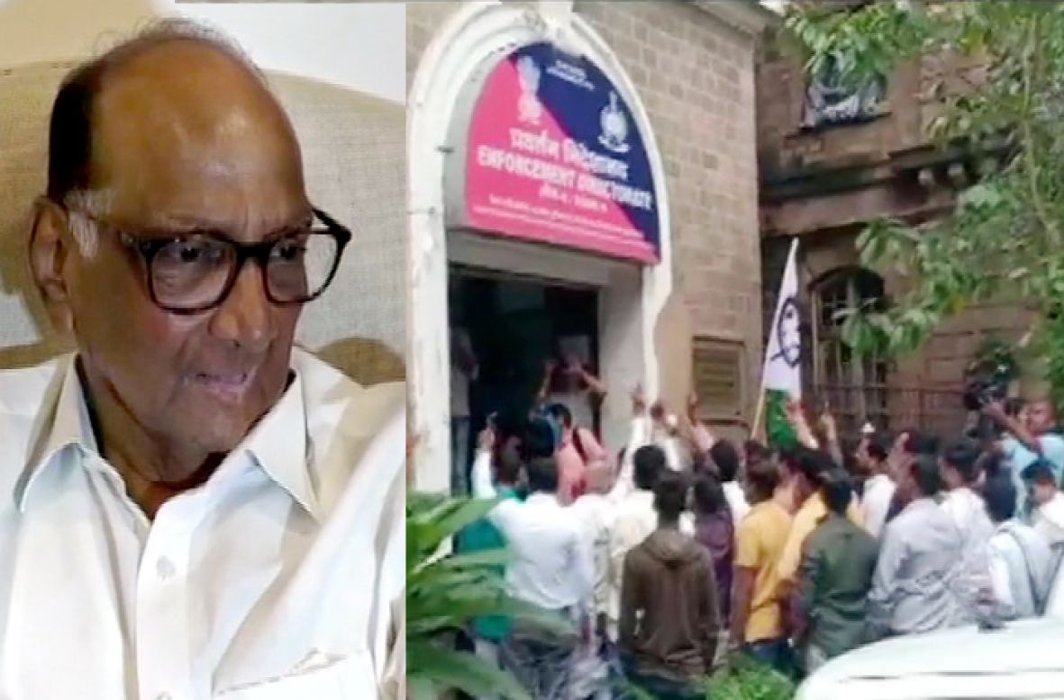 Nationalist Congress Party (NCP) chief Sharad Pawar deferred his visit to Enforcement Directorate (ED) office today – Friday, Sep 27 – to offer himself for questioning in Maharashtra State Cooperative Bank scam after Mumbai Police Commissioner Sanjay Barve requested him not to go to the ED office in view of a possible law and order situation.

Barve as well as other senior officers of Mumbai Police met Pawar in the morning and urged him not to visit the ED office at Ballard Estate.

The ED, which had named in the scam and has faced criticism from various quarters for this, had also communicated to him that he need not appear before it.

“I was informed by the ED that I am not required to come… and in order to maintain law and order in the city, I have decided not to go to the ED office,” Pawar said outside his residence in Mumbai.

Pawar said the ED action against him was aimed at maligning the image of opposition leaders. Thanking parties, including the Shiv Sena, for extending support to him, he said they had stood up against tyranny. He also thanked Congress leaders Rahul Gandhi and Manmohan Singh, who he said had called him. Pawar said he would embark on a tour of flood-affected regions of Pune and Baramati.

Yesterday, Pawar had announced that he would appear before the ED even though he has not been issued summons as he did not want the agency to believe that he had vanished or was avoiding an inquiry. The NCP chief had tweeted, “As mentioned during my press conference yesterday, I will be visiting the Mumbai ED office at Ballard Estate tomorrow, Friday 27 September, at 14.00 hrs.”

He added, “For the next month, I will be campaigning across the state. I will be spending a lot of time outside Mumbai. In such a situation, if the ED decides to send me some sort of love message and in case I am not in Mumbai, they should not think that I have become invisible or am not traceable.”

The restrictions were imposed in anticipation of protests by the NCP cadre. “State NCP’s office is in the same are and there is a possibility that large number of NCP supporters would gather during Pawar’s visit,” an official was quoted as saying by news agency PTI.

Pawar has been named in a complaint on a Rs. 25,000-crore scam involving the sanction of loans illegally by the Maharashtra State Cooperative Bank. The police FIR does not list him as an accused.

The case involves alleged violation of banking laws and Reserve Bank of India (RBI) guidelines while disbursing loans to the state’s sugar factories and spinning mills. Many of those who sanctioned the loans were allegedly linked to the owners of the mill owners. The bank is largely run by NCP leaders, though Pawar is not among them.

A day after he was named in the FIR, Pawar told the media he would be “pleased” to go to jail as he had never experienced it. Denying any role in the alleged scam, the 78-year-old had said: “I would have been surprised had such action not been taken against me after the kind of response I receive during my visits to various districts of the state.”

In an indication that his party could make it an election issue, Pawar also declared: “Maharashtra follows the ideology of Chhatrapati Shivaji Maharaj. We don’t know bowing down before the Delhi takht (centre)”.

Congress MP Rahul Gandhi came out in his support today, saying the case naming Pawar just before the October 21 Maharashtra election smacked of “political opportunism” by a “vindictive government”.