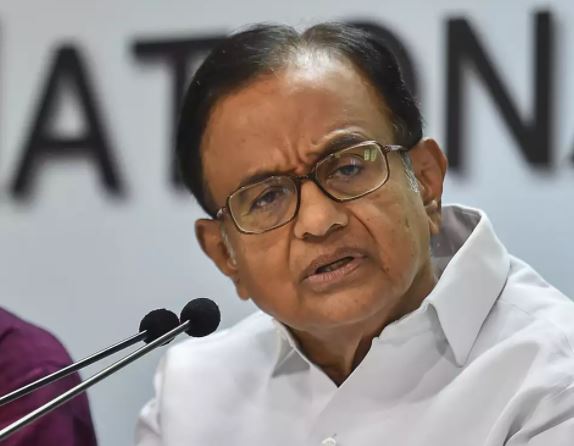 Senior Congress leader and former finance minister P Chidambaram on Tuesday hit out at the Modi government over the issue of rising prices of fuel and other commodities. He also announced that the Congress will raise the issue of inflation in the upcoming Monsoon Session of Parliament.

While addressing a press conference, Chidambaram demanded that the Central government should immediately reduce the prices of petrol, diesel and LPG. In the press conference, Chidambaram also blamed the negligence of PM Modi government for the high inflation and demanded a reduction in fuel prices and GST rates and a review of the import duties to reduce the crushing burden of high inflation. Chidambaram urged that the goods and services tax should be reduced on an array of goods.

Expressing his anger over the high rate of unemployment and wage cuts in the country, Chidambaram accused the Centre for pretending that price rise is a false concern. He said that the Centre’s Narendra Modi government directly responsible for such a bad situation of widespread distress and inflation that has broken the back of the country’s common.

Taking as dig at the Centre, Chidambaram said that the Central government has continued to pretend that the concern about price hike is a false concern and if the government ignores the issue, it will go away.

Despite huge criticism by the opposition, the Modi government has continually increased the prices of petrol, diesel and LPG, Chidambaram said. Listing out the fuel price hike, he said that the fuel prices had reached over Rs 100 in Mumbai and Delhi while the price of LPG is at Rs 835 per cylinder in Delhi and Rs 933 per cylinder in Patna. None of these prices is justified by the price of crude oil which is around $75 a barrel. When crude oil price was $125, the UPA government had provided petrol at Rs 65 per litre and diesel at Rs 44 per litre,” Chidambaram said.

Chidambaram blamed the cesses levied by the central government for the exorbitant prices and said that government collects nearly Rs 4.2 lakh crore annually through them and keeps all that money to itself. He also called the GST, a regressive tax with irrational rates. Referring to NSO data, Chidambaram said the consumer price inflation has reached 6.26%, which is above the upper limit of inflation target set by the Reserve Bank of India (RBI).

Chidambaram also hit out at the Centre’s Covid-19 vaccination programme, terming its promise of vaccinating all adults by December end as an empty boast. He said the states like Odisha and Delhi are facing vaccine shortage and asked the Union health minister to spell out his plans to ensure regular and uninterrupted supply of vaccines to states.

Azam Khan, son back in jail after Covid recovery