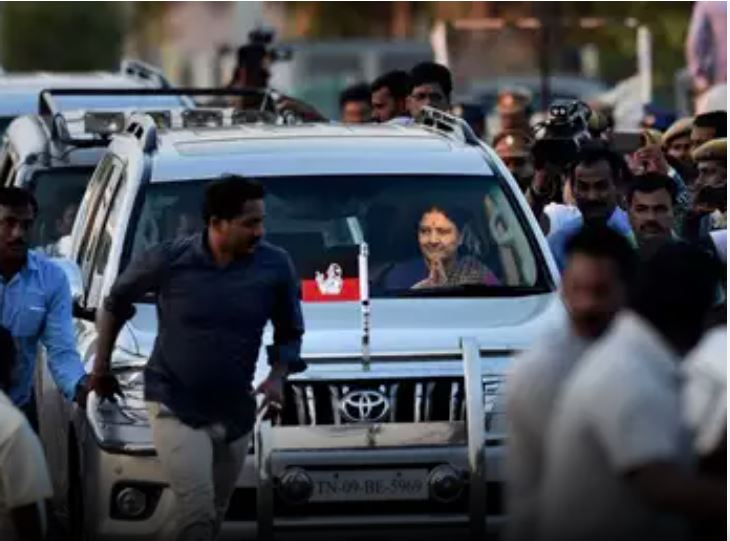 After completing her four-year jail-term for corruption and recovering from Covid-19, the sacked AIADMK chief V.K. Sasikala on Monday returned to Chennai from Bengaluru. Sasikala’s return is set to shake up Tamil Nadu politics ahead of polls due by May, even though she cannot contest for six years because of her conviction. She belongs to the Thevar community, a key vote bank for the AIADMK.

Despite issuing a warning from the AIADMK against using the party flag, she displayed its flag on her car during her return to Chennai. Sasikala, who was released on January 27 after serving 4 year jail term in disproportionate assets case, will be given a grand welcome at least at 32 places with 10,860 people in Chennai alone.

In January, Sasikala contracted Covid-19 infection and when she was released by prison authorities, she was still in the hospital, receiving treatment for the infection. Sasikala subsequently also tested negative for Covid-19 and was discharged from the hospital. She quarantined in a private resort located near Bengaluru airport and scheduled her visit to Chennai for Monday.

While she was in jail, she was removed as AIADMK chief and expelled by E Palaniswami, the man she had handpicked as Chief Minister, as part of a compromise he reached with rebel-turned-deputy O Panneerselvami. While she has challenged her removal in court, the Election Commission has acknowledged the OPS-headed group as the real AIADMK and has permitted them to use the party flag and symbol.

On Sunday night, the Krishnagiri police issued a warning notice to Sasikala against using the AIADMK flag on her car. This comes after the AIADMK lodged a complaint with the DGP against Sasikala for using the party flag on her car when she was released from the hospital. The police said in his statement that Sasikala cannot use the party flag since it’s a violation of law and warned of legal action.

The Krishnagiri police also issued instructions to Amma Makkal Munnetra Kazham (AMMK) saying no more than five vehicles should be allowed during Sasikala’s journey to Chennai and no posters, band or fireworks should be used when Sasikala enters into the district.