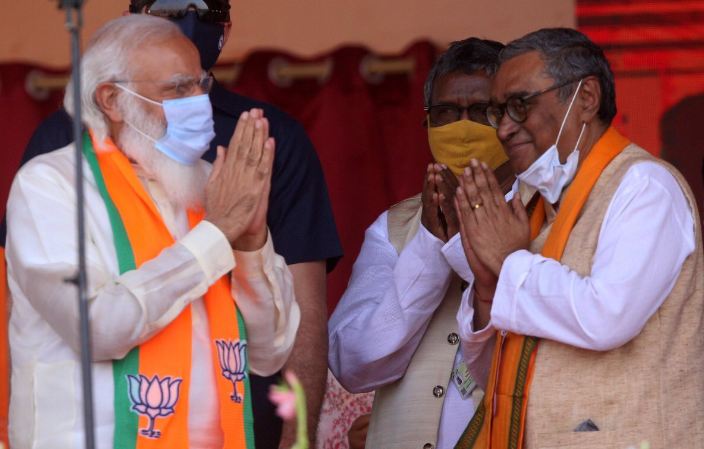 Swapan Dasgupta, a BJP candidate for Bengal election, has resigned as a nominated member of Rajya Sabha a day after Trinamool Congress pointed out constitutional rules to say he would be disqualified from the Upper House if joined a political party.

Dasgupta’s resignation has been sent to the Upper House Chairman M. Venkaiah Naidu, where he has requested that it be accepted by tomorrow.

Announcing his resignation on Twitter, he wrote, I have resigned from the Rajya Sabha today to commit myself totally to the fight for a better Bengal. I hope to file my nomination as BJP candidate for the Tarakeshwar Assembly seat in the next few days,” said the 65-year-old, whose Rajya Sabha term was till April 2022.

On Sunday, the saffron party fielded Dasgupta from the Tarakeswar Assembly constituency in West Bengal’s Hooghly district. A day after Trinamool Congress MP Mahua Moitra has questioned his  candidature.Taking to Twitter, Moitra had pointed out that according to the 10th Schedule of Constitution, the nominated members of Rajya Sabha can be disqualified if they join any political party after a six-month period from their oath.

In her tweet, she also mentioned that Dasgupta was sworn in as a nominated member to the upper house in April 2016, and hasn’t declared any allegiance to the BJP.

Seeking to clarify his position after tendering his resignation, Dasgupta said between contesting election and having a particular status in the Rajya Sabha, there are a lot of outstanding issues. The nomination process involves resolving all these. And all these issues will be resolved by the time he files nomination, which is expected to be done by Thursday or Friday, said Dasgupta.

When asked if the resignation was in response to TMC MP Moitra’s post, Dasgupta reiterated that there are a lot of outstanding issues, a lot of clearances which we have to get from various institutions including parliament before you file your nomination. And all these will be secured before I file my nomination, he added.

The Congress party has also objected to Dasgupta’s candidature in upcoming Bengal assembly polls. In a letter to the Rajya Sabha chairman, Congress chief whip Jairam Ramesh said that Dasgupta has neither resigned from the House before contesting election nor has he joined any party.

Meanwhile, the West Bengal Assembly election will be held in eight phases from March 27. The results will be announced on May 2.