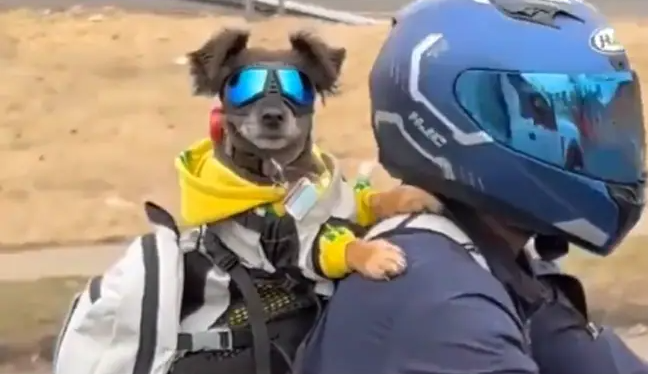 A Video is doing rounds on the social media platform, where a dog was seen living everyone’s dream life. In the video, the dog that is considered a human’s best friend was seen enjoying the bike ride with its owner in full of style.

The video has received an overwhelming response from internet users. It has amazed more than 8 million of people on the photos sharing app Instagram. However, it is not confirmed yet from where the clip has been generated.

The viral clip, which looks like has been recorded from inside a car, shows that a bike rider stops his vehicle at a traffic signal. The person on the bike with a helmet on waved at him. But it seems like the camera person was curious to know whose was that guy, enjoying the ride. In the friction of seconds, when the furry guy, admiring the gorgeous views, turned their head towards him. It made him go wohooo after seeing the little dog with cool shades and jacket.

The video also shows that the dog was quietly sitting on the back seat of the motorcycle while putting its paws on the owner’s shoulders. The clip clearly showed that the animal was having a great time with its owner and living the best life.

When the video went viral on the internet, many people reshared their social media profiles with long captions. One of the users wrote that the dog is living the life which he always dreamed of. Another user wrote that every animal who can not speak deserves a life like this one only. While another user thanked the person for treating his dog right. 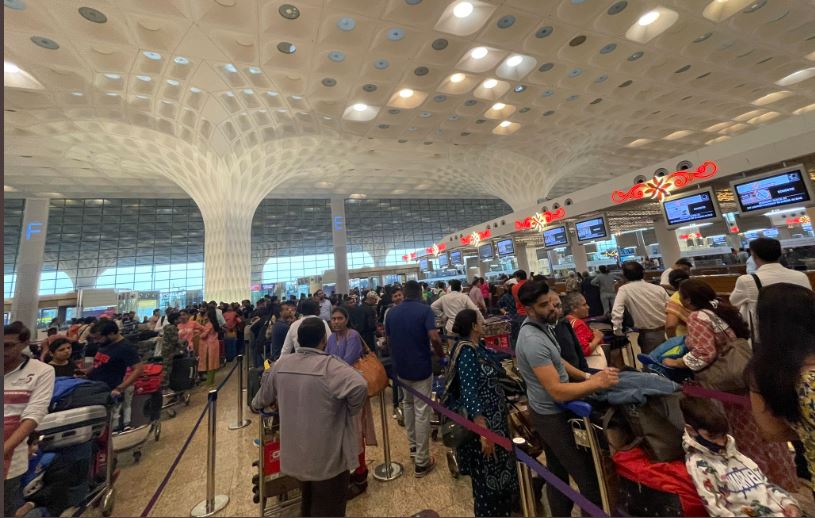 Mumbai international airport on Thursday witnessed long queues at the check-in counters after the server got crashed for almost an hour. A massive crowd gathered at the gates in order to board their scheduled flights. Then authorities decided to allow passengers by checking their documents manually.

Amid this several airline services also have been impacted due to the sudden system failure at one of the biggest airports in the country. The airport authority said that inconvenience has been caused after a network cable was cut due to the ongoing work elsewhere in the city.

Reacting to the system failure, Central Industrial Security Force in its explanation said that due to the server being down at Mumbai International Airport as the crowd was more than normal. In addition to that, the authority said that they somehow managed the crowd and no chaos have been created during the manual passes.

The airport officials also released a statement, requesting passengers to provide some extra for check-ins due to the system failure and asked them to connect with their respective airlines. They further added that special teams are given the task of manual processing to facilitate all passengers. We sincerely regret the inconvenience and thank our passengers for their understanding, Mumbai international airport limited added this in its official statement.

After seeing or witnessing a huge line at the check-in gate, many passengers expressed their anger over the social media platform Twitter. One of the users wrote that a system crashed at Mumbai airport. The crazy crowd and long queues. Expect delayed flights and more. To which AirIndia replied saying they understand that delays are certainly uncomfortable. their team is working diligently to minimize the inconvenience. They’ll be in touch for further updates.

Another user wrote the terrible situation at Mumbai T2 Airport at the moment. Server failure. Full chaos. If you’re flying from Mumbai today, exercise caution. Got in after waiting for close to one and a half hours at the baggage drop counter. #MumbaiAirport

Piyush told the police that he was returning to home from Chikhali when 30 to 40 people attacked him and damaged his car. 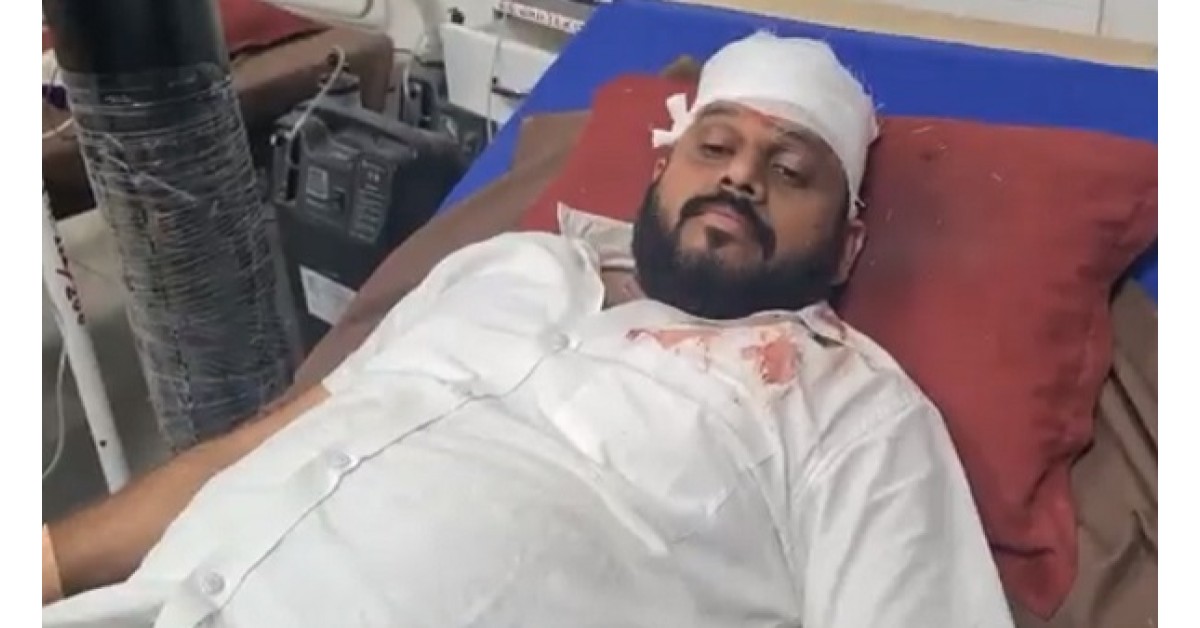 Bharatiya Janata Party (BJP) candidate Piyush Bhai Patel from the Vansda assembly constituency alleged that he was beaten by a group of people in the wee hours of Thursday ahead of the first phase of the Gujarat Assembly Elections.

According to the reports, Piyush Patel was travelling to Vandervala village from Pratapnagar when the attackers threw stones at his car and attempted to vandalize the vehicle. The incident took place near Jari village.

Piyush told the police that he was returning to home from Chikhali when 30 to 40 people attacked him and damaged his car. He suffered severe injuries and was immediately shifted to the Cortez Hospital.

BJP has accused Congress candidate Anant Patel’s supporters of staging the attack. SK Rai, Deputy Superintendent of Police of Navsari, said a case has been registered at the Vansda Police Station and the investigation into the matter is underway. SP also said that four to five vehicles were also damaged in the incident.

Gujarat is currently undergoing the first phase of the assembly elections. The state is witnessing a fierce battle between three political parties. BJP is fighting to retain its seat for the seventh consecutive time while Congress is seeking to make a comeback in the state with AAP fighting for the first time in Gujarat.

There are now 39 political parties vying for election, and they have fielded 788 candidates, including 718 males and 70 women. The fate of the 788 candidates who are in the running for the first phase will be decided by the votes cast by a total of 2,39,76,670 voters by today at 5 pm. 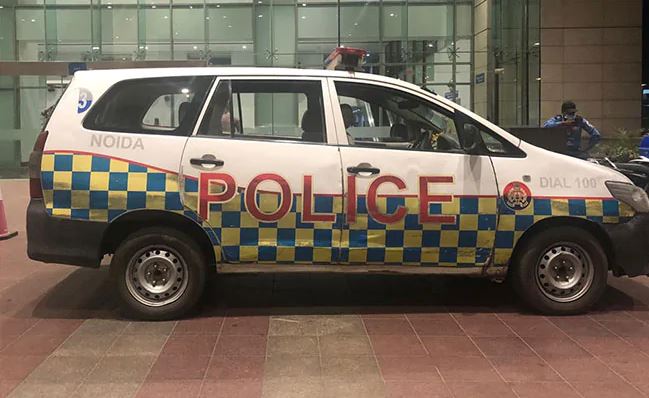 An incident has been reported from Uttar Pradesh’s Noida on Thursday, where a Non-Resident Indian or NRI, who came all the way from the United Kingdom for his daughter’s wedding, forgot his bag full of expensive jewelry and other valuables stuff worth more than Rs 1 crore in a cab.

Reports say that the person Nikhilesh Kumar Sinha, a resident of Lond was on his way to attend his daughter’s wedding ceremony at Samriddhi Grand Avenue, at Amrapali Green Valley in Greater Noida West. When he reached the venue and realized that the jewelry bag is missing and suspected that he might leave it in the cab, he immediately reached to the police station to file a complaint.

On the basis of Sinha’s complaint, Greater Noida Police took charge of the situation, traced the cab driver, and recovered the bag within less than 4 hours.

In-charge of the local police station, Anil Kumar Rajpoot told the media that the NRI family approached the police station sowmewhere around 4 to 4:300 pm after which a disgnated team launched a search operation immediately. He said the family who had a suspicion about the cab driver, provided enough details about him that helped them to trace his live location. The bag was recovered from Ghaziabad’s Lal Kuan, the police in charge added in his statement.

Meanwhile, when the police caught the driver, he in his statement said that he was not even aware of what the passenger left in his car. He further explained that he did not even touch the bag and asked the police to check everything.

This is not the first time such incidents have been reported from Uttar Pradesh. Earlier, a similiar incident hit the headlines, where a lady forgot her bag full of cash worth Rs 2 lakh in the cab. Later, the lady approached the police after which cops traced the vehicle and recovered the bag.