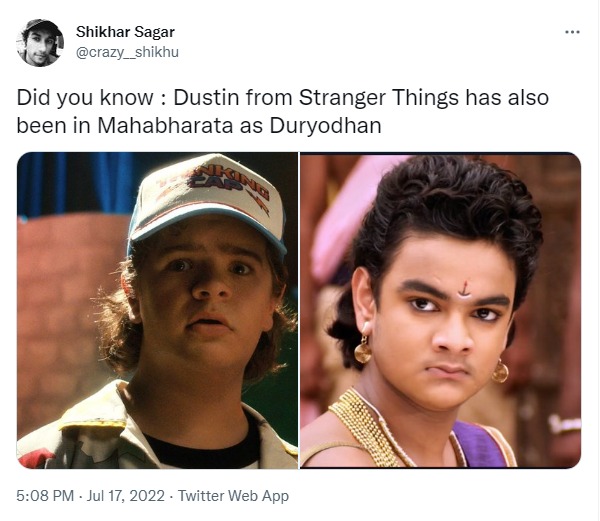 The post was uploaded by a user GSingh on Reddit two years ago and people were quick to notice the resemblance.

Celebrities’ doppelgangers are the newest craze in the Hip Hop culture, and people never fail to impress with their inquisitive talent to find the person who resembles the celebrities. They somehow find a similarity in their looks. And the next in line is Gaten Matarazzo, who played the role of Dustin in Stranger Things.

Who is Alam Khan?

Alam Khan is an Indian actor, model, and dancer. He had earlier played the role of Duryodhan in the Indian mythological show “Mahabharat” in 2013–14. People are finding a strong resemblance between the two. The 23-year-old is best known for his role in Kota Factory.

You don’t believe it? Watch it yourself!

The post was uploaded by a user GSingh on Reddit two years ago and people were quick to notice the resemblance.

One of the users wrote The resemblance is pretty spot on. Another user hilariously responded that Alam Khan is on the Stranger Things Subreddit. The guy used to be my classmate once.

For the unversed, Gaten Matarazzo is a 19-year-old American actor who has a rare genetic condition called Cleidocranial Dysplasia, or CCD, which affects the development of bones and teeth.

Rijuta posted a selfie on her social media handle in somewhat the same pose as the actor. In the photo, the 30-year-old can be seen hiding the rest of her face with only her eyes being visible, marking a resemblance to Deepika Padukone.

In other entertainment news, India’s biggest courtroom comedy, Case Toh Banta Hai, is all set to premiere on July 29 on Amazon miniTV and Fire TV, with new episodes releasing every Friday.

Massive rain was predicted in Delhi, Noida and Ghaziabad today, what happened IMD?