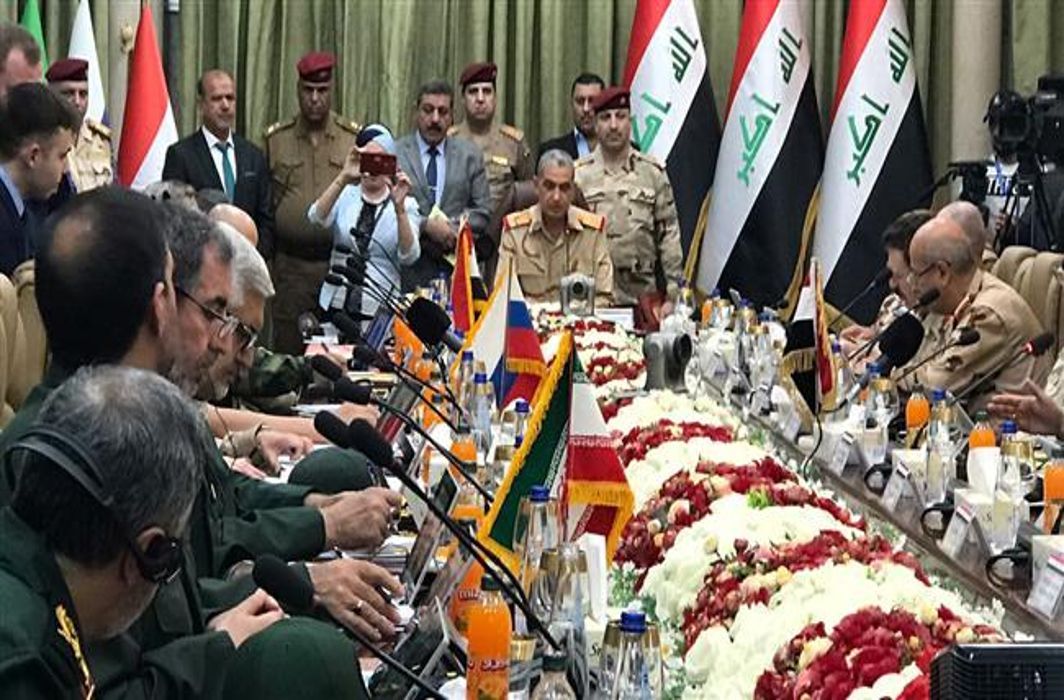 Working to counter alleged US-Israeli middle-east plan, senior military commanders from Iraq, Russia, Iran and Syria have met in Baghdad and exchanged views on security and intelligence cooperation on Saturday.

According to Tehran based Press TV, the commanders from the four countries, which have joint operation rooms to coordinate the fight against the Daesh (IS) terror group, discussed ways and means to “strengthen cooperation and coordination in terms of security and intelligence among these countries”.

The Iraqi Defense Ministry said it had received delegations led by deputy chiefs of staff from three countries.

The head of Syrian delegation, Lt Gen Salim Harba said that the four countries were in agreement over tackling terrorism, which is a threat to humanity. He also warned that US proxies were planning a new chemical attack in Syria to pin the blame on Damascus and justify a new aggression against his country.

Damascus has acknowledged the support by Tehran and Moscow which has enabled Syrian army to speed up its gains on various fronts against Daesh (IS) and other militant groups.

Daesh started its campaign of terror in Iraq and Syria in 2014, occupying territories in the two countries and establishing a self-proclaimed “caliphate.”

The Daesh (IS) group was gradually driven out of all the land it had occupied in Iraq and Syria and both countries announced Daesh’s territorial collapse in December 2017. However, Daesh remnants are now believed to be hiding in the Iraqi-Syrian border region.

United Nations has recently released a report saying that between 20,000 and 30,000 Daesh members are still holed up in Iraq and Syria.

In a purported audio recording in Arabic released last month, Daesh ringleader Ibrahim al-Samarrai, aka Abu Bakr al-Baghdadi, called on his followers to keep up their terror attacks.

Syria’s official SANA news agency reports that the first security confere4nce for quadripartite coordination states was held on Saturday in Baghdad with the participation of assistant chiefs of staff of the armies of Syria, Iraq, Russia and Iran.

US Cancels $300m Aid to Pakistan for Inaction against Terrorists