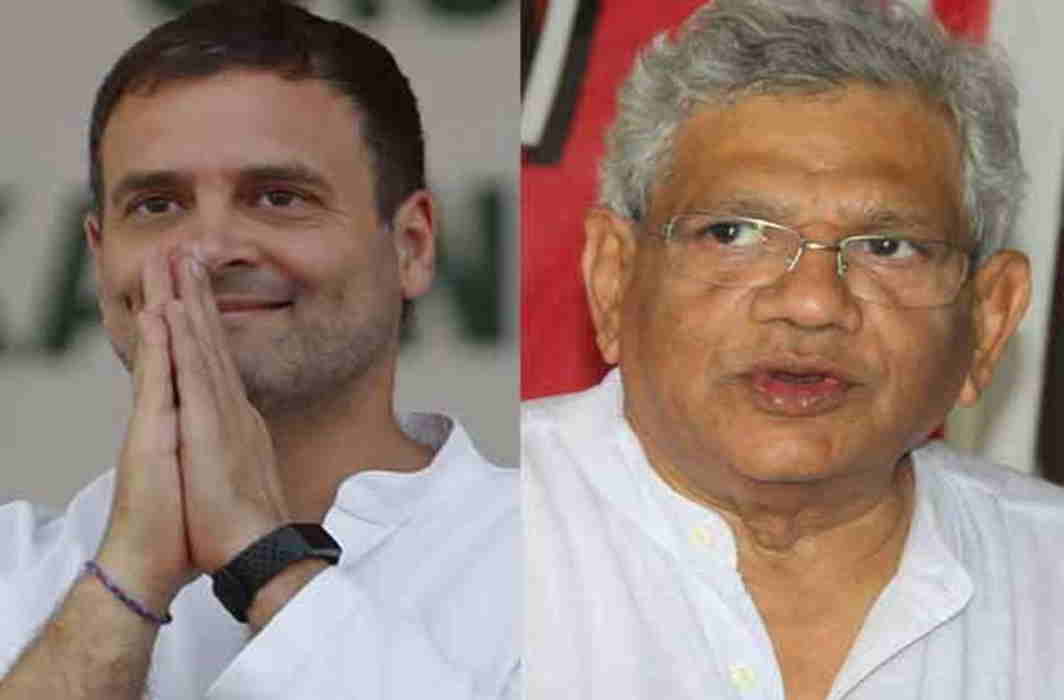 Former Congress president and MP from Wayanad Rahul Gandhi was today (Thursday, July 4) granted bail by a Mumbai court after he pleaded ‘not guilty’ in a defamation case filed by a Rashtriya Swayamsevak Sangh (RSS) activist for allegedly linking the organisation to the murder of journalist Gauri Lankesh in 2017, PTI reported.

Communist Party of India – Marxist (CPM) General Secretary Sitaram Yechury, who is also named in the defamation case and pleaded ‘not guilty’, was similarly granted bail.

The bail came on a surety of Rs15,000 given by former parliamentarian Eknath Gaikwad on behalf of Rahul Gandhi, according to ANI.

A day before, Rahul Gandhi formally quit as Congress president, releasing a letter to CWC to this effect. After getting the bail today, he said, “It is a battle of ideology. I stand with the poor, the farmers. Aakraman ho rahahai, maza aa rahahai (attack is taking place and I am enjoying it.”

The complainant in the defamation case, RSS worker Dhrutiman Joshi,claimed that within 24 hours of Lankesh’smurder, Rahul Gandhi told reporters that “anybody who speaks against the ideology of the Bharatiya Janata Party (BJP) and RSS is pressured, beaten, attacked and even killed.”

The petitioner alleged that CPM General Secretary Sitaram Yechury had also claimed the RSS ideology and workers were responsible for the murder. Yechury was also summoned by the court in February.

Today, the court read out to Rahul Gandhi and Sitaram Yechury the complaint and asked if they were pleading guilty or not guilty to the charges levelled against them.

The two leaders, who pleaded not guilty, will now face trial during which the court would record their statements and that of the complainant and other witnesses.

“Gandhi honoured the summons issued against him by this court. He has pleaded not guilty which means he will face trial. The court has posted the matter for further hearing on September 22,” Gandhi’s lawyer Kushal Mor said.

Lankesh, a journalist who was known for her strident views against Hindutva politics, was killed at her home in Bengaluru by unidentified gunmen on September 5, 2017. Her murder sparked protests around the country and was seen by many as another in a spate of attacks that targeted activists and writers critical of Hindutva outfits.

In November, a Special Investigation Team of the Karnataka Police said Lankesh’s killers were linked to Hindutva organisation Sanatan Sanstha and her murder was part of an “organised crime”. The Indian Express reported the SIT chargesheet mentioned that the killers were trained by accused in Malegaon blast case. It needs to be clarified that Pragya Thakur’s name was not among those mentioned.

Rahul Gandhi has also been named in a defamation case filed by another RSS worker for claiming that the Sangh was responsible for Mahatma Gandhi’s assassination. The Congress leader made the statement during a rally in Maharashtra before the 2014 General Elections. The case is pending at the magistrate’s court in Bhiwandi in Maharashtra. In 2015, Gandhi turned down the Supreme Court’s offer to express regret in order to get the defamation suit quashed. He stood by his remarks when he appeared before the Bhiwandi court in November 2016 but was granted bail.

There are five different cases for which Rahul will have to appear in courts across the country to defend statements he made against BJP and RSS while campaigning for the Lok Sabha polls, said a media report.

Rahul has to appear next before a Patna court on July 6 in connection with a defamation case filed against him by deputy chief minister Sushil Kumar Modi for asking “why all thieves have Modi as their title (surnames)”.

Rahul will appear before an Ahmedabad court on July 9 for his “murder accused” reference to BJP chief Amit Shah, while on July 12, he will appear before another Gujarat court in criminal defamation suits filed by the Ahmedabad District Cooperative Bank and its chairman. On July 24, Rahul is scheduled to appear before a Surat court, for allegedly defaming the entire Modi community by saying all “Modis are thieves”.

While Rahul Gandhi faces cases  for ‘defaming’ RSS, the Congress today posted a series of tweets, including a one-minute video, claiming the RSS has ‘consistently participated in anti-India activities’.

“Think you know what the RSS is all about, think again. The Rashtriya Swayamsevak Sangh has consistently participated in anti-India activities, including pledging loyalty to the British, instigating violence & assassinating Mahatma Gandhi,” the tweet said.

The one-minute video titled RSS for Dummies claimed that RSS founder ‘KB Hedgewar ordered the Sangh not to participate in Satyagraha’. “Sangh leaders encouraged members to join the British civic guard… RSS’ non-participation in India’s Independence was complimented by their British masters… The Sangh opposed our national flag! Anti-national, much? Nathuram Godse shot and killed Gandhi,” the video claims.

In the video, Congress has also alleged that the RSS treats Manusmruti ‘bigger’ than the Constitution of India.

The post also comes a day after Gandhi stepped down as Congress president taking responsibility of the debacle his party faced in the recently concluded Lok Sabha polls. But beyond admitting his failure in leading the party, Gandhi, in his four-page letter, also blamed the RSS for succeeding in its mission to capture India’s institutions’.

“Our democracy has been fundamentally weakened… There is a real danger that from now on, the election will go from being a determinant of India’s future to a mere ritual… This capture of power will result in unimaginable levels of violence and pain for India. Farmers, unemployed youngsters, women, tribals, Dalits and minorities are going to suffer the most. The impact on our economy and the nation’s reputation is going to be devastating,” Gandhi said in his resignation letter.

Think you know what the RSS is all about, think again. The Rashtriya Swayamsevak Sangh has consistently participated in anti-India activities, including pledging loyalty to the British, instigating violence & assassinating Mahatma Gandhi. #RSSvsIndiapic.twitter.com/z0jK3sXuRa