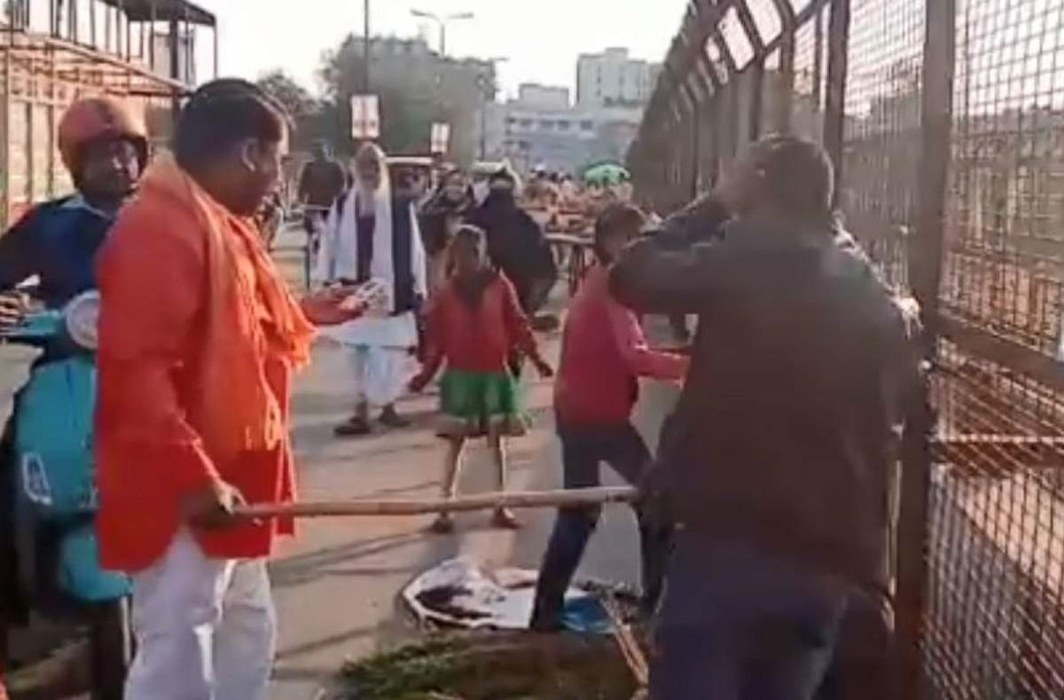 [vc_row][vc_column][vc_column_text]Men from a fringe right-wing group in Lucknow attacked two Kashmiri dry fruit vendors on Wednesday evening (March 6).
The attackers have been arrested after videos of the attack were widely shared.

In one video, the vendors were being abused, slapped and beaten up brutally by the men dressed in saffron and their wares were thrown around.

Another video shows the attackers ask the second vendor to show his identity card as he tried to pack up and leave. The attackers called the victims “stone pelters”. The dry fruit sellers obliged but the men continued to beat them.

One of the attackers, Bajrang Sonkar, who was arrested, is affiliated to the Vishwa Hindu Dal and has 12 criminal cases, including a murder case registered against him, Senior Superintendent of Police Kalanidhi Naithani said.

Another individual, Himanshu Awasthi, who claims to be the president of the Vishwa Hindu Parishad, has been posting on Facebook, claiming that he and his men were responsible for the attack. He also reportedly shared a video of the incident, which has since been taken down.

Mohammmed Afzal Naik and Abdul Salaam, however, were rescued by some of the locals, who advised the attackers not to “take law into your own hands.”

“These men just descended on us. They started beating us and calling us terrorists. We have been coming for 20 years. Something like this has never happened with us before,” one of the dry fruit sellers said while describing the traumatic moments to reporters.

“They said we are terrorists. We were told that we sell items here and throw stones there. They started thrashing us. They asked for our Aadhaar cards. We showed it to them,” Mohammmed Afzal Naik said.

“This is a very unfortunate and one-off incident which has happened. We will crack down on such incidents with the entire force of the law. Nobody is above the law and nobody can target innocent citizens like this…. The strongest possible action will be taken to target innocent Kashmiris,” senior police officer Anand Kumar told NDTV.

Nothing will do more damage to the idea of India in J&K than videos like these. Keep thrashing Kashmiris like this on the streets at the hands of RSS/Bajrang Dal goons & then try to sell the idea of “atoot ang”, it simply wont fly. https://t.co/MYkuEuDLjj

Kashmiris are being hounded & punished. The culprits here were clad in saffron kurtas & are from VHD. They have no fear & in fact uploaded the video on SM. GoIs conspicuous silence is actually a political tactic to encourage such elements & communalise the atmosphere until polls. https://t.co/PuSZsZyiyY

Several other parties, including the Congress, the Aam Aadmi Party and Asaduddin Owaisi have also condemned the assault.