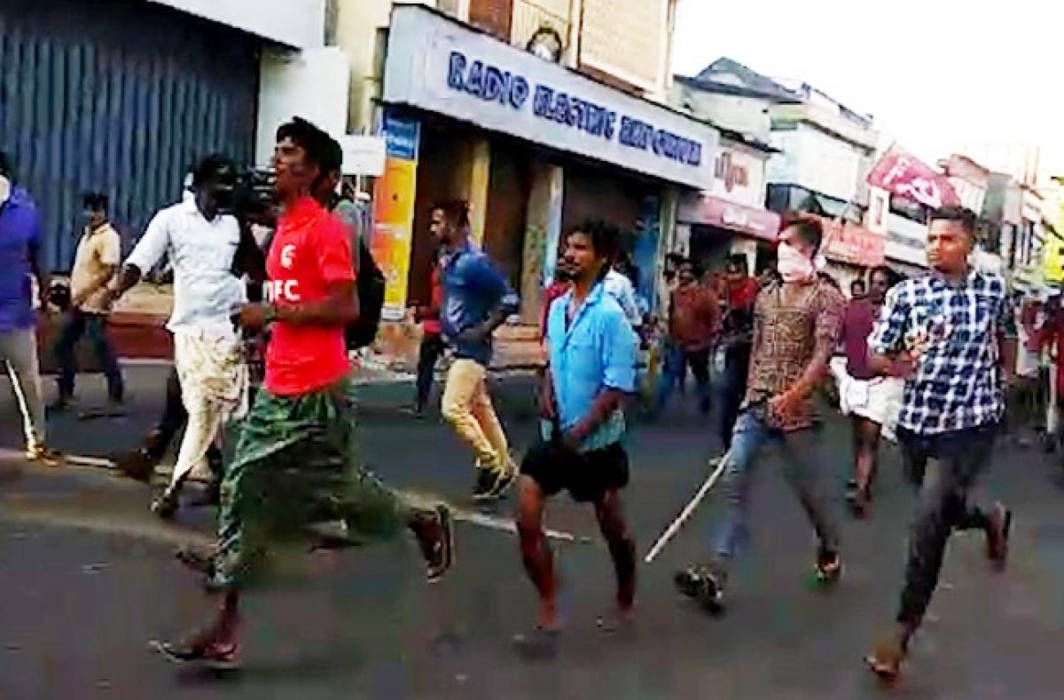 [vc_row][vc_column][vc_column_text]Violence continued in many parts of Kerala today (Saturday, Jan 5) after the entry of two women in their 40s into the Sabarimala temple even as the police have arrested more than 1800 people, said a report in The Hindustan Times (HT).

The northern Kerala district of Kannur, which has frequently seen clashes between BJP/RSS and CPI(M) workers, is in the grip of violence yet again with orchestrated attacks on houses of leaders of both parties, creating major law and order problems for the state police, reported The Indian Express (IE).

Around 9:50 pm on Friday, crude bombs were thrown by unidentified assailants at the home of CPI(M)’s Thalassery MLA AN Shamseer, said IE report citing police. A case was registered and an investigation was underway. The CPI(M) leader was not present at his home when the incident occurred.

Two shops and the house of a CPI(M) local leader at Adoor were also attacked with bombs on Friday. Seven persons were injured in these attacks.

An official at the Thalassery police station confirmed three similar attacks Friday night at the homes of influential political leaders in their station jurisdiction. Former CPI(M) district secretary P Sasi’s home near the district court was attacked with crude bombs around 11 pm. the window-panes of the house shattered in the incident. The CPI(M) leader’s wife and son were present at the time.

Around 11:30 pm, the Thalassery ancestral home of BJP Rajya Sabha MP V Muraleedharan was hit with crude bombs in what is being seen as a retaliatory attack. Thalassery BJP Mandalam president Sumesh’s house was also bombed. The house of RSS leader Chandrasekharan was also targeted with country-made bombs.

A worker of the ruling Communist Party of India (Marxist) was stabbed in Iritti in Kannur on Friday night.

A bomb blast was reported from Perambra in Kozhikode district, while a CPI (M) worker’s house was attacked.

Thalassery, which falls on the southern coastal border of Kannur district, is known to be a stronghold of the ruling CPI(M) but has in recent times, developed certain pockets falling under the sway of the RSS.

To prevent the violence from escalating, the state DGP Lokanath Behra has stepped up security especially in Kannur, Kozhikode districts where the recent shutdown invoked by the Sabarimala Karma Samithi, an RSS-backed outfit, had led to a series of violence and subsequent arrests.

The ‘Operation Broken Window’ of the state police, to find those behind the violence, has been stepped up to bring peace and order in the state, the police chief said.

Widespread violence had broken out since Thursday when a strike was called by the Sabarimala Karma Samithi, an umbrella group of Hindu groups, and supported by the BJP to protest the entry of two women – Bindu Ammini, 42, and Kanakadurga, 44 – into the temple on Wednesday.

The dawn-to-dusk shutdown brought the state to a standstill. Protesters hurled crude bombs and stones as they rampaged through the streets of Kerala, fighting pitched battles with police and political rivals, leaving scores of people injured including three BJP workers in a knife attack, officials said.

They attacked over 20 offices of the ruling CPI(M) and its other Left allies, and clashed with police, leaving at least 31 personnel injured. At least ten journalists were also attacked and the Kerala Union of Working Journalists decided to boycott the press meets called by the BJP, said the HT report. Journalists also staged a protest march.

At least 50 houses of workers of rival parties, primarily BJP and CPI(M), were also attacked on Thursday night. In Adoor, 40 houses were attacked.

The Pinarayi Vijayan government remained firm on its decision to uphold the September 28 Supreme Court verdict allowing women of all ages to enter the hill shrine. Sasikala, a 46-year-old woman from Sri Lanka, became the third person to successfully undertake the Sabarimala pilgrimage with police assistance on Thursday night.

Sasikala entered the temple ten minutes before it was about to close at 11pm on Thursday and was accompanied by her husband. She claimed her uterus was removed after an operation so she does not come under the category of menstruating women.

Police confirmed Sasikala visited the temple and said she initially denied the report as part of a strategy to ensure her safe return. Closed-circuit television cameras also showed their presence at the temple.

The BJP has been scathing in its attacks on Vijayan. Union Minister Ananth Kumar Hegde has termed the state government’s handling of the Sabarimala issue as the “daylight rape” of Hindus. Party leader V Muraleedharan also alleged that Ms Bindu and Ms Kanakadurga were Maoists, and the communist government in Kerala was guilty of helping them desecrate a religious site.

Incidentally, the chief priest had decided to close the sanctum sanctorum of the temple for over an hour in order to perform a “purification ceremony” after the women’s visit. Kerala Minister EP Jayarajan called it contempt of court because untouchability is against the law.

The Supreme Court will start hearing a legal challenge to its previous ruling on January 22.[/vc_column_text][/vc_column][/vc_row]

Walls of hatred erected in name of religion, dissent stifled, is this the India we dreamt of? Naseeruddin Shah in Amnesty video