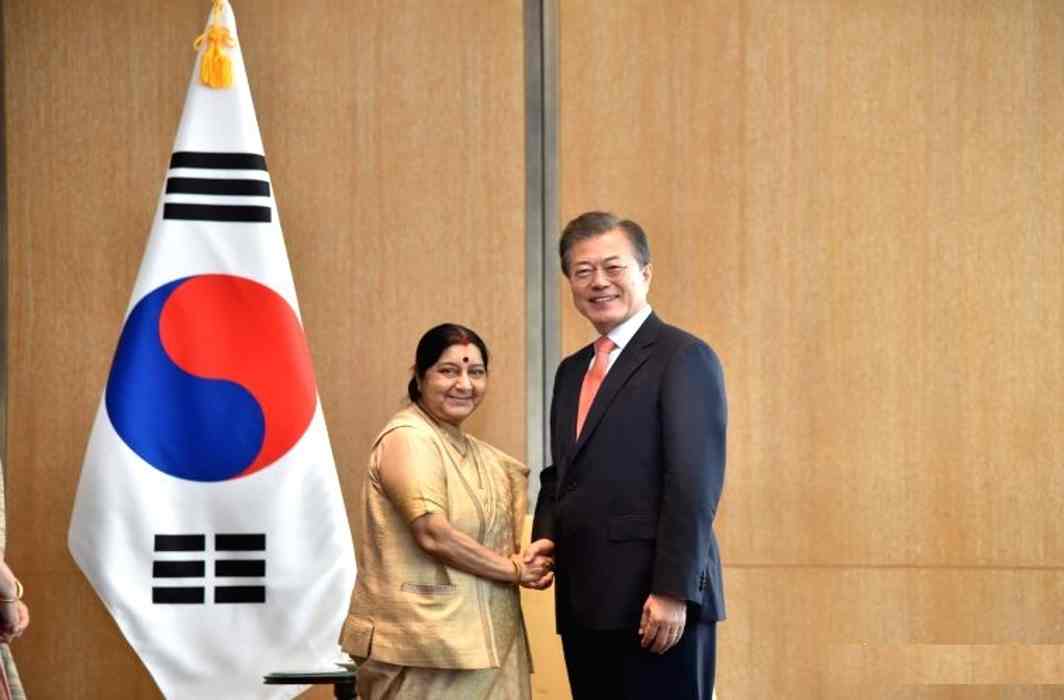 Delegation level meeting with PM Modi will be held on Tuesday

According to sources, Swaraj and President Moon had positive discussion on further elevating the special strategic partnership by expanding ties across several sectors. The meeting held at Hotel Oberoi, where the visiting dignitary is staying.

Raveesh Kumar, spokesperson of Ministry of External Affairs posted a tweet on the meeting:

The South Korean President is leading a delegation comprising senior members of his cabinet, officials as well as industry captains. This is President Moon’s first-ever state visit to India after he took over as the President last year.

In the afternoon President Moon will next visit the Gandhi Smriti with Prime Minister Narendra Modi, from where the two leaders will head to a Samsung plant in Noida.  President Moon is also scheduled to attend the India-Korea Business Forum later in the day. Vice President Venkaiyah Naidu will also call on the visiting dignitary on Monday evening.

On Tuesday, he will be accorded a ceremonial reception at the Rashtrapati Bhawan which will be followed by his visit to Raj Ghat for paying floral tributes to Mahatma Gandhi.

Prime Minister Modi will then hold official talks with the South Korean President at Hyderabad House. The two leaders will also address the India-South Korea CEOs Roundtable. A number of agreements are likely to be signed during the visit.

In the evening, President Moon will meet his Indian counterpart Ram Nath Kovind, who will also host a banquet for the visiting dignitary and his delegation at the Rashtrapati Bhawan. He will return on Wednesday morning.

Prime Minister Narendra Modi visited South Korea in 2015 during which the bilateral partnership was elevated to a special strategic partnership. Since then, the relationship has expanded in several areas.

Gangs of Jaunpur: Munna Bajrangi’s life and killing give a glimpse into UP crime and politics

Over 100 stranded people rescued near Mumbai