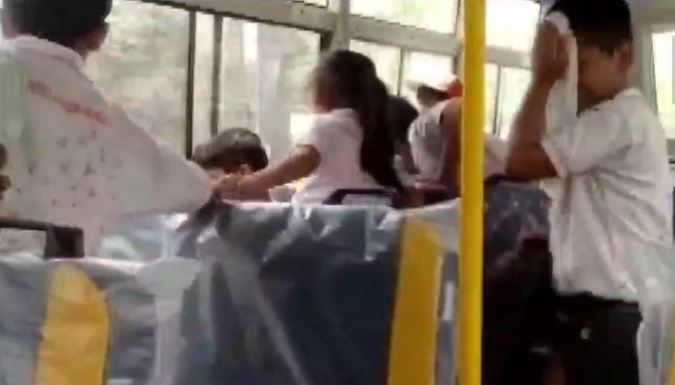 A school bus carrying children got stuck in a road blockade by Agnipath protesters in Darbhanga, Bihar. The Army job seekers are protesting against the Centre’s newly introduced Agnipath scheme all over the country and as the protest and touch down the third day, the visuals coming from all over the country is horrifying and scary.

While several trains have been set on fire this morning, a video shared by ANI on Twitter shows a school bus with children crying out of fear gets stuck amid the protest. The video shows teachers trying to pacify the children but the scenario does not seem to help. However, much later, the bus managed to escape the place with the help of the regional police.

The situation in Bihar is getting out of hand. The violent protests all over the state is clearly visible now. Where this morning Defence Minister Rajnath Singh said that the Agnipath scheme is a golden opportunity for youngsters to join Army, on the other hand, the Army job seekers are protesting against recruiting policy.

Protesters have even set the second BJP office on fire in Madhepura. Later in the day another BJP office in Nawada was set ablaze. And not just Bihar but other BJP ruling states like, UP, Haryana and MP have also protested against Agnipath scheme.

For the unversed, protesters are demanding a rollback of the short-term recruitment scheme. Youngsters believe that the four-year tenure is too short and they even fear over their job security and pension benefits.