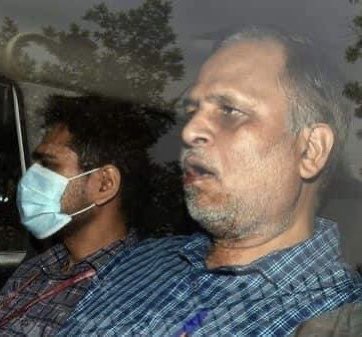 A picture of Delhi AAP minister Satyendar Jain, who is in the custody of the Enforcement Directorate (ED) is going viral on the internet. In the photo, blood can be seen on his face and it started raising eyebrows. Several people even questioned if he is being tortured.

Reacting to this, AAP chief Arvind Kejriwal said that Jain is in the ED custody and he cannot say much since they have no direct contact.

Delhi CM further said that he is in no position to make any comment on this. He was taken to hospital yesterday. Whatever happened in the hospital, when he was a little better, he was taken back.

The picture is now being widely shared on the internet. One of the users reacted to the picture and said that this is the man who gave Delhi mohalla clinics.

Another user, who is also a member of the Aam Aadmi Party (AAP), Vikas Yogi said that this is the man who made Mohalla clinics. He served people with honesty. God will teach BJP a lesson someday.

AAP leader Sanjay Singh said that he is the same man who gave Mohalla clinic model, made 5 flyovers in Delhi and even saved Rs 300 crore of Delhiites. He further said that this image of Satyendar Jain is a black mark on PM Modi and Enforcement Directorate (ED). He concluded by saying that the country will never forgive them.

AAP minister Satyendar Jain was arrested on May 30 by the ED over the alleged money-laundering case. His custody has also been extended and he will remain in custody till June 13.

Soon after Jain’s custody was extended, his lawyer claimed that the AAP minister was suffering from post-Covid sleep apnea and had to be sent to the hospital as he was not feeling fine.

Later, he was taken to hospital. His lawyer Rishikesh Kumar also told Delhi Court that sleep apnea was one of the problems that Satyendar Jain was facing since he recovered from coronavirus. Kumar also said that when Jain came out of court, he was not feeling well and was later sent to a hospital.

How Rajya Sabha elections are held? Who can vote? Why is it important? Here’s all you need to know

Pervez Musharraf is not dead but health critical, family clarifies