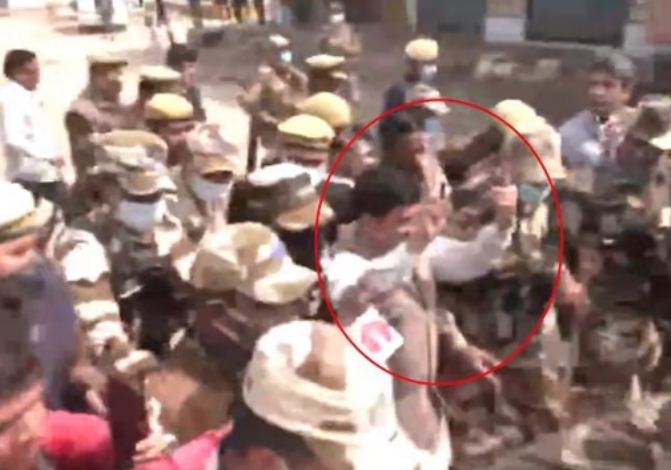 Amid heavy security, journalists tried a lot to ask him questions but he did not answer anyone and left the booth showing the victory sign.

The minister has rarely answered media questions on his murder-accused son Ashish Mishra. Earlier, he was also caught on camera attacking and abusing journalists.

Ashish Mishra, accused of running over farmers at Lakhimpur Kheri last year, had jailed in October after SIT probe. In the middle of the Uttar Pradesh election campaign, the court has granted him bail a week ago.

The minister Ajay Mishra, whose son is an accused of mowing down SUV on the protesting farmers in Lakhimpur, has a huge influence in eastern Uttar Pradesh, especially Lakhimpur.

Minister’s son was arrested in October for mowing down the car over protesting farmers who were marching against the minister’s visit for an event when the convoy crashed into them.

Both Mishra have denied that he was driving the SUV. In the incident, four farmers, two BJP workers and a journalist were died.

Polling is underway in Uttar Pradesh for the fourth round of seven-phase voting. The results will be declared on March 10.

The fate of 624 candidates including several cabinet ministers, sitting MLA from Rae Bareli Aditi Singh, as well as Unnao rape victim’s mother Asha Singh will be sealed in this round.

Nidhasan seat, one among 8 seats of Lakhimpur Kheri, is also the taste of Ajay Mishra Teni’s influence in the area because the BJP has not campaigned on this seat due to villagers anger on the Tikonia incident.

The focus will also be on Unnao where the Congress has fielded the Unnao rape victim’s mother to wrest the seat from BJP’s Pankaj Gupta.