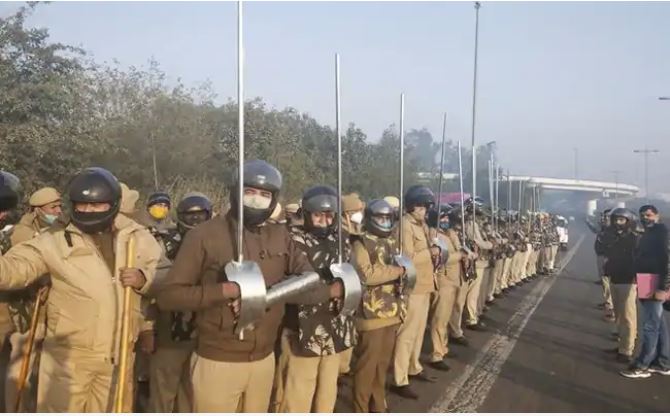 In its continuing attempt to weaken the farmers’ protest, the government has deployed massive security at the borders of Delhi, banned Internet around Delhi, blocked highways with new concrete barricades, barbed wire and metal spikes on roads, arrested journalists and TwitterIndia joined in by banning handles critical of the government. Reports also said the BSF, a force formed to protect the borders of the country, have also been stationed on the frontiers of the capital to support the Delhi Police against the farmers.

The Delhi Police has cemented nails on the streets and dug ditches across the arterial roads to prevent protesting farmers from entering Delhi. A photo of police personnel armed with metal swords/sticks and arm guards are making the rounds on social media.

In the viral image, the policemen are standing on the side of a road in Delhi with what appear to be metal gloves shielding their forearms. They are also wearing helmets and arm guards which look like gloves and are made of metal. The batons also have a shield to protect hands from assault. There was no official confirmation from Delhi Police on the details of the equipment.

Denying any formal orders to incorporate such metal armoury, Delhi Police clarified that the policemen in the images were from one part of Delhi and they took the initiative on their own. The officer said there was no formal order to equip forces with these weapons. Sources said the unit, which is from Shahdara, has been asked to explain its new “gear” and the need for it.

A local officer is said to have asked for these metal lathis without approval from senior officers and as soon as senior officers found out about them, they were taken back. There is no scheme to arm policemen with steel lathis.

In the past few days, more farmers have arrived in the capital along with their tractors to join protesting colleagues at the Delhi borders.

With the Budget Session on, Opposition MPs in the Rajya Sabha had their first opportunity in well over 5 months to demand a discussion on the protest by farmers. The House saw successive adjournments on Tuesday as the Congress, the DMK, the Trinamool Congress and the CPI (M) raised slogans against the farm laws. They then walked out of the Rajya Sabha. An adjournment notice was also moved in the Lok Sabha.

Aatmanirbharta is Oxford Hindi word of the year for 2020