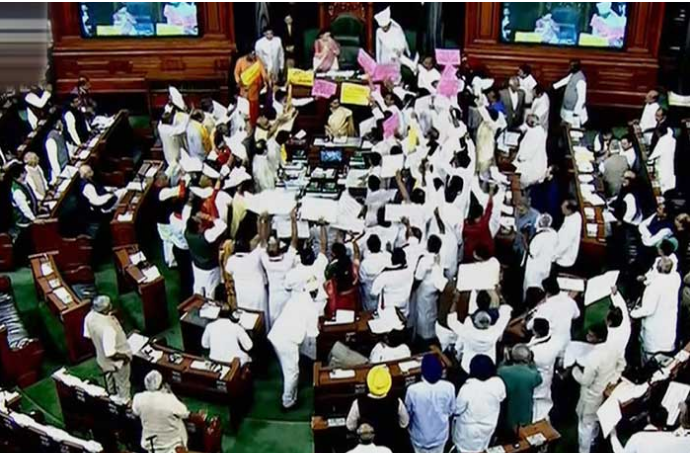 The ongoing monsoon session of Parliament on Monday witnessed stormy scenes after the opposition parties continued to target the Centre over various issues including the Pegasus project, Covid pandemic and the farmers agitation against the farm laws.

Both the Lok Sabha and the Rajya Sabha were adjourned multiple times amid opposition’s protest raising slogans and holding placards on the Pegasus snooping row and farmers’ issue.

Rajya Sabha resumed on Monday on the fifth day of the Monsoon session. However, soon after the resumption of House, the opposition parties created ruckus over the issue of the ‘Pegasus Project report. The agitated members demanded that the chair to allow the opposition to speak and forcing four adjournments.

Lok Sabha ran for nearly 30 minutes taking up some questions during the Question Hour when Speaker Om Birla adjourned the proceedings till 2 PM amid continuous disturbance. As soon as the House met, Om Birla paid tributes to the armed forces personnel for their valour and sacrifice during the 1999 Kargil War.

Chairman M. Venkaiah Naidu said the persistent disruptions by a few had cost many MPs their opportunity to raise issues of public importance. While the Opposition MPs continued their protests during Zero Hour, Naidu said important matters about Covid-19 vaccines, the alleged attacks on press freedom and even the chance to seek clarifications from the government on the Pegasus issue were denied due to the disruptions.

Naidu said 57 matters raised by 63 MPs had been permitted during the four sittings last week but none of them could be taken up due to the disruptions. On Monday, too, there were 12 matters admitted for Zero Hour.

When the House reconvened at noon, the Opposition protests continued, with a placard saying big brother is watching being held up in front of the chair.

The protests were continued at a time when the house were discussing the Marine Aids to Navigation Bill, 2021. Amid the protests, the House agreed to withdraw the Indecent Representation of Women (Prohibition) Amendment Bill, 2012 as moved by Women and Child Development Minister Smriti Irani.

Before the last adjournment for the day, Leader of the House Piyush Goyal said there was no consensus among parties to discuss important issues despite repeated requests.

Finance Minister Nirmala Sitharaman laid the papers pertaining to a notification on reduction of customs duties amid the din. Deputy Chairman Harivansh made repeated appeals to the protesting members to return to their seats and allow the Question Hour to be taken up.

BJP member Sasmit Patra, in the chair, asked the BJP leader Jugalsinh Mathurji Lokhandwala to continue the debate on The Marine Aids to Navigation Bill, 2021 but the opposition members did not give any heed to Patra’s request to maintain order in the House and go back to their seats.