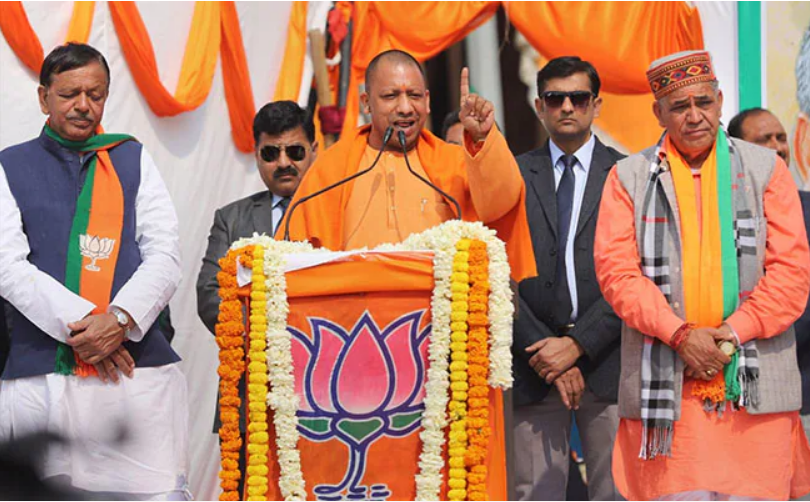 The Communists may have been reduced to Kerala but for Uttar Pradesh Chief Minister Yogi Adityanath, the ideology still poses a threat. In the last sitting of the Uttar Pradesh Assembly, the Chief Minister termed socialism as the biggest superstition. Socialism more or less equates with the Samajwadi Party or the Bahujan Samaj Party in his lexicon, if one can glance between the lines.

The antidote to communism and socialism, as is to be expected, is Ram Rajya, the CM said underlining the prime focus of the BJP’s possible Assembly campaign with the Ayodhya Ram temple work progressing at a good pace.

Claiming the socialist mantle from under Prime Minister Narendra Modi’s umbrella social welfare schemes, Yogi Adityanath spoke of the ills perpetrated in the garb of socialism.

At a FICCI meet, Union Home Minister Amit Shah said PM Modi has given a corruption-free government in the last 7 years. The Modi government has brought 60 crore people in step with the country’s development. This has helped increase their faith in democracy, Shah said.

Former Punjab Chief Minister Captain Amarinder Singh, who recently stepped down from his position and left the Congress, is now in talks with the BJP for the upcoming 2022 elections.

Former Uttarakhand CM Harish Rawat said the BJP won’t cross 60 seats in the state Assembly of 71 members. He said instead the BJP will be exiled by the people of the state. The current BJP government under Pushkar Singh Dhami has seen three CMs in the last five years. Rawat’s comment was in response to the BJP poll slogan ‘Abki baar 60 ke paar’.

Rawat noted people were unenthused at PM Narendra Modi’s rally in Uttarakhand while in Congress leader Rahul Gandhi’s rally people were total-josh. Rawat drew his inferences from the crowd behaviour but it remains to be seen who gets to do the victory lap this time round.

Not just Ram, Hanuman would also do. Samajwadi Party chief Akhilesh Yadav visited the Lord Hanuman temple near Lucknow-Rae Bareli to poach from across his party’s Muslim-Yadav traditional votebank.

Countering Yogi Adityanath’s UP No.1 claim, Yadav said those who claim they’ve made UP number 1 have actually taken it to the top rank in custodial deaths, hunger index, farmer suicides, in selling public enterprises and banks, and burying cows alive.

Yadav said Union Minister of State Ajay Kumar Mishra Teni should be suspended by the Union government following the SIT report in the Lakhimpur Kheri deaths.

On the other hand, Samajwadi Party leaders Shafiqurrahman Barq and ST Hasan added to possible fissile material against the party. On the proposal to increase the legal age for women to marry, Barq shot off a remark that such a plan will make women wayward. Now that the comment is turning viral, Barq will need some ultra-quick damage control.

With the Trinamool Congress poaching into the heart of its Goa party and the Aam Aadmi Party unleashing its utilitarian manifesto, the Congress released its first list of eight candidates for the forthcoming Assembly elections. Former chief minister Digambar Kamat will contest from Margao.

From Mapusa, Sudhir Kanolkar will contest, from Taleigao,  Tony Rodrigues, and Rajesh Verenkar from Ponda.

The other candidates declared are Sankalp Amonkar from Mormugao, Aleixo Reginaldo Lourenco from Curtorim, Yuri Alemao from Cuncolin, Altone D’ Costa from Quepem.

The contest for Goa will be four-cornered with the BJP, the Congress, the AAP and the new entrant based out of Calcutta.

XAT admit card 2022 to be released on THIS day, here’s how to download