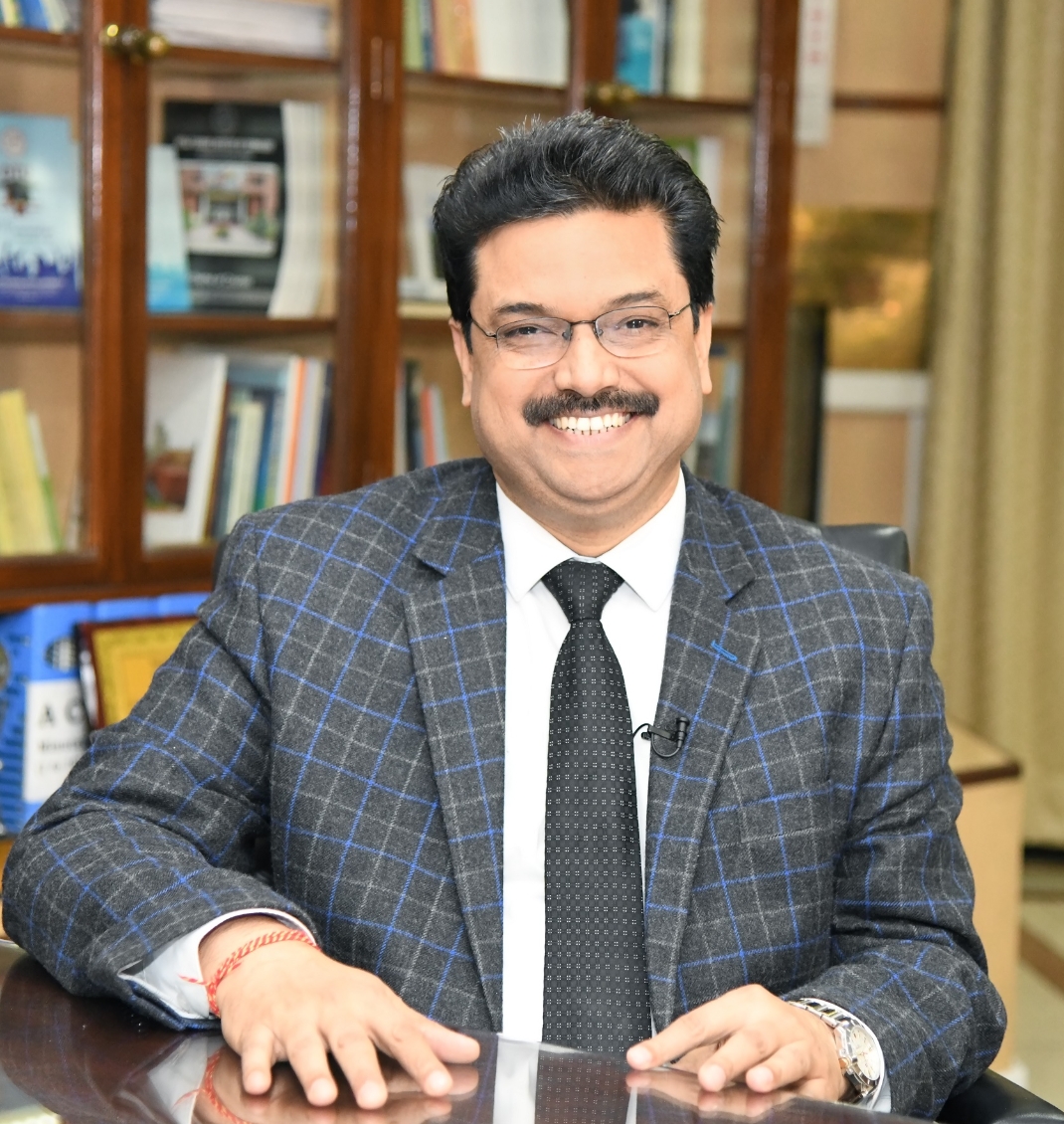 In association with the BALAJI Foundation, “Swadesh Conclave and Awards” is an innovative initiative of “APN News” that started in 2020. Initiated in 2020, the Swadesh Award salutes people, projects, and institutions that go the extra mile to make India a better nation.

Hon’ble Cabinet Ministers, State Ministers, Governors, Chief Ministers, and Eminent Speakers are invited to the conclave to share their vision of India.

APN News and India Legal editor-in-chief Rajshri Rai said the Swadesh Conclave and Awards are for everyone who has worked for the people of India. She added that the awardees are people who have worked for the 140 crore Indians.

DU to start course-based registration under NEP 2020 to allow students to choose subject of their own choice, says DU Vice Chancellor Yogesh Singh

Delhi University’s Vice-Chancellor Yogesh Singh said that DU is going to start course-based registration under the NEP 2020 which gives students the freedom to choose the subject of their own choice.

Singh said India will produce good students after the implementation of NEP 2020. The degree is just a piece of paper and your education is seen in your behavior, he added.

BJP minister Shahnawaz Hussain said Bihar has a different image in the eyes of every individual.

Earlier, he said that Bihar was a soft target for the film producer. He also alleged that Bollywood had shown a bad image of Bihar through movies like Apharan and Gangajal. But today’s Bihar is Super 30 and not Apharan Bihar, he said.

Hussain also urged the people of the country to invest in Bihar to cut the transportation cost. The time of Lantern will never come back again in Bihar because the state is smoothly running under the leadership of Prime Minister Narendra Modi, he added.

Union Minister Ramdas Athawale said Amrit Mahotsav does not belong to the government but to 134 crore Indian citizens. He urges everyone to participate in the mega festival of Har Ghar Tiranga.

Union Minister S.P. Baghel said media should stay within its Lakshman Rekha as the BJP government is not against elites because it has given room to oppressed communities for progress. Modi’s government has appointed an ST woman appointed as the president of India which indicates the seriousness of the ruling government, he said.

Baghel further said PMAY has given homes to the poor who had to share living space with their livestock. The availability of toilets in rural areas led to a decrease in the incidents of rape, he added.

Union Minister Ashwini Chaubey called Swadeshi (made in India) and Swablambi (self-reliance) the path of PM Modi’s Atmanirbhar Bharat. He said leadership is the key for a nation to become a role model for the rest of the world. The visionary leadership of PM Modi has made us feel proud of our nation, he added.

Chaubey said The 21st century is India’s century. India will be Vishwaguru and take the world forward under the leadership of Prime Minister Narendra Modi, he added.

Union Minister Jitendra Singh said India needs to look back at the last 25 years to think about the vision for the upcoming 25 years. India will emerge as the world leader in 2047, he said.

He said the government has not implemented new rules but scrapped old useless laws which were running for decades. In 8 years of the Modi government, every governance model turned out to be social reform. 1600 rules have been scrapped in the last 8 years under the leadership of Prime Minister Narendra Modi, he added.

PM Modi has opened up areas to the youth of this country. He has the capacity to break taboos of the past, he said.

The government is focusing on skill sets and sports in the NEP 2020, said Union Minister Anurag Thakur. NEP will be implemented after 34 years, he added.

The Minister said nobody was talking about Kashmir during UPA in the Parliament. He had started the Yuva Sangharsh yatra from Calcutta to Kashmir in the memory of Syama Prasad Mukherjee, he added.

He further said there is not even a single incident of violence in Kashmir after the abrogation of Article 370 where the stone pelting was normal.

Union Minister of Sports, Youth Affairs, and Minister of Information and Broadcasting Anurag Thakur in a conclave said 75 years of independence is very important.

Har Ghar Tiranga is for everyone to buy and hoist flags at their homes. He also asked people to buy flags and not wait for someone to offer them one, he added. At the end of the conclave everyone will put tiranga as their DP, he said.

Thakur further said that it is not about just putting a flag at your home but tiranga has the power to strengthen the unity of the country.

Nitin Gadkari threw light on the existence of two nations in India. He said that one is the rural agricultural India and the other is Urban India and to bring unity in this diversity, the need of the hour is to unite India and Bharat in order to movie ahead.

Swadesh Conclave & Awards program has commenced and Union Ministers Anurag Thakur and Nitin Gadkari’s talks were the highlight of the event.

Nitin Gadkari threw light on the existence of two nations in India. He said that one is the rural agricultural India and the other is Urban India and to bring unity in this diversity, the need of the hour is to unite India and Bharat in order to movie ahead.

Gadkari also spoke about the Swadeshi Vicharadhara, and said that its based in 3 points – Ethics, Economy and Rasthravaad. And in order to become the world’s biggest economy, we need to focus on our basis, which is – jal (water), jangal (forests), jameen (land) and janwar (animals).

The Minister for Road Transport & Highways also shared his views on the current agricultural practices in India. He said that India needs to change crop pattern to defeat the world. He applauded the current government for its policies to help the farmers and said that todays’ farmers have not only become an Annyadaata but also Urjadaata under the leadership of Prime Minister Narendra Modi.

Making a comment on the UP-Bihar agriculture, Nitin Gadkari said, the people of rural India have forcefully migrated to urban India. And UP’s rural economy is dependent on sugarcane and has started the production ethanol like Bihar. Ethanol is made up of sugarcane and hydrogen is the future fuel.

He further added that after hydrogen fuel, the vehicle will provide an average of 450 km in just Rs 80, which will add in the development of the country.

Nitin Gadkari ended his talk at the Swadesh Conclave 2022 by saying that India is working on 26 green highways that will reduce the journey time from 4 to 6 hours. He even added that India is moving to green energy to become carbon neutral India and hence, it’s safe to say that India’s software engineers are best in the world.

Swadesh Conclave: Anurag Thakur speaks about the importance of 75 years of independence 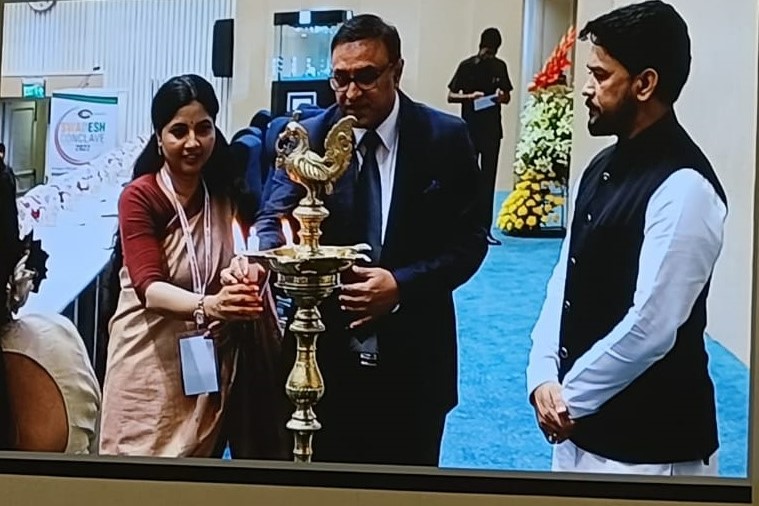 The Union Minister Anurag Thakur is present at the Swadesh Conclave 2022 as one of the speakers and while addressing the audience, he spoke about the importance of independence and also enlighten people about the Har Ghar Tiranga campaign.

Union Minister Anurag Thakur requested everyone to upload Tiranga as their new display picture on various social media profiles and also said that the Indian flag is for everyone to buy and hoist at their homes. He also asked everyone to buy a Tiranga and not wait for someone to offer you one.

Anurag Thakur believes that by doing so we can strengthen the national unity and give power to the Indian diversity.

This 15 August, India will complete their 75years of Independence and with the theme of ‘Nation First, Always First’, the Indian government is celebrating the Azadi Ka Amrit Mahotsav program. And while talking about the same Union Minister Anurag Thakur urged the people to talk about the unsung heroes of our country who were the eyewitnesses of the freedom struggle.

“If you find someone like this in your building or flat, talk to them and request them to share his/her journey on social media,” Thakur said. And before taking the questions, Anurag Thakur added that everyone should contribute at least something in Azadi Ka Amrit Mahotsav on 15 August 2022.