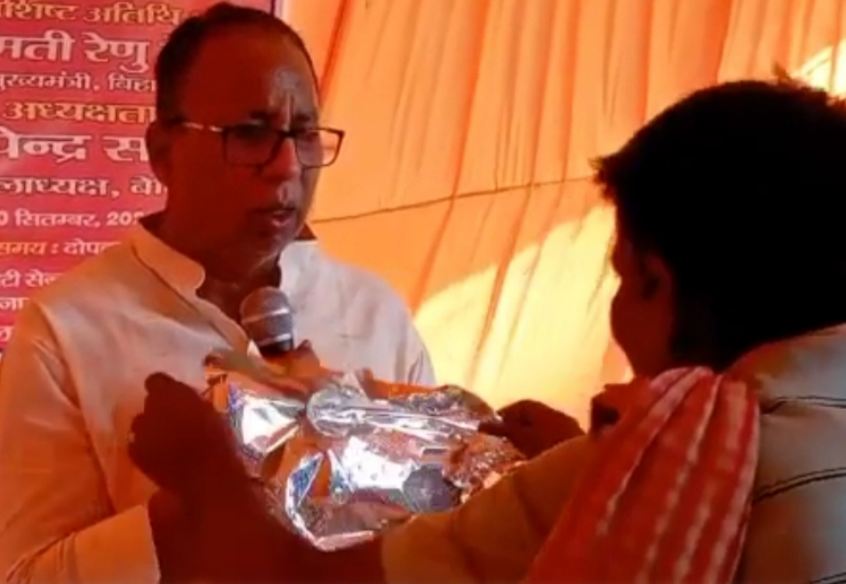 A video of the incident is doing rounds on social media. In the video, the drunk man can be seen giving plastic polythene to Jaiswal.

The video also shows the BJP workers caught the drunkard and drove him out.

The audience was surprised to see this. After this, the employees caught the drunkard and drove him out.

After this, the BJP leader directed the employees and the employees took him off the stage. He took a jibe at Chief Minister Nitish Kumar and said Ehi se Nitish ji ke hum kahani liquor bani khol deve ke.

After this assertion of the BJP state president and the people, who were present at the event, began laughing and laughing.

The BJP leader told the reporters at his residence that the raiding team in Hajipur arrests the doctor running the liquor factory and he escapes from the custody of the police.

Speaking on sand mining and firing in Bihar, he said that such incidents are happening in every district of Bihar. The game of liquor and sand is going on under the umbrella of the police.

Jaiswal also accused the police that the accused doctor, who ran a liquor factory in Hajipur, was driven away with money, while firing continued in Bihar and the local police could not do anything.

Gujarat man gets stuck under an elephant statue at a temple, video goes viral | Watch 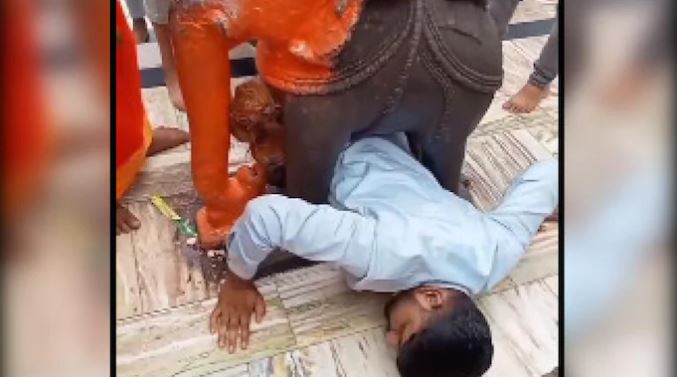 A strange incident has been reported from Gujarat, where a man got stuck under big elephant statue in a temple while offering resecting to it. The report says he was performing a ritual when the incident took place. A viral of him also went viral on all the social media platforms where he was seen struggling hard to get out of it.

An internet user named Nitin shared the viral clip on Twitter. He also captioned his post where he wrote that any kind of excessive bhakti is injurious to health.

The video starts with a man who can be seen lying under a big elephant statue, struggling to pass through it by forcing his both hands and legs. However, after spending minutes doing so, he failed. As the video moves further, it shows several people surrounding him trying to help him to get out. The clip also showed a priest in a safron shawl helping him to move ahead but unfortunately, nothing works.

Later, it has been reported that after a few hours, he got out with the help of the crowd.

Ever since the video was shared on the internet, it has gained a lot of views and likes in no time. Many internet users were also bombarded in the comment section in order to share their views about the incident.

One of the users commented that the clip has been generated from Narmada Mandir, Amarkantak MP. The user further wrote that people only get stuck there only if they committed many sins in their lives. Another user wrote that as per the old beliefs you pass through you are a good man otherwise you will be stuck. While the third user asked people to share the link to the full video in the comment section.