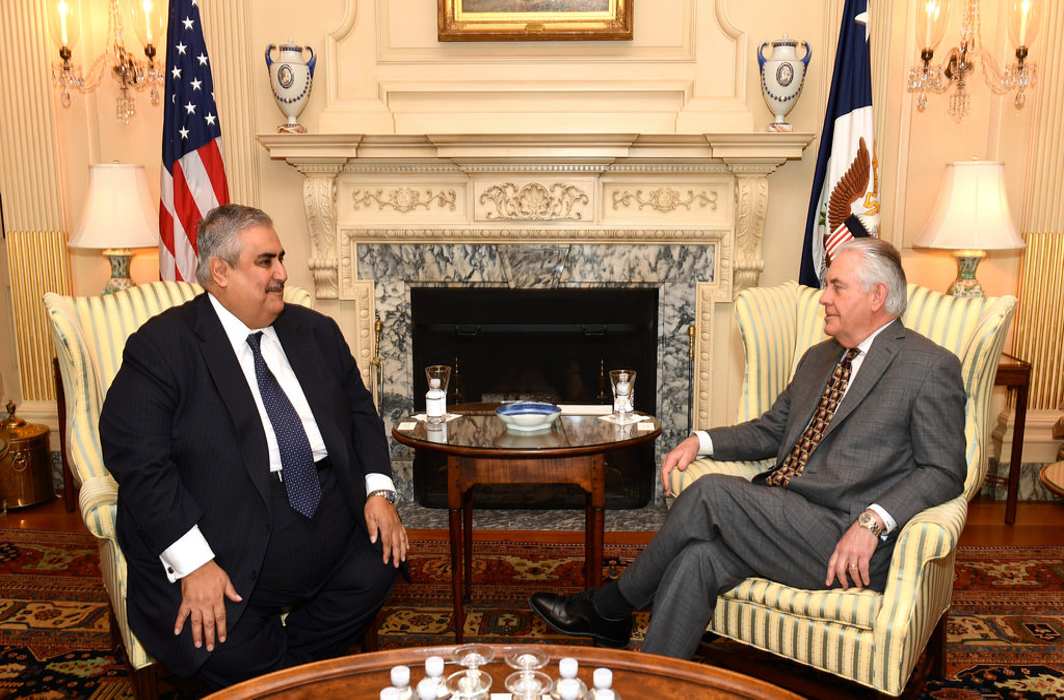 [vc_row][vc_column][vc_column_text]At a time when most of the countries were preparing to vote against Trump’s Jerusalem move at UN General Assembly in New York on Thursday, Bahrain’s foreign minister has said it is unhelpful to “pick a fight” with the US over “side issues”, while there is a threat from Iran.

On Wednesday, Khalid al-Khalifa posted a message to his thousands of followers saying, “It’s not helpful to pick a fight with the USA over side issues while we together fight the clear and present danger of The Theo-Fascist Islamic republic.”[/vc_column_text][vc_raw_html]JTNDYmxvY2txdW90ZSUyMGNsYXNzJTNEJTIydHdpdHRlci10d2VldCUyMiUyMGRhdGEtbGFuZyUzRCUyMmVuJTIyJTNFJTNDcCUyMGxhbmclM0QlMjJlbiUyMiUyMGRpciUzRCUyMmx0ciUyMiUzRUl0JUUyJTgwJTk5cyUyMG5vdCUyMGhlbHBmdWwlMjB0byUyMHBpY2slMjBhJTIwZmlnaHQlMjB3aXRoJTIwdGhlJTIwVVNBJTIwb3ZlciUyMHNpZGUlMjBpc3N1ZXMlMjB3aGlsZSUyMHdlJTIwdG9nZXRoZXIlMjBmaWdodCUyMHRoZSUyMGNsZWFyJTIwYW5kJTIwcHJlc2VudCUyMGRhbmdlciUyMG9mJTIwVGhlJTIwVGhlby1GYXNjaXN0JTIwSXNsYW1pYyUyMHJlcHVibGljJTNDJTJGcCUzRSUyNm1kYXNoJTNCJTIwJUQ4JUFFJUQ4JUE3JUQ5JTg0JUQ4JUFGJTIwJUQ4JUE4JUQ5JTg2JTIwJUUyJTgwJThGJUQ4JUEzJUQ4JUFEJUQ5JTg1JUQ4JUFGJTIwJTI4JTQwa2hhbGlkYWxraGFsaWZhJTI5JTIwJTNDYSUyMGhyZWYlM0QlMjJodHRwcyUzQSUyRiUyRnR3aXR0ZXIuY29tJTJGa2hhbGlkYWxraGFsaWZhJTJGc3RhdHVzJTJGOTQzNDk5NTE3Nzg5MjE2NzY4JTNGcmVmX3NyYyUzRHR3c3JjJTI1NUV0ZnclMjIlM0VEZWNlbWJlciUyMDIwJTJDJTIwMjAxNyUzQyUyRmElM0UlM0MlMkZibG9ja3F1b3RlJTNFJTBBJTNDc2NyaXB0JTIwYXN5bmMlMjBzcmMlM0QlMjJodHRwcyUzQSUyRiUyRnBsYXRmb3JtLnR3aXR0ZXIuY29tJTJGd2lkZ2V0cy5qcyUyMiUyMGNoYXJzZXQlM0QlMjJ1dGYtOCUyMiUzRSUzQyUyRnNjcmlwdCUzRSUwQQ==[/vc_raw_html][vc_column_text]Bahrain is among the four countries severing their ties with Qatar in June this year under Saudi Arabia’s leadership. Other countries were UAE and Egypt. Forces from Saudi Arabia, Kuwait and UAE have been assisting Bahraini authorities in crushing the majority Shia opposition. Bahrain alleges Iran for its support to the opposition parties.

Saudi Arabia, UAE, Bahrain and Egypt were on the same page with Israel as far as their animosity with is Iran is concerned. Most of the GCC countries consider Iran as a threat to their security.

On December 6, US President Donald Trump had recognised Jerusalem as Israeli capital and ordered to start process of shifting their embassy from Tel Aviv to Jerusalem.

The Arab League, Organisation of Islamic Conference (OIC) and most of the governments of the world have criticised Trump for his Jerusalem move while world-wide protest demonstrations were continuing.

The Bahrain foreign minister’s tweet was posted in English language meant for the outside world. A  Bahraini delegation has also visited Israel after Trump’s announcement.

Pakistan tries to “save face” on its India policy