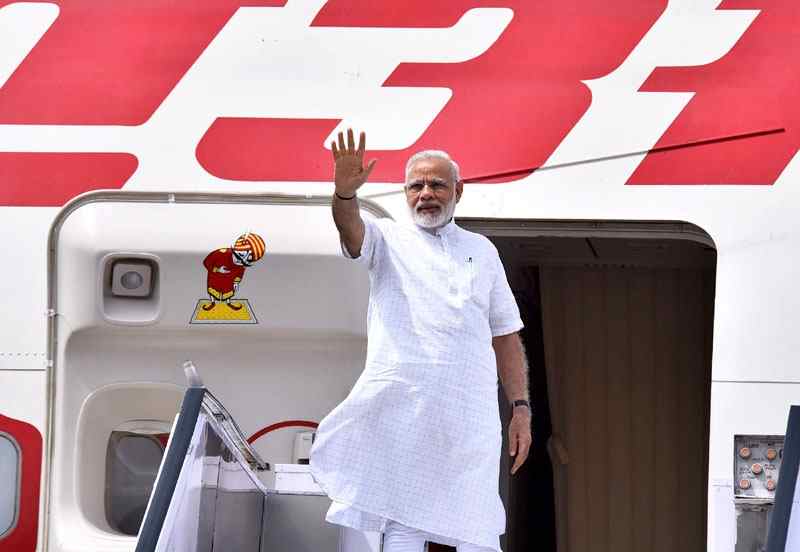 Prime Minister Narendra Modi left for his three-day visit to Israel Tuesday morning, being the first Indian PM to land in that country. His Israeli counterpart Benjamin Netanyahu and his senior ministers and large number of dignitaries will receive him at Tel Aviv airport, the rare honor given to Pope and the US President.

At the end of his Israel visit, PM is scheduled to visit Hamburg in Germany from June 6 to 8 for attending G-20 Summit.

In a series of Facebook posts, Prime Minister said “I will be visiting Israel on 4-6 July, 2017 upon invitation of Prime Minister Benjamin Netanyahu. As the first Prime Minister to do so, I am greatly looking forward to this unprecedented visit that will bring two countries and people closer. This year India and Israel are marking 25 years of our diplomatic relations.”

While describing his priorities during the visit Prime Minister said, “I will have in-depth talks with Prime Minister Netanyahu on the full spectrum of our partnership and strengthening it in diverse fields for mutual benefit. We will also have the chance to discuss major common challenges like terrorism.”

He said, “I will visit the Yad Vashem memorial Museum to honor the memory of the victims of the holocaust that counts among the greatest tragedies in human history. Later, I will also pay my respects to the courageous Indian soldiers who laid down their lives during the liberation of Haifa in 1918.”

In one of his tweets PM expressed his enthusiasm for meeting his Israeli counterpart.[/vc_column_text][vc_raw_html]JTNDYmxvY2txdW90ZSUyMGNsYXNzJTNEJTIydHdpdHRlci10d2VldCUyMiUyMGRhdGEtbGFuZyUzRCUyMmVuJTIyJTNFJTNDcCUyMGxhbmclM0QlMjJlbiUyMiUyMGRpciUzRCUyMmx0ciUyMiUzRUklMjBsb29rJTIwZm9yd2FyZCUyMHRvJTIwaG9sZGluZyUyMGV4dGVuc2l2ZSUyMHRhbGtzJTIwd2l0aCUyMG15JTIwZnJpZW5kJTJDJTIwJTNDYSUyMGhyZWYlM0QlMjJodHRwcyUzQSUyRiUyRnR3aXR0ZXIuY29tJTJGSXNyYWVsaVBNJTIyJTNFJTQwSXNyYWVsaVBNJTNDJTJGYSUzRSUyMCUzQ2ElMjBocmVmJTNEJTIyaHR0cHMlM0ElMkYlMkZ0d2l0dGVyLmNvbSUyRm5ldGFueWFodSUyMiUzRSU0MG5ldGFueWFodSUzQyUyRmElM0UlMkMlMjB3aG8lMjBzaGFyZXMlMjBhJTIwY29tbWl0bWVudCUyMGZvciUyMHZpYnJhbnQlMjBJbmRpYS1Jc3JhZWwlMjB0aWVzLiUzQyUyRnAlM0UlMjZtZGFzaCUzQiUyME5hcmVuZHJhJTIwTW9kaSUyMCUyOCU0MG5hcmVuZHJhbW9kaSUyOSUyMCUzQ2ElMjBocmVmJTNEJTIyaHR0cHMlM0ElMkYlMkZ0d2l0dGVyLmNvbSUyRm5hcmVuZHJhbW9kaSUyRnN0YXR1cyUyRjg4MTg1MTQ5NDA2Mzk0MzY4NCUyMiUzRUp1bHklMjAzJTJDJTIwMjAxNyUzQyUyRmElM0UlM0MlMkZibG9ja3F1b3RlJTNFJTBBJTNDc2NyaXB0JTIwYXN5bmMlMjBzcmMlM0QlMjIlMkYlMkZwbGF0Zm9ybS50d2l0dGVyLmNvbSUyRndpZGdldHMuanMlMjIlMjBjaGFyc2V0JTNEJTIydXRmLTglMjIlM0UlM0MlMkZzY3JpcHQlM0U=[/vc_raw_html][/vc_column][/vc_row][vc_row][vc_column][vc_column_text]Before the arrival of PM Modi in Tel Aviv, Israel on Monday backed India on the issue of terror threat from Pakistan.  Mark Sofer, Deputy Director General in-charge of the Asia Pacific Division at Israeli foreign office told an Indian journalist on Monday, “Israel supports India on terrorism emanating out of Pakistan, hook, line and sinker. But we are not asking quid pro quo… the horrors coming from Pakistan…the Lashkar-e-Toiba, the rogue operations from Pakistan. We say India has the right to defend itself, just like Israel has right to defend itself. I don’t see difference between LeT and Hamas. A terrorist is a terrorist is a terrorist.”

The Israeli officials described Modi’s visit as “historic and special”. According to sources the groundwork was prepared by “seven pre-visits” from different ministries and departments from India.

While discussing about Modi skipping visit to Palestinian territory, the Israeli official was quoted as saying there was “nothing sinister or special” about this. “Israel has de-hyphenated its relationship… and PM Modi’s visit is a bilateral visit”, he added.

Haaretz, an important Israeli newspaper, while discussing PM’s visit on Tuesday, analyzed as to how relations passed through different phases between the two countries. It said that the two leaders would mark a significant warming up of ties and express fulfillment of a long unrequited desire, dating back to the early days of the Jewish state, for close ties with, and recognition from, India.

Discussing the historical perspective, the daily said, “In those early days, David Ben-Gurion (primary founder and the first PM of Israel) and other key Zionist leaders made strenuous bids for political and diplomatic support from Indian nationalist leaders like Mahatma Gandhi and Jawaharlal Nehru.”

Referring to Albert Einstein’s letter to Jawaharlal Nehru pleading to establish ties with Israel written in the summer of 1947, the daily said, “But not even Einstein could convince Nehru. India voted against the UN partition plan of Mandate Palestine in 1947 and later, in 1950, extended recognition to the state of Israel but without establishing diplomatic relations.” In fact Ben-Gurion asked Albert Einstein to write letter to Nehru at that time.

Complaining about India’s attitude those days, the newspaper said, “In the absence of any ideological or diplomatic support from Gandhi for Zionism, or later from the Indian Republic for Israel, it was an unusual and difficult affection for Ben-Gurion to carry – much like a one-sided love affair.”

Haaretz further said that, “Self-determination for the Palestinian people was significant issue for Nehru, who gave them strong support and turned away from relations with Israel. There was a regional political consideration for India in the 1950s: the Kashmir dispute with Pakistan. India hoped for Arab support for the Indian case against Pakistan by extending its strong support to the Palestinians and not towards Israel.”

Discussing about the reasons for changed India’s policy towards Israel, the daily said, “First, the end of the Cold War and the collapse of Soviet Union created a new diplomatic matrix for India. Indian foreign policy was revised. Second, Israel was an excellent source of armaments and defense systems just as the Soviet Union and its associated weapons industries were crumbling. India’s poor military capabilities played a crucial role in opening relations with Israel.”

The daily revealed that during 1962 war with China, Nehru himself wrote a letter to Ben-Gurion asking for help in November that year.

While concluding its analysis, the daily said, “And India’s governing party, the Bharatiya Janata Party, a long time advocate of Israel in the Indian political system, is likely to anchor India’s ties with Israel with even great alacrity. That would indeed be a realization of Ben-Gurion’s long-held but frustrated hopes of decades ago.”