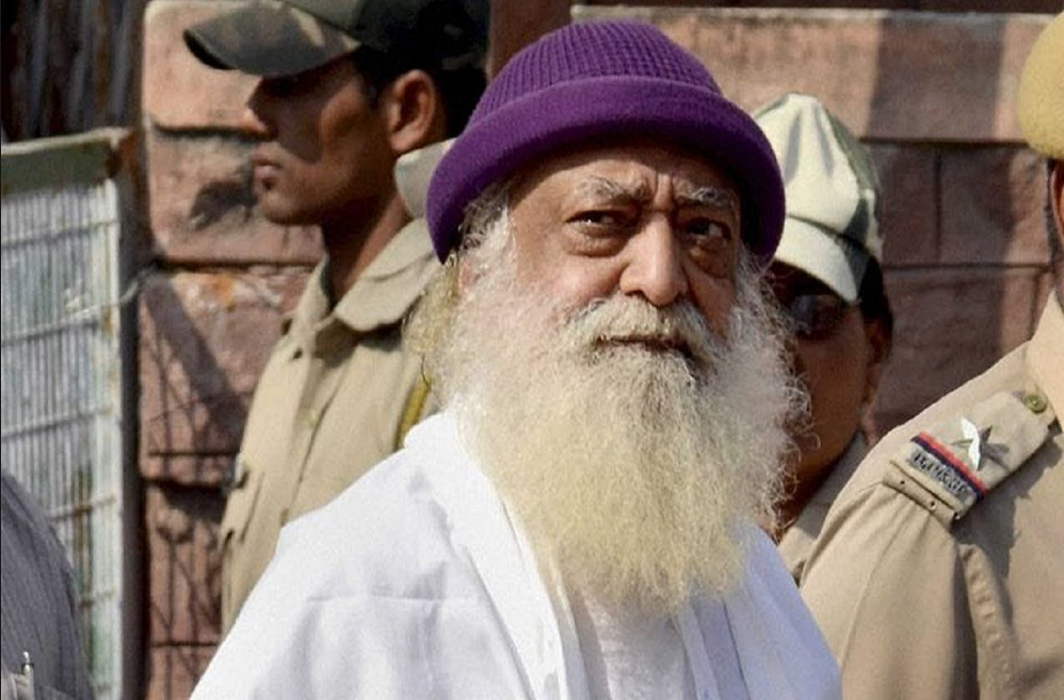 A Jodhpur court today sentenced self-styled godman Asaram to life in prison and two of his accomplices to 20 years jail for raping a 16-year-old girl in his ashram near Jodhpur five years ago.

The girl from Shahajahanpur in Uttar Pradesh was studying at the godman’s ashram at Chhindwara in Madhya Pradesh. The victim had alleged that Asaram called her to his ashram in Manai area near Jodhpur and raped her on the night of August 15, 2013.

On August 20, the parents of the victim filed a complaint in Delhi and later the case was transferred to Jodhpur police.

The chargesheet against Asaram and four other co-accused Shiva, Shilpi, Sharad and Prakash was filed by the police on November 6, 2013 under various sections of the POSCO Act, Juvenile Justice Act and IPC.

The 77-year-old Asaram was arrested in Indore and brought to Jodhpur on September 1, 2013. He is under judicial custody since September 2, 2013. Asaram unsuccessfully moved 12 bail applications, of which six were rejected by the trial court, three by the Rajasthan high court and three by the Supreme Court.

Final arguments in the Asaram case were completed on April 7 and the court had kept the order reserved for April 25.

Arguments for the quantum of sentencing were going on inside the heavily fortified jail premises, where the trial court delivered its verdict in accordance with the directions of the Rajasthan High Court.

Asaram is also facing a rape case in Surat in Gujarat in which the Supreme Court earlier this month gave five weeks time to the prosecution to complete the trial. This case relates to the complaint of rape filed by two sisters from Surat on October 6, 2013 against Asaram and his son Narayan Sai. Apart from rape, he was also facing charges of murder, black magic, to name a few.

The elder sister, in her complaint against Asaram, had accused him of repeated sexual assaults between 2001 and 2006 when she was staying at his ashram near Ahmedabad.

“We had complete faith in the judiciary and are happy that we got justice,” her father told journalists after the verdict came in. The family, he said, had been living in constant terror and their business was hit.

Asaram had started off from a hut on the banks of the Sabarmati and went on to create a Rs 10,000 crore empire with 400 ashrams in India and other parts of the world in four decades.

Apprehending trouble from Asaram’s followers, security was stepped up in Jodhpur where prohibitory orders were imposed ahead of the verdict. The Centre had asked Rajasthan, Gujarat and Haryana governments to tighten security and deploy additional forces as the three states have a large number of Asaram followers.

The Union Home Ministry had sent an advisory fearing a repeat of the violence in Punjab and Haryana that followed the conviction of Gurmeet Ram Rahim in August last year, when 13 people were killed. He was convicted in a 2002 rape case and sentenced to 20 years in prison.

Ashok Gehlot (Congress): The time has come when people should be able to differentiate between the actual saints and the frauds, as this creates a bad image of the country in the international arena.

Father of Shahjahanpur victim: Asaram is convicted, we have got justice. I want to thank everyone who supported us in this fight. Now I hope he will get strict punishment. I also hope the witnesses who were murdered or kidnapped get justice.

Neelam Dubey (Spokesperson for Asaram): We will discuss with our legal team and then decide our future course of action. We have confidence in our judiciary.

Former IPS officer and an acquitted accused in the Sohrabuddin case, DG Vanzara came out in support of rape convict Asaram. “There is no charge of rape. The charge is that he inappropriately touched the victim. I am a follower of Asaram,” said Vanzara.

Mahendra Chawla (main eyewitness in the Asaram’s son Narayan Sai’s sexual assault case): Though I have security, I request the Centre for additional security, my life, like other witnesses’, is constantly under threat.