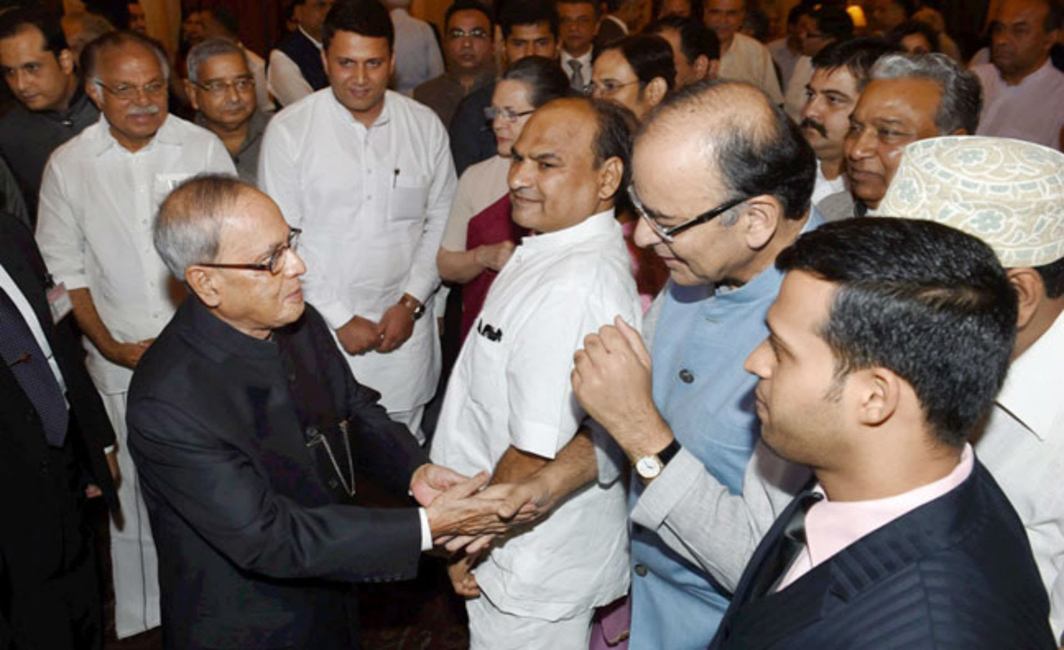 For quite some time, many believed that holding Iftar parties by was a way to endear or appease the Muslims. Hosting Makar Sankranti, Diwali or Holi never gave rise to such notions. Besides, iftar party is an annual affair even at the White House in US.

BJP, the flagbearers of opposition to “appeasement of minorities”, seems to have decided to put an end to it. This reached a high point yesterday, the last Friday of Ramzan before Eid: none of the ministers of Modi government went for the Iftar hosted by outgoing President of India Pranab Mukherjee at Rashtrapati Bhavan.

This was the last iftar the President hosted before his term ends next month.

In their non-attendance, Modi’s ministers have followed his example. If this was intended to send out a message, it succeeded.

Modi has stayed away from the presidential iftar party ever since he became Prime Minister. Ministers like Rajnath Singh and Arun Jaitley attended it on previous occasions, but chose to avoid it this time. Minority Affairs Minister Mukhtar Naqvi also did not turn up, later claiming he could not could not attend the iftar party because of a hurriedly called meeting of the Cabinet Committee on Political Affairs which went on till 8 pm and could not be avoided as the PM was going abroad the next morning.

Rashtrapati Bhavan had made seating arrangements with ministers in mind: Minister of State for External Affairs MJ Akbar was to share a table with Rajya Sabha Leader of Opposition Ghulam Nabi Azad. Rashtrapati Bhavan invites all members of the Union Council of Ministers to the iftar.

Opposition leaders, including Congress president Sonia Gandhi and Leader of Opposition in Rajya Sabha, Ghulam Nabi Azad were present at the event. “There was not a single minister, not a single government representative and not a single BJP leader. In all these years, I have never been to an iftar hosted by the President where there has been no representative of the Government of India,” CPM general secretary Sitaram Yechury told The Indian Express.

Modi’s entire ministry not going to an Iftar party, that too by the President of India, is going a step ahead – or backward. After becoming PM, Modi started by breaking a long standing convention of holding iftar party at 7 Race Course Road, the residence of the Prime Minister. The previous BJP PM, Atal Bihari Vajpayee’s iftar parties were grand affairs.

BJP’s other Hindutva icon to be elevated to the position of head of government, UP Chief Minister Yogi Adityanath, has also ignored iftar parties. He skipped an Iftar party hosted by governor Ram Naik at Raj Bhawan in Lucknow on Friday and, unlike his predecessors but like Modi, did not host one either.

He had, however, organised ceremonies like ‘kanya poojan’ and hosted ‘falahari’ feast at the chief minister’s residence during the ‘Navratri’ fasting. Yogi is also the Mahant, or head priest, of the Gorakhnath temple. Other BJP chief ministers, Rajnath Singh and Kalyan Singh, had hosted iftar parties during their tenure.

In Uttar Pradesh it was, in fact, the RSS Muslim wing – Rashtriya Muslim Morcha, that held an iftar this Ramzan period, in their own way, serving cow milk and extolling its health benefits over beef – as if Muslims in the State regularly and routinely consume beef.[/vc_column_text][/vc_column][/vc_row]

PM leaves for Portugal, US and Netherlands trip