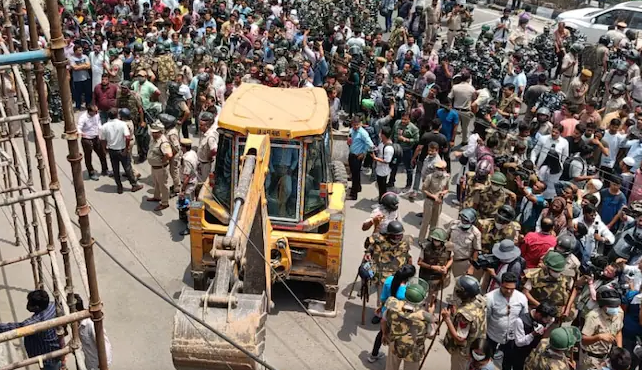 The Supreme Court on Thursday asked the Uttar Pradesh government to file a response on pleas by Jamiat-Ulama-I-Hind and others seeking the direction of Uttar Pradesh authorities to ensure that no further demolitions of properties are carried out in the state without following due process.

The apex court also asked the Uttar Pradesh government to file an affidavit in 3 days.

The bench was headed by Justice AS Bopanna and Justice Vikram Nath. They will hear the matter next Tuesday that is June 21, 2022.

Senior advocate C U Singh and advocate Nithya Ramakrishnan for Jamiat-Ulama-I-Hind told the top court that the UP CM had warned of retaliatory demolitions using bulldozers and officials carried out the threat by demolishing houses of riot accused without serving notice as required under the law.

Justices A S Bopanna and Vikram Nath said the process of law must be followed for the demolition of alleged unauthorised structures and that there must be a sense among citizens that the rule of law prevails in the country.

The Bench also said that they can’t stay the demolition but they can ask for the same to be done in accordance with the law.

The court said that the government would get time to file its objections. We should ensure their (petitioners’) safety in the meantime. They are also part of society. When someone has a grievance, they have a right to have it addressed. Such demolitions can only happen as per law. They will hear the case next week.

As the violence erupted in Uttar Pradesh over the remarks of former BJp leader Nupur Sharma on Prophet Muhammad, the Saharanpur police on Saturday shared videos on social media of bulldozers demolishing parts of the homes of the two accused who were arrested for disturbing the peace and social harmony.

Saharanpur SSP Akash Tomar said that a joint team of Saharanpur administration, development authority, magistracy, revenue team, municipal corporation and police was made to take action on the illegal properties of the accused in the violence.