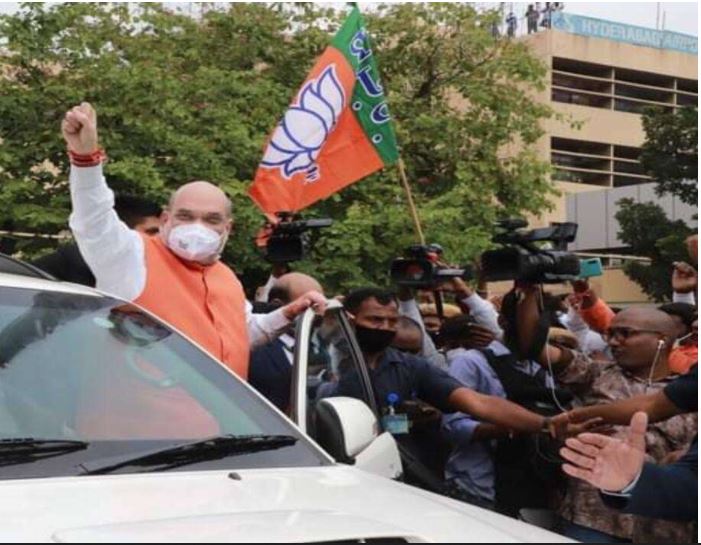 A day after the SP-RLD’s joint conference in Muzaffarnagar, Union Home Minister Amit Shah is in the jat dominated region of western Uttar Pradesh today for giving a push to the BJPs high-voltage campaign for the next month’s assembly elections.

Addressing poll rally in Muzaffarnagar, Shah said Akhilesh Yadav and Jayant Chaudhary are together till counting of votes in Uttar Pradesh. If the Samajwadi Party wins, then Azam Khan will be in their government and Jayant Bhai will be out. And their candidates’ list can say what will happen after elections, he said.

Home Minister’s statement comes a day after Yadav and Chaudhary remembered the legacy of jat leader Chaudhary Charan Singh in a joint press conference organised by the Samajwadi Party and the Rashtriya Lok Dal.

In his speech, Shah also challenged Akhilesh Yadav that today, he has come here to give BJPs figures in a public programme, if the SP have the courage, declare their figures in a press conference tomorrow. Akhilesh babu is not even ashamed while saying that the law and order situation is not good in UP, he said.

The Home Minister also said that the pain of riots is still fresh. The victims were made accused and the accused were made victims during the 2013 riots in Muzaffarnagar. But after came in 2017, goons have gone out of the border of Uttar Pradesh.

The SP-RLD alliance, which has formed in the backdrop of farmers protest, is posing a big threat to the BJP in the region where the BJP had won 83 out of the 108 seats. It means, with an strike rate of 76%, the BJP had won 3 out of every four seats in the jat dominated region.

The SP-RLD alliance is hoping that the Jat-Muslim, who had parted ways after the 2013 communal riots Muzaffarnagar, will vote against the BJP who had not only bolstered the BJP’s impressive victory in the 2017 due to riots.