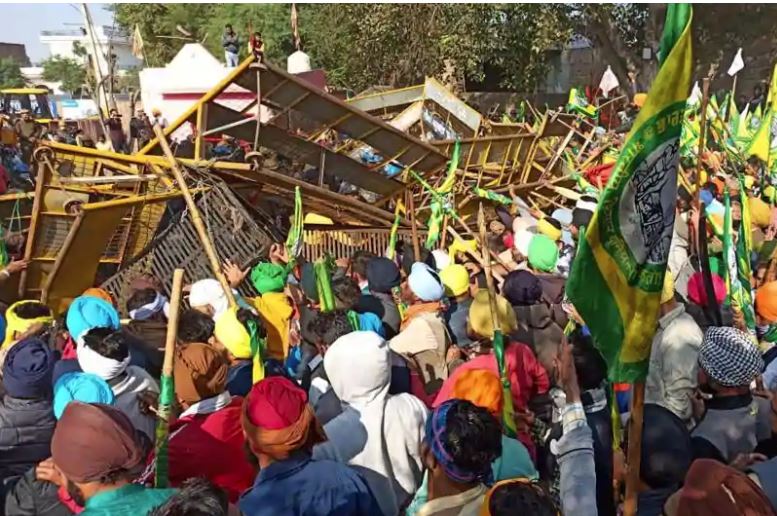 The Delhi Police has received a setback by Aam Admi Party government on Friday after Delhi’s Home Minister Satyendra Garg denied police permission to convert nine stadiums in the city into temporary jail in view of the farmers ‘Delhi Chalo’ protest march against Centre’s three controversial farm laws. The Delhi Police on Thursday had sought permission from the Delhi’s AAP government to use the nine stadiums in the city as a temporary jail.

On Thursday, Delhi chief minister Arvind Kejrwal had also backed the farmers, tweeting, all three agricultural laws are anti-farmers. Instead of allowing farmers to protest peacefully, water cannons are being used against them. Protesting peacefully is farmer’s constitutional right. This is absolutely wrong.

Rejecting the police permission in its order, the AAP government replied that the farmer’s demands are valid and should be accepted immediately. The Dilli Chalo March is absolutely non-violent for which the farmers cannot be put in jail. Putting farmers in jail is not the solution. It is the constitutional right of every Indian to agitate in a non-violent way.

By late evening on Thursday, the thousands of Punjab farmers moved closer to the national capital. Following which the Delhi Police has deployed heavy security at the Singhu Border connecting Delhi and Haryana where there was a clash between the farmers and the police. Stopping the farmers on their way, the police used water cannons and barbed wires. On Thursday, the police had booked 105 farmers who were managing to enter Delhi from Jantar Mantar and Majnu Ka Tilla.

Earlier, the farmers of more than thirty organizations, had decided to march towards Delhi via the Laldu, Shambhu, Patiala-Pihowa, Pataran-Khanouri, Moonak-Tohana, Ratia-Fatehabad and Talwandi-Sirsa routes. Farmers have gathered on their tractor-trolleys with rations and other essentials for the ‘Delhi Chalo’ march.

The Haryana government has also implemented Section 144 in many areas to stop staging protests and the farmer’s gathering. Farmers are demanding withdrawal of new agricultural laws, claims that the new law will end the system of minimum support price.

Delhi Metro services from neighbouring cities to the national capital will remain suspended today in view of the ”Delhi chalo” protest march. Tensions remain at boundaries connecting to Delhi.